K B Thompson & J A Wright

A critical examination of the past century, mostly reliant on the works of Carroll Quigley, the esteemed and highly-decorated professor who wrote Tragedy & Hope. 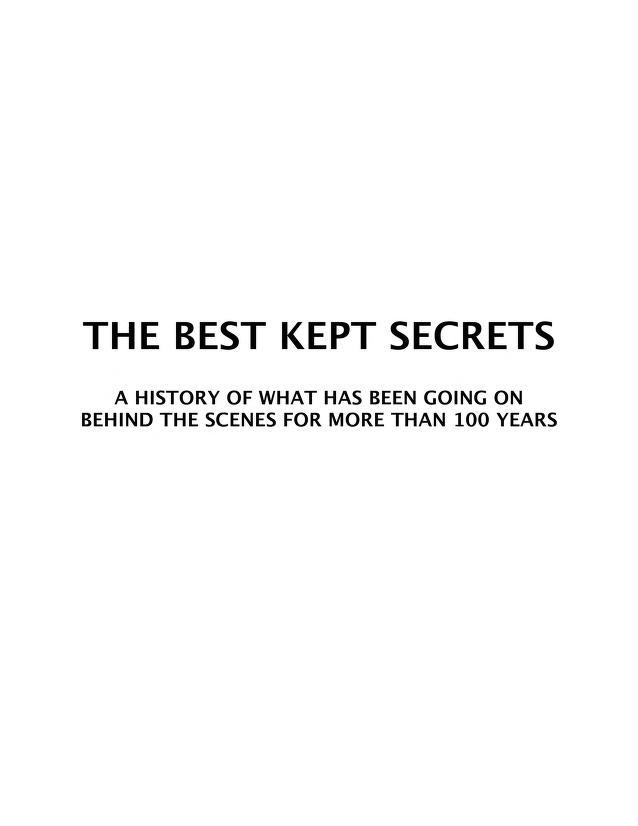 This Brother-Sister duo has dedicated themselves to researching corruption and shining light on information that very few people realize. This research is hereby placed in the public domain. It is hoped that free and easy access to this document will enable those who value freedom to reach a deeper and more coherent understanding of the corruption happening behind the scenes that continues to infringe on their liberty.

First off, this document is for anyone interested in understanding how and why things are the way they are. It provides lessons in history that were never taught in school, and exposes a secret history of our World that no one is supposed to know about. The information contained within these pages is well documented in the historical record. Second, this document is FREE. There is no agenda except to hopefully shine some light on what has been going on secretly behind the scenes for over 100 years with few people even realizing. Third, every effort has been made to describe and to analyze, not to give personal opinion or beliefs.

It begins with a historical look at one of the best-kept secrets of all time, and then examines a wide range of seemingly unconnected topics to include banking, medicine, media, education, cancer research, subversion, pharmaceuticals, politics, vaccines, foreign policy, war, and many other key aspects of American society---you will see that it is all interrelated. And together, it tells the much bigger story of the well-documented existence of a solidly entrenched secret network, concealed from public gaze, that has been---and is---profoundly shaping our World behind the scenes.

This document provides answers to anyone interested in understanding the real World of today; if you have ever wondered what's really going on in this world or where exactly things are headed, then this document is for you.

In 1965 one of the nation's leading historians quietly finished the last draft of a massive 1311-page book on world history. He walked over to his typewriter and secured the last pages of the book and placed them into a small box and wrapped it for mailing. He then walked to the Post Office and mailed the final draft to his publisher in New York City. The editor was somewhat overwhelmed and perhaps even inhibited by the scholarly treatise. The last thing he wanted to do was to read the huge draft. He knew and trusted the professor.

After all, he was one of the leading scholars in the western world. They had been acquaintances for several years. He had already signed an agreement to publish the book before it was finished. He had read several chapters of the early draft. They were boring, at least to him. He decided to give the book to a young editor who had just been promoted to his assistant. The young editor was also overwhelmed but happy to oblige the Senior Editor. The young editor was unaware of the importance of the manuscript and of the revelations which it contained. To the young editor this was just another textbook or so he thought.

Somehow one of the most revealing books ever published slipped through the editorial offices of one of the major publishing houses in New York and found its way into the bookstores of America in 1966. The above historian was Dr. Carroll Quigley and the book he wrote was entitled, Tragedy and Hope: A History of the World in Our Time. It was published in 1966 and is clearly one of the most important books ever written. Professor Quigley was an extraordinarily gifted historian and geo-political analyst. The insights and information contained in his massive study open the door to a true understanding of world history in the nineteenth and twentieth centuries. It is a work of exceptional scholarship and is truly a classic.

Knowledge of who Dr. Carroll Quigley was is essential for understanding the real world of today. His close relationship with a secret group of elites and his approval of its aims made it possible to provide an insider's analysis of the minds and methods of this global elite. Without this knowledge, the actions of those who dominate the U.S. government and the Western world would not make as much sense. With it, everything falls into place.

Using Quigley's work as a starting point, this document will highlight the extensive history of a small group of dominant men that were able to secretly secure control of local, national, continental, and even global policy at the turn of the 20th century. Then by examining the well documented history of our nation's educational, financial, medical, media, governmental, pharmaceutical and political system, one can understand the enormous control this secret network wields behind the scenes, and finally make sense of why things are the way they are in America---and the future that is being shaped for us.

Carroll Quigley was no wild-eyed conspiracy theorist. Quite the contrary, Quigley was a prominent historian who specialized in studying the evolution of civilizations as well as secret societies. Dr. Quigley studied history at Harvard University, where he earned his bachelor's, master's, and PhD degrees. He taught at Princeton University, Harvard University, and the School of Foreign Service at Georgetown University. He was the author of the widely used textbook Evolution of Civilization. He was a member of the editorial board of the monthly periodical Current History. He had done extensive research in the archives of France, Italy, and England. He was a member of the American Association for the Advancement of Science, American Anthropological Association and the American Economic Association. For many years he lectured on Russian history at the Industrial College of the Armed Forces and on Africa at the Brookings Institution. He worked as an advisor to the US Defense Department and the US Navy. In 1958 he served as a consultant to the Congressional Select Committee which set up the National Space Agency. He was a frequent lecturer and consultant for such groups as the Industrial College of the Armed Forces, the Brookings Institution, the U.S. Naval Weapons Laboratory, the Naval College, the Smithsonian Institute, and the State Department.1 This was an individual that President Bill Clinton, on numerous times during his presidency, publicly paid homage to, for the influence that Dr. Quigley had on his life. Dr. Quigley was also closely associated with many of the family dynasties of the super-rich. In short, Carroll Quigley was a well- connected and well-credentialed member of the world's money power structure and Ivy League society.

Dr. Quigley, has provided a great contribution to our understanding of modern history which was presented in his historical works, to include, Tragedy and Hope, A History of the World in Our Time and The Anglo-American Establishment. His disclosures placed him in such potential danger from an Establishment backlash, so much so that the latter was never published in his lifetime. He gained access to evidence from people directly involved with the secret 'network' that no outsider had ever seen. In fact, he admits that he was even permitted for two years to examine its papers and secret records. Quigley's exposé -- together with his Tragedy and Hope -- is unique among historical works in that it provides a detailed and verifiable account of the origins, development and aims of a secret network of organizations created for the purpose of world domination by certain international financial interests.