Brainwashed Into Slavery (1949) by Kenneth Goff

This remarkable book written by a man who testified in congress lays-bare many aspects of the psychological, politicial, cultural and social-engineering and programming which we have seen occur over several decades and right up to the present day. Highly-important and a must-read especially for understanding the cultural absurdities of the modern world. Exposes the dark underbelly of the so-called "social sciences" and "mental-health awareness" programmes, and how they are used as a tool against the masses. 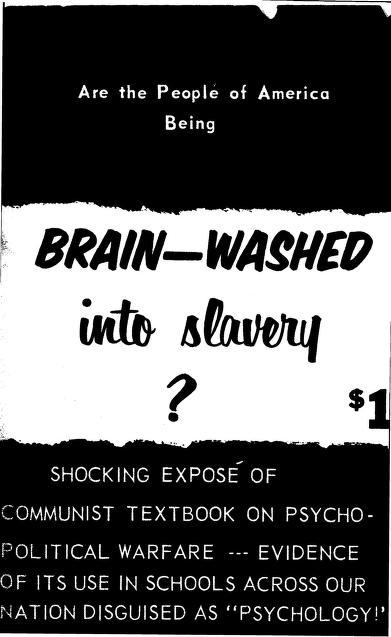 From May 2, 1936, to October 10, 1939, I was a dues-paying member of the Communist Party, operating under my own name Kenneth Goff, and also the alias John Keats. In 1939, I voluntarily appeared before the Un-American Activities Committee in Washington, D. C., which was chairmaned at that time by Martin Dies, and my testimony can be found in Volume 9 of that year's Congressional Report.

During the period that I was a member of the Communist Party, I attended their school which was located at 113 E . Wells St., Milwaukee, Wisconsin, and operated under the name Eugene Debs Labor School. Here we were trained in all phases of warfare, both psychological and physical, for the destruction of the Capitalistic society and Christian civilization. In one portion of our studies we went thoroughly into the matter of psychopolitics . This was the art of capturing the minds of a nation through brainwashing and fake mental health-the subjecting of whole nations of people to the rule of the Kremlin by the capturing of their minds. We were taught that the degradation of the populace is less inhuman than their destruction by bombs, for to an animal who lives only once any life is sweeter than death. The end of a war is the control of a conquered people. If a people can be conquered in the absence of war the end of the war will have been achieved without the destructions of war.

During the past few years I have noted with horror the increase of psychopolitical warfare upon the American public . First in the brainwashing of our boys in Korea, and then in the well-financed drive of mental health propaganda by left-wing pressure groups, wherein many of our states have passed Bills which can well be used by the enemies of America to subject to torture and imprisonment those who preach the gospel of our Lord and Saviour Jesus Christ, and who oppose the menace of Communism. A clear example of this can be seen in the Lucille Miller case. In this warfare the Communists have definitely stated : "You, must recruit every agency of the nation marked for slaughter into a foaming hatred of religious healing.

"Another example of the warfare that is being waged can be seen in the attempt to establish a mental Siberia in Alaska, which was called for in the Alaskan Mental Health Bill. A careful study of this Bill will make you see at once that the land set aside under the allotment could not be for that small 'territory, "and the Bill within itself establishes such authority that it could be turned into a prison camp under the guise of mental health for everyone who raises their voice against Communism and the hidden government operating in our nation.

This book was used in underground schools, and contains the address of Beria to the American students in the Lenin University prior to 1936. The text in the book in general is from the Communist Manual of Instructions of Psychopolitical Warfare, and was used in America for the training of Communist cadre . The only revision in this book is the summary, which was added by the Communists after the atomic bomb came into being. In its contents you can see the diabolical plot of the enemies of Christ and America, as they seek to conquer our nation by subjecting the minds of our people to their will by various sinister means.

This manual of the Communist Party should be in the hands of every loyal American, that they may be alerted to the fact that it is not always by armies and guns that a nation is conquered.