Home Books Your Life Is Their Toy - Merchants in Medicine (1948) by Emanuel M. Josephson

Your Life Is Their Toy - Merchants in Medicine (1948) by Emanuel M. Josephson

Your Life Is Their Toy: Merchants in Medicine (1948)

Your Life is Their Toy: Merchants in Medicine - Emanuel M. Josephson, second edition (1948) Book by Josephson on the elite agenda in medicine and the medical industry. This is a journey through the less than perfect and altruistic members of the medical profession. Case histories, rackets and quackery.

"The bane of modern medicine is a merciless commercialism."

"At the present time the electorate of the American Medical Association is apathetic and inarticulate. . . . It is allowing the medical politicians to run things about as they please, and official spokesmen ... hurl their thunderbolts of wrath at all who differ with orthodox doctrine."

"'Apathetic and inarticulate?' 'Muzzled' would have been a truer word" heatedly editorialized." 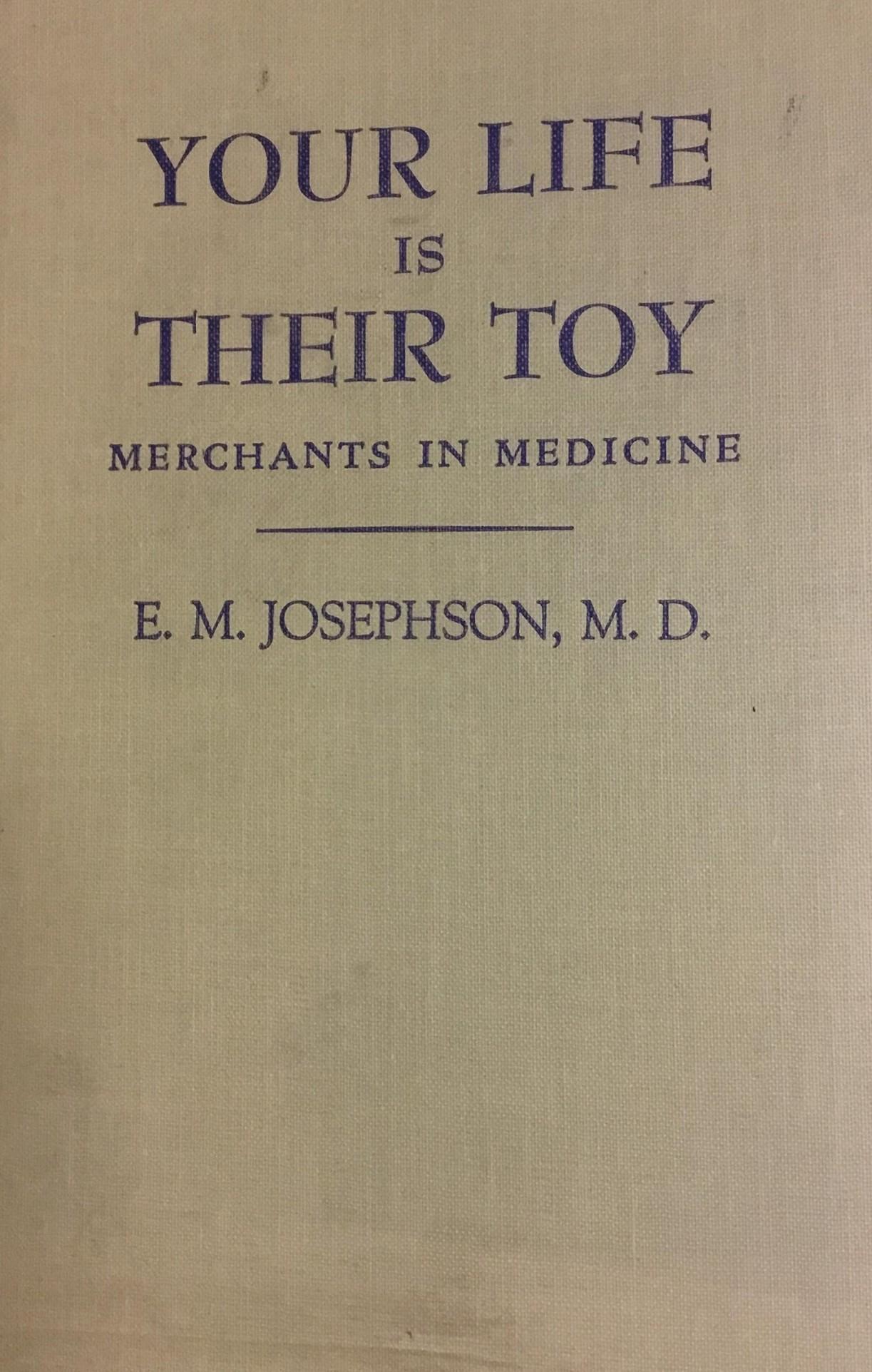 DURING the past century there has been a great improvement in the art of medicine. Some of this improvement does not represent a real advance in medical science, but constitutes the process of retracing ground that was lost when young medical science arrogantly threw aside the age-old tradition of medicine that accumulated and was handed down since the origin of man. But real advance has been made. If this aspect of the subject is slighted, it is not because of failure of appreciation of it. The attitude adopted is prompted by a realization of how much greater might have been the advances of medicine if the abuses discussed did not exist; and by an appreciation of how much needless misery and inexcusable suffering might have been spared mankind.

Health and life are man's most precious possessions; and anxiety to preserve them is natural. It is not surprising, therefore, that they have been exploited since time immemorial. Every age has had its charlatans, quacks and medicine men.

Much in the same measure as social organization has attained its highest point in the present era, the exploitation of health and life today has reached its zenith. Never before in history has there arisen such an extensive conspiracy about the problem of public health of entire nations, involving well organized, opposing political and commercial groups.

The consequence of this welter of exploitation is the sacrifice of human comfort, happiness, health and life. It can not be gainsaid that the average span of life has been greatly lengthened in the past century. But it also can not be denied that mankind could be spared much misery, maiming and suffering if the rackets revolving about health could be eliminated.

Mankind has felt quite helpless before these rackets, though their existence long has been surmised. But the attitude adopted has been much like that of the ostrich:

"Why shall we face the horrors of the situation and permit ourselves to develop a fear and consternation of the medical care and institutions which we must accept when ill? It will only aggravate matters."

This attitude implies a failure to realize that most of these rackets will shrivel and vanish when exposed; and the balance can be destroyed easily by the force of public opinion and action intelligently directed. It is my purpose to expose them and to point out how the public can act to protect itself.

A word of explanation is in order regarding my use of the word "racket." I use it in the colloquial or slang senses, in all their shades of connotation. As defined in the Practical Standard Dictionary, these senses are as follows:

There should be no difficulty in judging from the context which sense it is desired to convey. Some of the passages undoubtedly will be resented and regarded as exposing their subjects to derision. But I say truthfully and sincerely that my motive is not malice. It is the desire to protect the health and life of the public and to see justice done.