The Roosevelt-Delano Dynasty has played a far more important role in the history of the United States than is suspected even by supposedly well-informed folk. Their role in the future may be a very fateful one now that it has become an integral though subsidiary part of the Rockefeller (Standard Oil) Empire. The time has arrived when it ie imperative that the nation be keenly aware of it.An evaluation of the significance of the Roosevelt-Delano Dynasty for the past, present and future of the United States hse been impossible hitherto because the data has been carefully hidden in the family records and has not been available to the public. 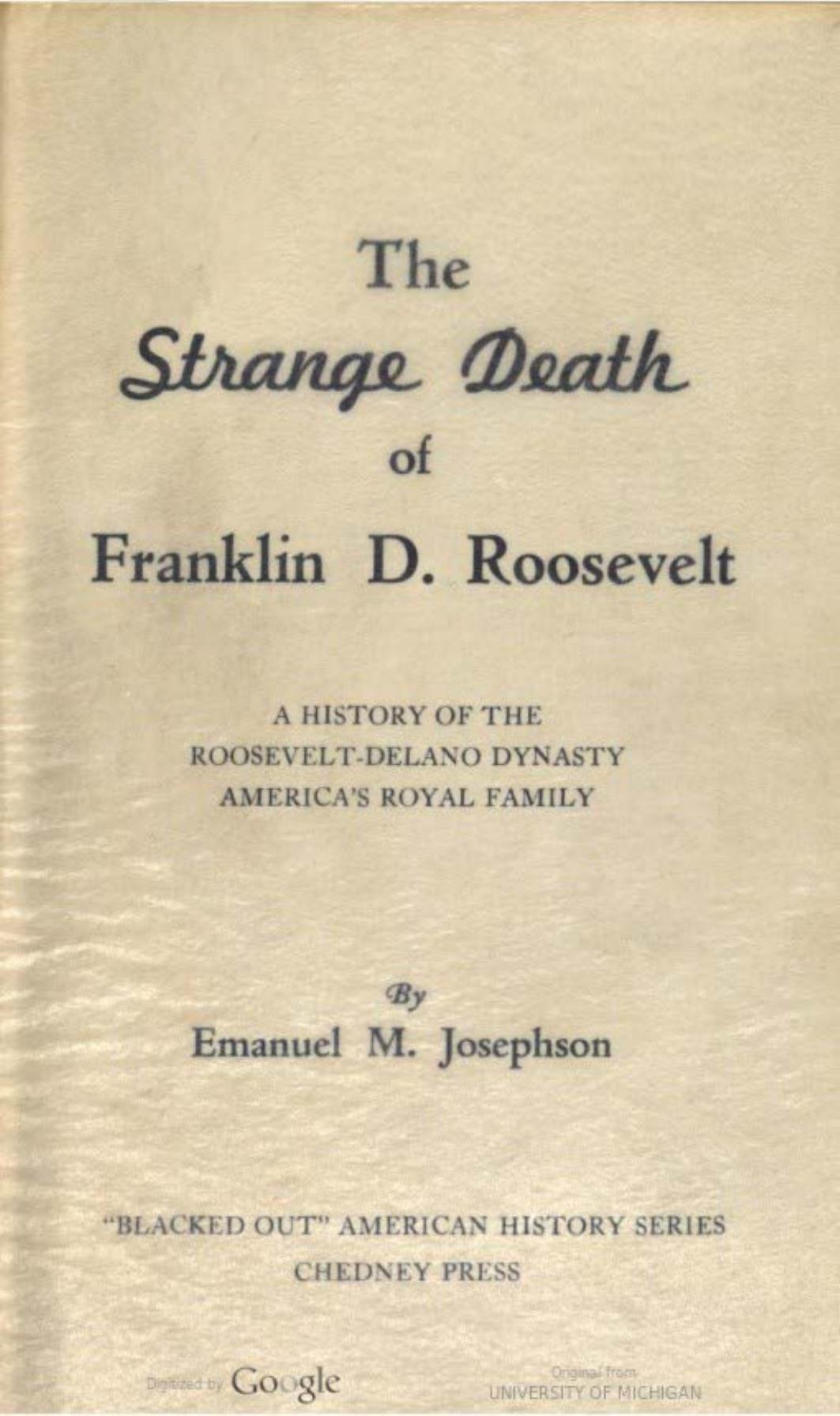 INTRODUCTION TO THE 1959 REVISED EDITION

The background of the conspiracy that was the basis of the power of the Roosevelt-Delano Dynasty, and that made possible its control of the destinies of our country, is related by the author in his ROOSEVELT$ COMMUNIST MANIFESTO (Chedney Press, 1955). It portrays the role played by the Dynasty in the Illuminist-Socialist-Communist-"One World" dictatorship conspiracy.

The second half of that volume contains what is probably the most important document in American history. It is the reprint, in full, of the 1841 publication by mentor-cousin, Clinton Roosevelt, entitled THE SCIENCE OF GOVERNMENT FOUNDED ON NATURAL LAW. It is largely an adaptation to the American scene of the conspiracy published in 1776, in Germany, by Adam Weishaupt, a renegade Catholic who bad been trained by the Jesuits. He was the founder of the Order of llluminati, which later became the Communist Party. Weishaupt is the real father, or grandfather, of modem-day Communism. And he was the preceptor of Moses Mordecai Marx Levy alias Heinrich Karl Marx.

Clinton Roosevelt was one of the group of American Illuminists, self-styled "liberals", that included Horace Greeley, Charles A. Dana, and many scions of America's "first families" who helped finance the activities of Karl Marx and his associates. His SCIENCE OF GOVERNMENT was published as a blueprint of a conspiracy to nullify the Constitution and Sovietize the U.S.A. Published in 1841, it contains the detailed plan of the New Deal and NRA, drawn up ninety-two years before his cousin, President Franklin Delano Roosevelt, launched the conspiracy.

Clinton Roosevelt's publication is so important for an understanding of our national history, and of the ills that have befallen us, that it would have been a disaster had its well-planned blackout succeeded as a result of disintegration of the pulp paper on which it was originally published. The result would have been complete censorship and suppression of one of the most important phases of our national history and the history of the world.

The more up-to-the-minute phases of the conspiracy,  the author details in his ROCKEFELLER "Internationalist", The Man Who Misrules The World (Chedney Press, 1952) and in subsequent columns.A fourth volume is under consideration by the author, on the part played by the conspirators in the engineering of the Civil War, and on the elections and assassination of Abraham Lincoln.Material revisions and additions have been made in the text, on the basis of subsequent researches and investigations. This is especially true in the chapter on The Odd Ailments & Strange Death Of F. D. R. It has been largely rewritten and amplified with additional data, which casts an even stranger light on this curious affair.