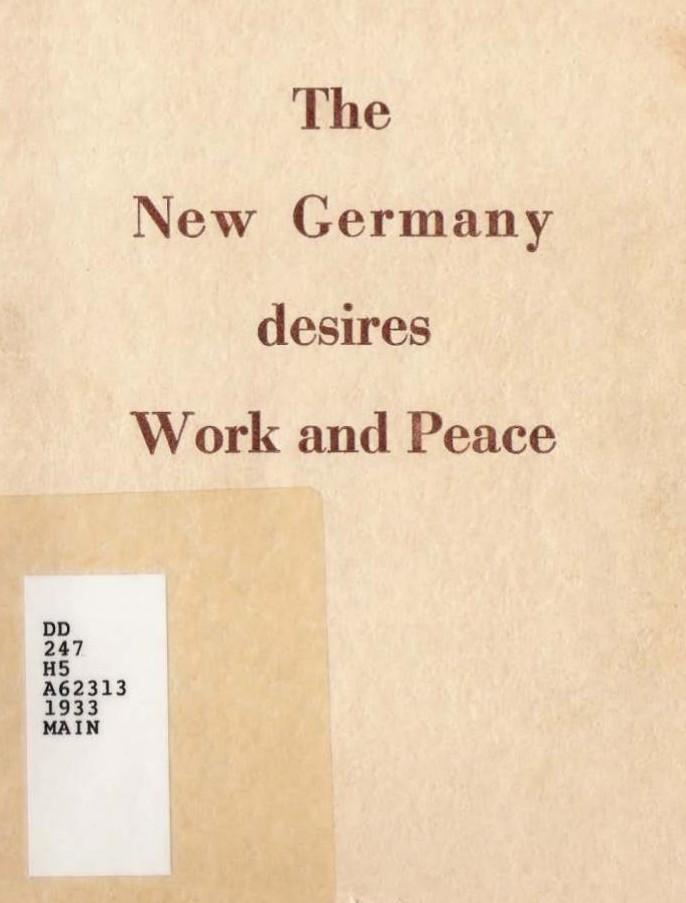 The above is the title given to this collection of the speeches which the German Chancellor, Adolf Hitler, has delivered since his entry into office on the 3041 January 1933. That this Germany wishes for work needs no further demonstration. Nearly five million men and woman are struggling to regain the positions they have lost in factories and offices. Unemployment, that terrible disease of our times, keeps them idle. The governments of the past, who, along with their system, have been superseded by National Socialism, were embarrassed and inactive when faced by this pressing problem. The Hitler Government have made their plans and declared war on unemployment. It is not with outside aid that they intend to overcome the evil; they are not going to the other nations of the world, as their predecessors did, to beg humbly for protection and assistance. They know that crises and despair are prevalent in every country, and for this reason they have determined to master the evil in their own way and on their own initiative. The return of two million men and women to work bears witness to the fact that Hitler's attempt to solve the problem of unemployment has not been without success.

But just as this New Germany desires work, it also desires peace. It has announced to the whole world, through the mouth of the Chancellor himself, speaking in the Reichstag, that it has nn aggressive intentions whatever, that it does not wish to provoke anyone nor to stir up unrest. It wishes to pursue its work in peace and in a spirit of deep moral conviction, in order to make sure of its daily bread. It stands unarmed before the world, and has no other means of proving the genuineness of its intentions but its industry and assiduity. It is firmly convinced that the world cannot regard its claims with indifference.

When this Germany announces that it will not sign any treaties that cannot be observed, it only does so because it intends to observe faithfully all treaties that have once been signed. It is an orderly and disciplined Germany in which authority rules that has been awakened by Adolf Hitler and his movement, and is endeavouring to gain the confidence and understanding of the world.

The world is still suspicious; with the exception of a few men who have had the courage to look the facts in the face, the world has no understanding whatever, or at best a very poor one, for the meaning of the events that have taken place in Germany. Then only will it ready appreciate the overwhelming importance of the internal revolution in Germany when Europe's need has become so great that people everywhere begin to realize that, without mutual understanding and respect between nations, peace cannot flourish and that the scourge of unemployment will continue to afflict the nations of the world

The speeches delivered by Adolf Hitler since the 30th January 1933 are eloquent proofs of Germany's desire for work and peace. May the world learn at least one thing from them, namely, that the German nation once more deserves to be respected by the other nations in the same way as it can now once more respect itself.