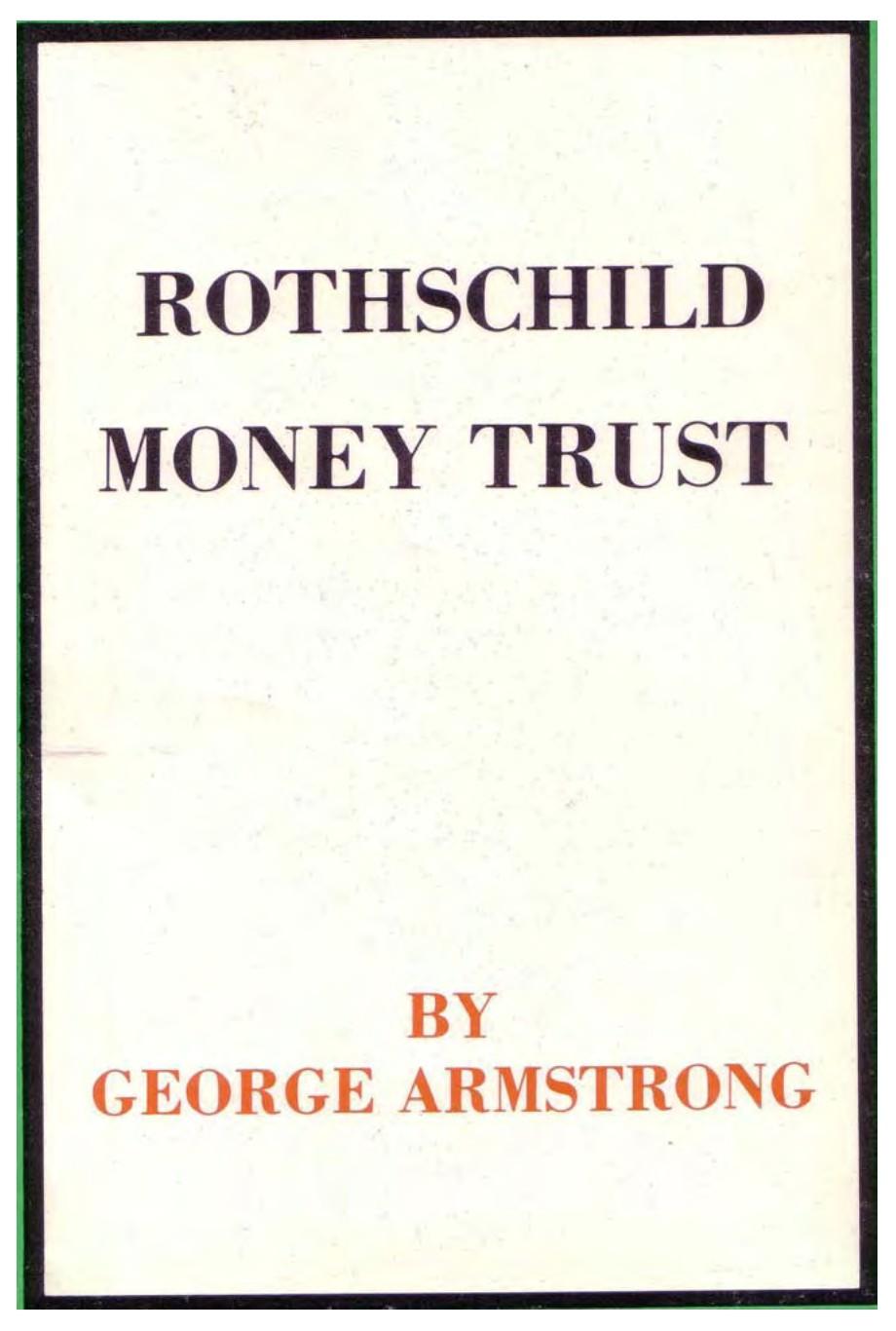 Mayer Amschel Rothschild, the founder of the Rothschild fortune, at the time of his death in 1812, created a trust of his estate, by will, for the elevation of the Jewish race and the establishment of a Jewish World Empire. The cardinal principles of the trust were secrecy, that the estate should be kept intact as a unit, that the heirs and their heirs should have only a communal interest in it, and that the estate as a whole should be governed by the eldest son of the eldest son unless a majority of the heirs determined otherwise.

The estate has been preserved and managed since his death as a unit in pursuance of the provisions of his will. There are now several hundred heirs, for the family is a prolific one, but the estate is communal and still under the management of one head. So far as known, the provisions of the wills of the members of the family still contain in substance the directions of the founder of the fortune.

History affords but meager information regarding the rulers of this fortune and the extent of it, because of their secretive methods. No inventory has ever been filed and no division has ever been sought by any heir.

Most of the histories of the Rothschild family are either Jewish or strongly pro-Jewish. While they are extravagant in praise of the virtues of the different members of the Roths- child family, they are rather meager in facts. The facts herein related have been gleaned from many sources and are based on information believed to be reliable.

We do not know the extent of the founder's fortune at the time of his death in 1812, nor do we know the present magnitude of it, but apparently it represents about one-half of the wealth of the world.

This huge fortune has been devoted with great shrewdness and energy to the purpose of exploiting the Gentiles in all the countries of the globe. The methods employed are the manipulation of currencies, speculations on the exchanges, and wars. The Rothschilds by these operations profit enormously because they have the power by virtue of their immense wealth and political power, to put prices up or down at pleasure. It is for these reasons that we have had most of our wars and depressions.

The protocols and the communists code, which are identical in purpose and intent, represent their plan for the conquest of the world. Both of these codes were published subsequent to Mayer Amschel's death, but some of the protocols appear to have been in existence prior thereto. They, however, represent his principles as shown by all that we know of him.

This book is not written in a spirit of anti-Semitism, for I have Jewish friends that I do not wish to injure. It is written in the hope that it may be helpful in solving our Jewish prob- lem peaceably and by appropriate legislation. To the extent that the remedies herein suggested may contribute to that end they will be helpful to the Jews as well as to the balance of us, for it is certain that the people of this country will never meekly submit to slavery.

In writing and publishing this book I am inspired by no other motive than to render a service to my country. I realize that I am taking some risk in doing so—at least that of persecution. Adequate provision has been made for the publication and distribution of this book regardless of the author.