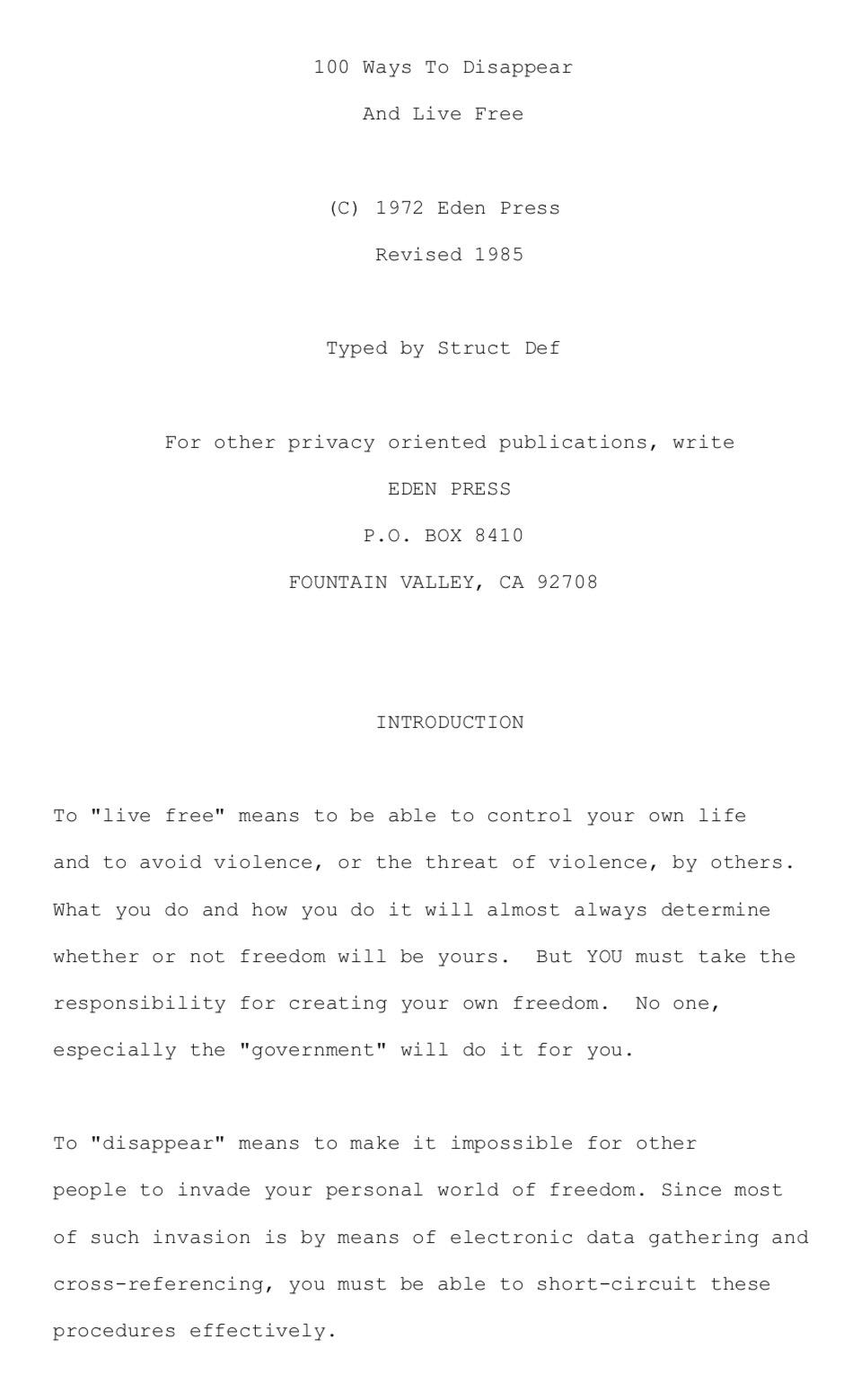 To "live free" means to be able to control your own life and to avoid violence, or the threat of violence, by others. What you do and how you do it will almost always determine whether or not freedom will be yours. But YOU must take the responsibility for creating your own freedom. No one, especially the "government" will do it for you.

To "disappear" means to make it impossible for other people to invade your personal world of freedom. Since most of such invasion is by means of electronic data gathering and cross-referencing, you must be able to short-circuit these procedures effectively.

The most efficient method today is through the use of what we call "alternate identification". If the new names and numbers you plug into the networks don't match the old ones, you have not only "disappeared", but have also been "reborn". And being reborn means leaving your past records where they can no longer affect you and your lifestyle. This "disappearing" of individuals is obviously discomforting to institutions and governments determined to control personal activities in the Land of the Free. To them it appears downright seditious, since in reality their power depends directly on the number of people they can control -- through computerized records, of course.

To those who actually "disappear", however, the act is one of tremendous personal liberation. Free men owe very little to those who restrict opportunities on the basis of past records. An extreme example, which nevertheless applies to all of us, is this: When a person convicted of a felony has served his full sentence, is he then "free"? Hardly. What he will experience is really a LIFE SENTENCE of second-rate opportunity.

And what happens to the convict, in practice, happens to everyone who manages to have negative personal information placed in his "records". When it comes to the point of a person's having to live with a condemning past and ever- narrowing opportunities, it becomes easily understandable why he should be willing and anxious to scuttle his labeled identity and take on another.

Becoming a new identity, however, involves many things and requires careful attention to detail, as we shall show. At the heart of this process, though, is the ATTITUDE a person must assume if he is to make it work. He must forget about his "government"; he must become his own government, answerable only to himself, with his own rules, laws, and systems of behavior. This is an existential "moment" few are disciplined enough to experience, but it can be done.

The result will be a growing detachment from BIG BROTHER and a corresponding increase of personal freedom. The individual needn't worry about what would happen "if everybody else did this" because they WON'T. The object is for individuals, acting as individuals, to declare their mental independence from whatever System is attempting to enslave them. As individuals they are the best judges of what degree of slavery they can accept, how far down the road they can go before becoming robots for BIG BROTHER. Simply put, it's the Sheep and the Wolves. The Sheep go to slaughter, the Wolves wherever they wish...

There are numerous intermediate tactics between total compliance and complete disappearance, such as refusing to give your Social Security number (or giving it incorrectly), avoiding taxes, obtaining several foreign citizenships and passports, setting up bank accounts in several other countries, and planning at least two routes of escape to other countries, but in the end you will discover there really is no freedom in the world -- YOU MUST CREATE YOUR OWN. You must learn how to protect your own rights as you define them. No one else will do it for you, NO ONE.

The object of this publication is to suggest ways an individual can, in practice, escape his past and secure a new future, on his own terms. Individuals will vary greatly in how they carry out their disappearances, and it is our hope that the ideas we present here are useful towards those ends. We make no claims of completeness or of exhausting the subject, as that could be potentially dangerous were individuals to rely solely on this information.

We must stress that everyone should think over his situation as carefully as possible, and then pick and choose which among our methods are best suited for his needs. Above all, he must begin using his head, trusting his hunches and instincts, and thinking of himself as separate, different, and even superior to those stuck in the System. He will have to become a Wolf. He must stand alone to be free.