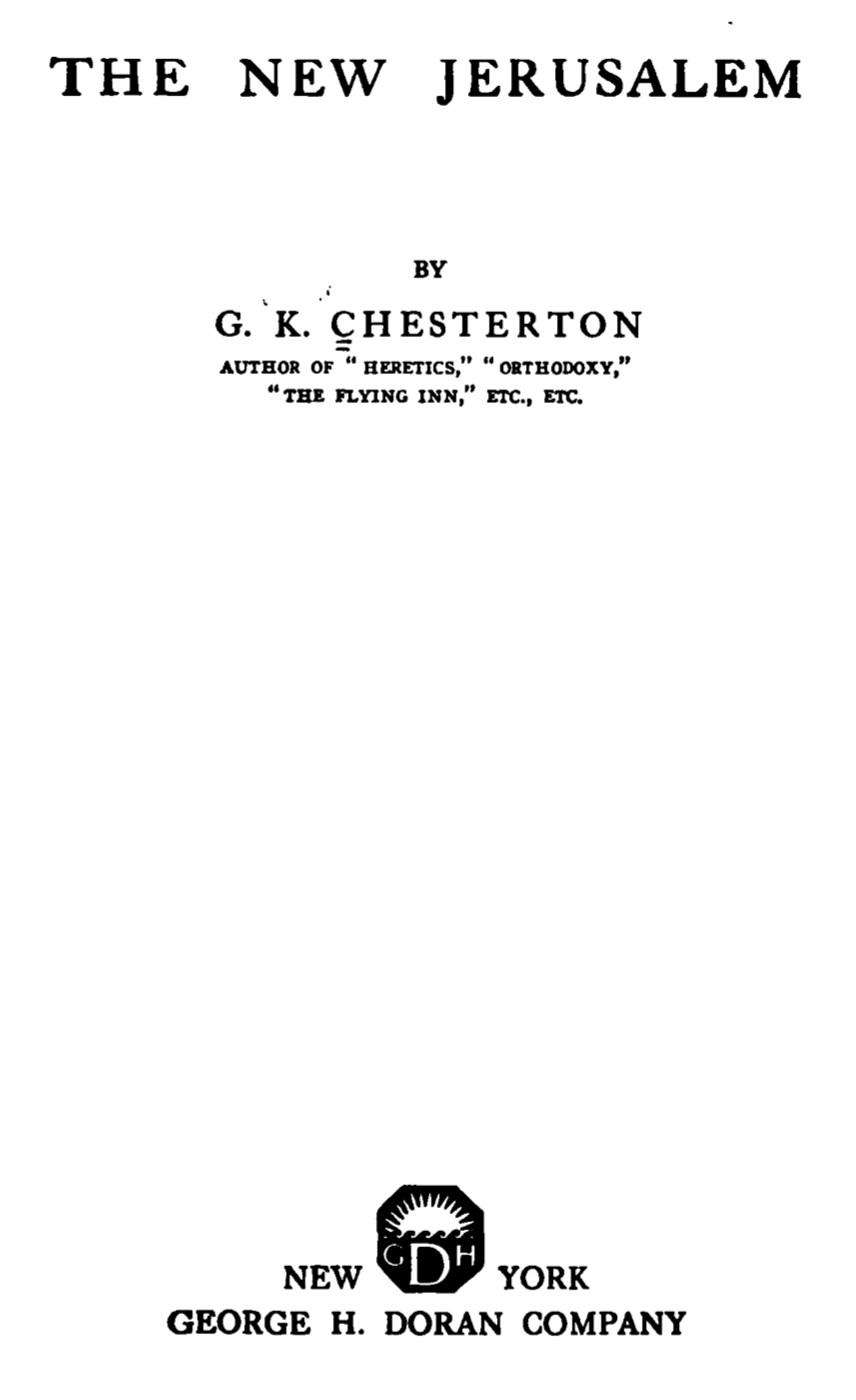 This book is only an uncomfortably large note-book ; and it has the disadvantages, whether or no it has the advantages, of notes that were taken on the spot. Owing to the unexpected distraction of other duties, the notes were published in a newspaper as they were made on the spot; and are now reproduced in a book as they were published in the newspaper. The only exception refers to the last chapter on Zionism; and even there the book only reverts to the original note-book. A difference of opinion, which divided the writer of the book from the politics of the newspaper, prevented the complete publication of that chapter in that place. I recognise that any expurgated form of it would have falsified the pro- portions of my attempt to do justice in a very difficult problem; but on re-reading even my own attempt in extenso, I am far from satisfied that the proper proportions are kept. I wrote these first impressions in Palestine, where everybody recognises the Jew as something quite distinct from the Englishman or the European; and where his unpopularity even moved me in the direction of his defence. But I admit it was something of a shock to return to a conventional atmosphere, in which that unpopularity is still actually denied or described as mere persecution. It was more of a shock to realise that this most obscurantist of all types of obscurantism is still sometimes regarded as a sort of liberalism. To talk of the Jews always as the oppressed and never as the oppressors is simply absurd; it is as if men pleaded for reasonable help for exiled French aristocrats or ruined Irish landlords, and forgot that the French and Irish peasants had any wrongs at all. Moreover, the Jews in the West do not seem so much concerned to ask, as I have done however tentatively here, whether a larger and less local colonial development might really transfer the bulk of Israel to a more independent basis, as simply to demand that Jews shall continue to control other nations as well as their own. It might be worth while for England to take risks to settle the Jewish problem; but not to take risks merely to un- settle the Arab problem, and leave the Jewish problem unsolved.

For the rest, there must under the circumstances be only too many mistakes; the historical conjectures, for they can be no more, are founded on authorities sufficiently recognised for me to be permitted to trust them; but I have never pretended to the knowledge necessary to check them. I am aware that there are many disputed points; as for instance the connection of Gerard, the fiery Templar, with the English town of Bideford. I am also aware that some are sensitive about the spelling of words; and the very proof-readers will sometimes revolt and turn Mahomet into Mohammed. Upon this point, however, I am unrepentant: for I never could see the point of altering a form with historic and even heroic fame in our own language, for the sake of reproducing by an arrangement of our letters some-thing that is really written in quite different letters, and probably pronounced with quite a different accent. In speaking of the great prophet I am therefore resolved to call him Mahomet; and am prepared, on further provo- cation, to call him Mahound.