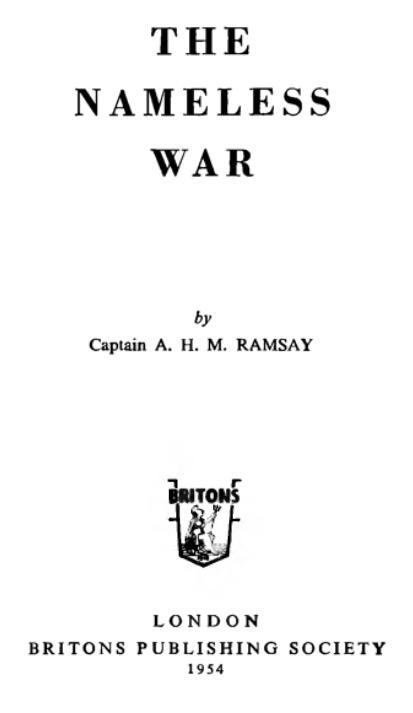 Here is the story that people have said would never be written in our time - the true history of events leading up to the Second World War, told by one who enjoyed the friendship and confidence of Mr. Neville Chamberlain during the critical months between Munich and September, 1939.

There has long been an unofficial ban on books dealing with what Captain Ramsay calls The Nameless War, the conflict which has been waged from behind the political scene for centuries, which is still being waged and of which very few are aware. The publishers of The Nameless War believe this latest exposure will do more than any previous attempt to break the conspiracy of silence. The present work, with much additional evidence and a fuller historical background, is the outcome of the personal experiences of a public figure who in the course of duty has discovered at first-hand the existence of a centuries old conspiracy against Britain, Europe, and the whole of Christendom.

The Nameless War reveals an unsuspected link between all the major revolutions in Europe - from King Charles I's time to the abortive attempt against Spain in 1936. One source of inspiration, design and supply is shown to be common to all of them. These revolutions and the World War of 1939 are seen to be integral parts of one and the same master plan.

After a brief review of the forces behind the declaration of war and the world wide arrests of many who endeavoured to oppose them, the author describes the anatomy of the Revolutionary International machine — the machine which today continues the plan for supranational world power, the age- old Messianic dream of International Jewry.

It is the author's belief that the machine would break down without the support of its unwilling Jews and unsuspecting Gentiles and he puts forward suggestions for detaching these elements.

"Captain Ramsay, a Christian gentleman of unflagging courage, believed that the war with Germany was not conceived in the interests of Britain and could lead only to the extension of Communist and Jewish power. Because he warned his fellow countrymen of the forces at work, he was put in prison without trial for 4+ years, for 'reasons' so preposterous that those who framed them dared not submit them to a court of law."

"For years Captain Ramsay had been a member of the British Parliament. His book is an analysis of the Jewish-Zionist war against Christian civilization."

The Cross and the Flag

"There is no limit to the depths of human depravity, Captain Maule Ramsay ... seems to have made a very determined attempt to plumb those depths."

"The publication of such a book, at this time, underlines the urgent need for the law to be reformed so as to make it a crime to preach racial hatred or publish libels on groups in the community."