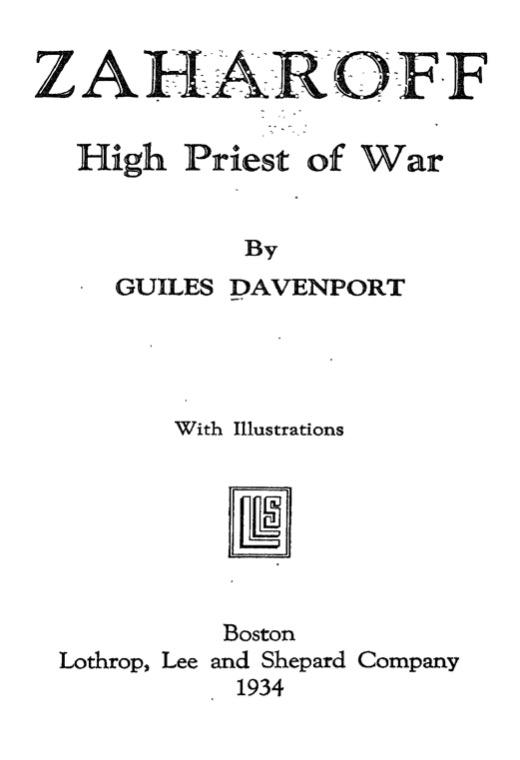 REVERSING the conventions, Sir Basil Zaharoff is already a legend. Ordinarily mortals must die to achieve the aureole and usually they are a long time dead before the fact and fancy have merged sufficiently to form a foolproof legend: yet Zaharoff, with all modesty and dignity, accomplished the task before he had reached the half-century mark. That was thirty-four years ago. Not even the most, critical of historians will deny that thirty-four years is a long time in the life of a gun-maker.

I expect that the pacifists and those who make money in the anti-war business will seize upon this book and claim it as their own. At least it is worth a good wager that they will use its facts and implications as arguments for pacifism. Partly because of this possibility and partly because I enjoy a paradoxical state of mind, i wish to make it plain that I am not a pacifist. Furthermore, 1 would cheerfully engage in another war if it would end the business of making war for profit. My particular objection to the Zaharoffs is based upon the incredible cruelty of their political programs which stand vis-a-vis their martial aims but always in n shadow.

Yet wars will continue to be made and some of them will have ample excuse. Political and social alignments are already established in the modern world, each carrying high upon their banners their diverse dogmas, which make conflict inevitable since every major political premise must depend upon force to sustain and expand itself: and if they do not employ force for sustenance and expansion, they must use it for defense. The pacifists complicate such a situation no less than the militarists since it seems one of their principal characteristics to preach disarmament in one country while lauding militarism in another.

Zaharoff and all his crowd are bound to profit; by such a condition, and until the issues involved lire resolved there can be no rational excuse for disarming below the danger point. In the meantime we would do well to arm ourselves. Until the the Zaharoffs and that of international bandits who intend to profit by the world's disorder are exorcised by a thorough thrashing, we are in danger of assault.

The apocalyptic peace is one thing: the menace of a program of world violence ultimating in a new type of political domination is another.