World Revolution - The Plot Against Civilization (1921) by Nesta Helen Webster

World Revolution: The Plot Against Civilization (1921) 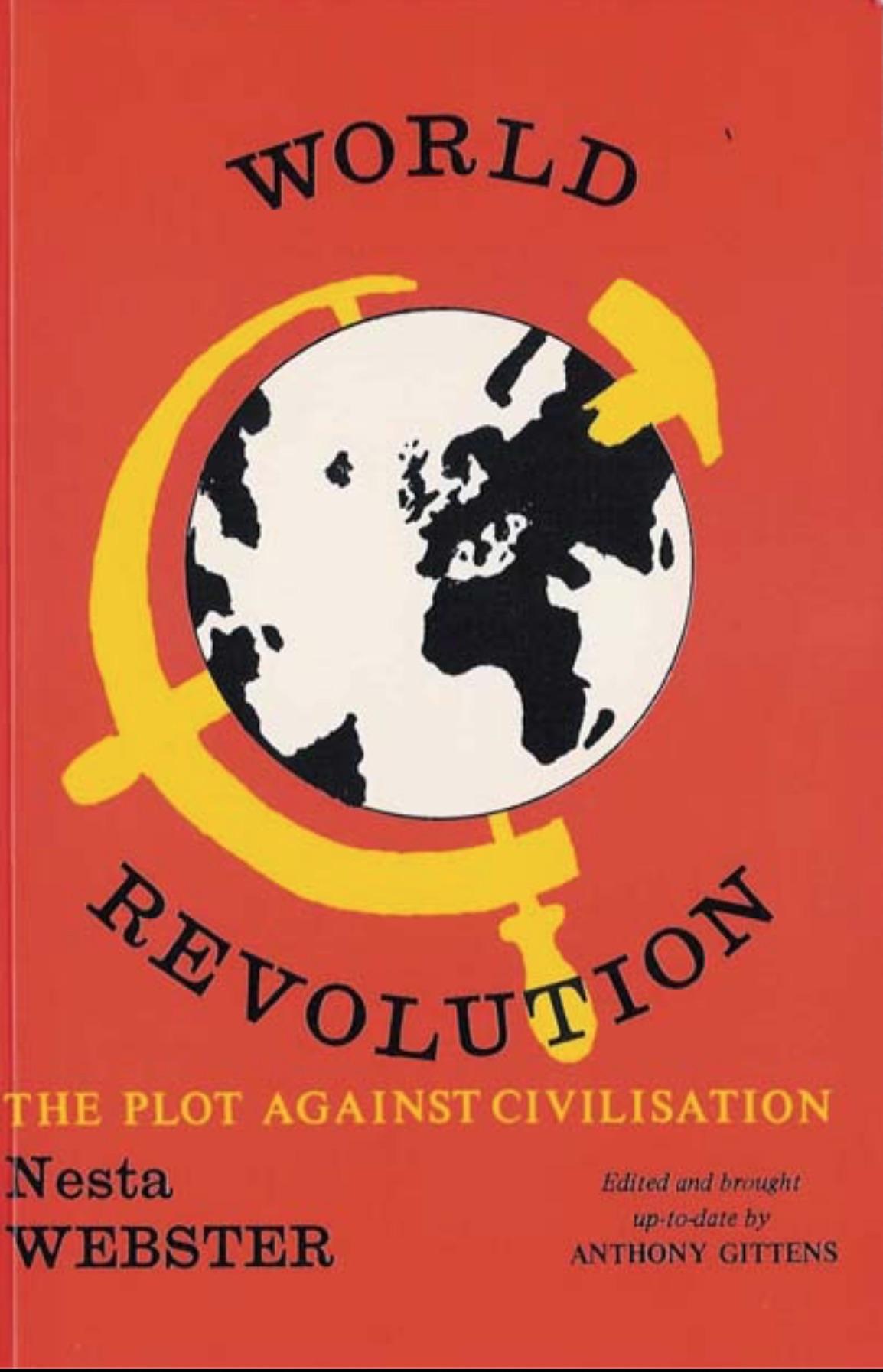 Nesta Helen Webster (Mrs. Arthur Webster), (1876 – 1960) was a controversial author who revived conspiracy theories about the Illuminati. She argued that the secret society's members were occultists, plotting communist world domination. According to her, their international subversion included the French Revolution, 1848 Revolution, the First World War, and the Bolshevik Revolution of 1917.

The widespread revolutionary movement of the past two centuries has been delineated and traced to its source in this exhaustive study. Dominated always by a few radical leaders, this has been spread throughout the world through the medium of secret societies. Each effort at revolution since 1780 has been definitely fitted into its place in this continuing conspiracy against civilization. Syndicalism, Socialism, Communism, Bolshevism, all are shown to trace their descent and derive their maxims from the Illuminism of the eighteenth century.

The doctrine the book seeks to establish is that a world conspiracy for bringing about the destruction of civilisation was conceived by one Adam Weishaupt, who founded a secret sect of ‘ Illuminates ’ in 1776, sent emissaries to France to indoctrinate the lodges of the Grand Orient, and finally, through their instrumentality, precipitated the Great Revolution. Further, the sect is said to have manifested its power in the activities of Babeuf and the founders of the ‘Tugendbund,’ and to number Saint Simon, Fourier, Robert Owen, the leaders of 1848, Lassalle, Marx, Bakunin, the Nihilists and Bolshevists among its servants.

‘For the last hundred and forty-five years the fire of revolution has smouldered steadily beneath the ancient structure of civilisation, and already at moments has burst out into flame, threatening to destroy to its very foundations that social edifice which eighteen centuries have been spent in constructing.’

Mrs Webster, having steeped herself in the writing of Barruel, Deschamps, and Robison, has come to believe in the existence of an ‘occult force, terrible, unchanging, relentless, and wholly destructive, which constitutes the greatest menace that has ever confronted the human race.’

The ‘light of Illuminism’ shows us, as Mrs Webster quotes with approval from a Catholic prelate, ‘deadly Illuminated Freemasonry’ as ‘ part of the system of revolutionary fraud invented and cast upon earth by Satan to compass the ruin of souls and the destruction of the reign of Jesus Christ'. In the same light Christianity appears to her as ‘a beleaguered citadel surrounded by the dark forces which have mustered for the supreme onslaught’. The real protagonists, therefore, we must assume to be Christianity and Atheism, or Christianity and Satanism. Mrs Webster, however, encourages us to think that, ‘if the people of our country will but realise the diabolical nature of the conspiracy at work amongst them, the powers of Hell cannot prevail against them.’ The theory supported by Mrs Webster makes of the world and of contemporary life an exciting battle-ground.

In a chapter entitled ‘The Growth of Socialism,’ under a sub-title headed ‘ The Philosophers,’ Mrs Webster deals in true modern propagandist fashion with Owen, Saint Simon, Marx, and others. She holds and sets out to prove that they are all part of the same story, and that the main ideas have descended in unbroken sequence from Weishaupt's Illuminati through the various revolutionary groups and agencies that have taken up the task of destroying civilization during the last 140 years.

Mrs Webster goes to history in search of ‘conspiracy’; and it must be admitted that she, like every other person who diligently looks for some particular thing in history, finds what she seeks.