Home Books What to Do With Germany (1944) by Louis Nizer 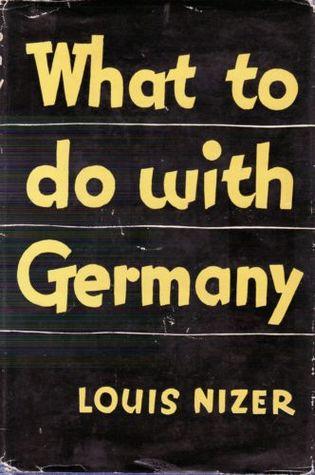 The great tragedy of the twentieth century is that peace has suffered defeats even after wars have been won for her. In 1918 an agonized world laid down its guns. Peace was here, but we turned our backs on her as though she nourished herself, as though the same intense planning and torrents of energy which win wars are not necessary to maintain peace. The Germans were democratized, but not made safe for democracy. We were smug about the newly instituted Republic as though democracy were a mere format of government instead of an expression of the people's yearning for self-regulation. As a result, within twenty years, the peace so dearly won had been squandered. Only then did we discover that our unpreparedness for peace had made that period a prelude to another war. And ironically enough we were unprepared for that, too.

During a war there is no confusion of immediate objectives. One must win-or perish. Where choice is thus limited, the temptation to procrastinate and to compromise is likewise diminished. There is a penalty of death for error or even hesitancy. But peacemaking is leisurely. It permits all the devices of indecision-commissions, committees, experiments, debates.

The day is approaching when another chance, perhaps the last chance, will be given to us to win a renowned vic- tory for peace. On that day word that the war has ended will be flashed around the world and will be echoed by gleeful church bells and hysterical whistles. Millions of hearts will stop for a second in solemn prayer. Then a wave of ecstacy will sweep across the world. Emotional riots will break out everywhere. Hundreds of New Year celebrations will be crowded into one night of delirious joy. Children, astonished by the madness of their parents, will scream and dance in contagious imitation. Churches will be crowded with worshipers too stirred to pray. Men in fits of gratitude will indulge in philanthropic orgies. Women, too pained to cry during the war, will learn to cry with overwhelming joy. There will be bonfires in our hearts and from them will ascend a wave of religious gratitude to the heavens. Peace will be here. Peace ! We will go berserk with triumph and peace. And that will be the most dangerous moment in all history !

Will we again waste the sacrifice of millions of people because we are not prepared to think? Will we simply rearrange our prejudices and reclothe our demagoguery? Or will we, with knowledge of the causes of the disaster, grimly set ourselves to the task of winning the peace and preventing World War III now?