Home Books Vices are not Crimes (1875) by Lysander Spooner

Vices are not Crimes (1875) by Lysander Spooner 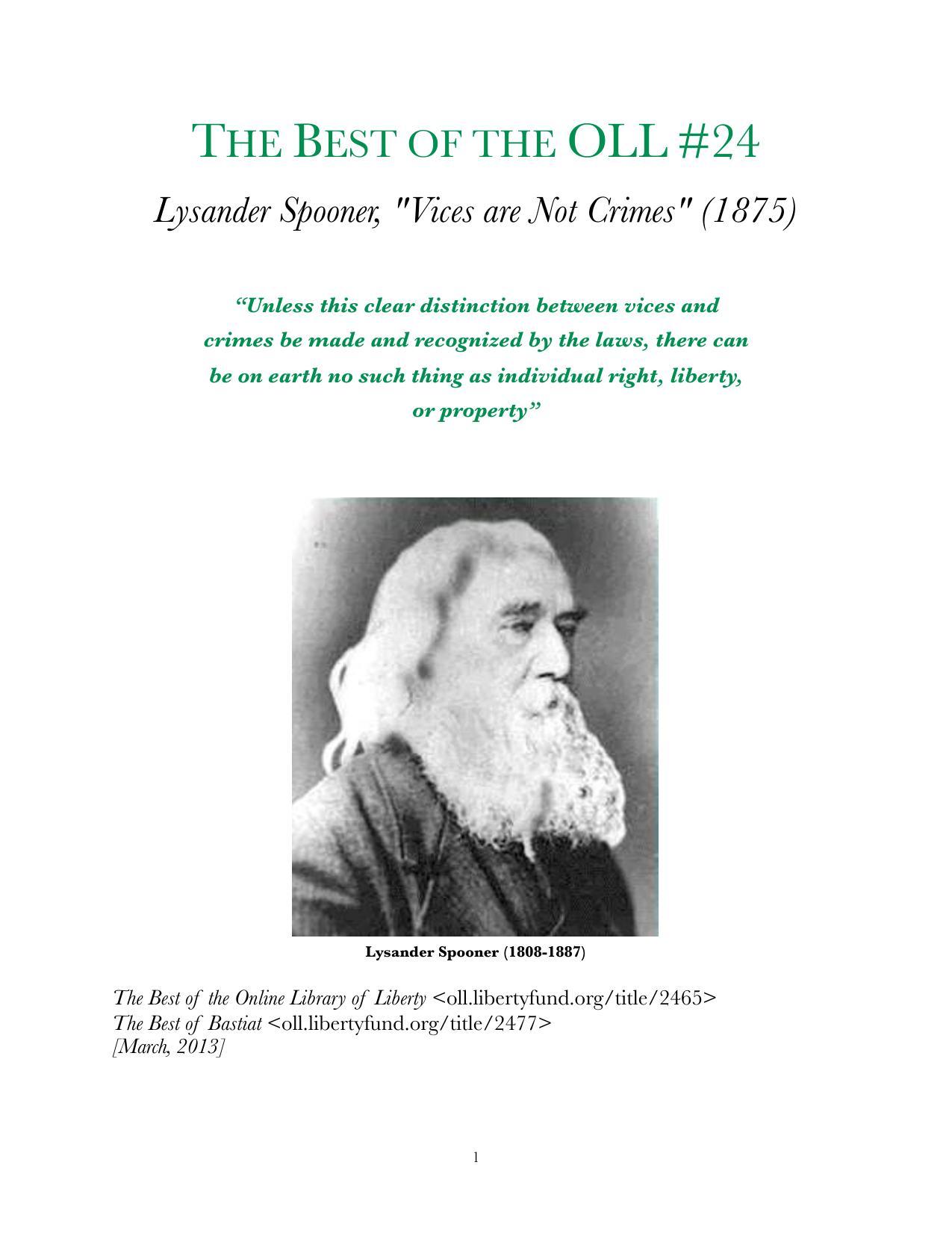 “Unless this clear distinction between vices and crimes be made and recognized by the laws, there can be on earth no such thing as individual right, liberty, or property”

Lysander Spooner (1808-1887) was a legal theorist, abolitionist, and radical individualist who started his own mail company in order to challenge the monopoly held by the US government. He wrote on the constitutionality of slavery, natural law, trial by jury, intellectual property, paper currency, and banking. Some of his most important works are An Essay on the Trial by Jury (1852), The Unconstitutionality of Slavery (1860), No Treason, No. 1, 2, and 6 (1867, 1870), A Letter to Thomas F. Bayard (1882), and A Letter to Grover Cleveland (1886).

This pamphlet comes from vol. 2 of a two volume compilation of Spooner’s shorter works and pamphlets: The Shorter Works and Pamphlets of Lysander Spooner.

The distinction Spooner makes between “vice” and “crime” is a crucial one which still has considerable relevance today. In Spooner’s day the great vice was alcohol which is why he devotes much space to discussing it. For him, vices are acts by which a person harms themselves and their property; crimes on the other hand are acts by which a person harms the person or property of another person. The latter he believes is the proper concern of the police and the courts; the former is not. According to Spooner’s theory of individual liberty it is important that each person be free to make their own mistakes, if necessary, as this is the most important means by which they learn about themselves and the world around them. He wants to see the fullest possible freedom for people so they can “be left free and open for experiment” in the way they live their lives. In other words, to be free to pursue their own idea of happiness.

Although Spooner does not use this term, he is talking about “victimless crimes” when he quotes the Latin legal maxim that “violenti no fit injuria” (to the willing no injury is done). Among these so-called “crimes” he includes consensual sex, prize-fighting, fighting duels, gambling, assisted suicide, and so on. Although American prisons were filled with people who had violated the laws against vices like these, they were not the greatest criminals. He reserved this distinction for governments which fought wars and the men who made the laws which allowed them and their friends “to usurp arbitrary power” legally.