The Totalitarian State Against Man (1938) by Richard Nicolaus Coudenhove-Kalergi

The Totalitarian State Against Man (1938)

Translated by Sir Andrew McFadyean, with an introduction by Wickham Steed 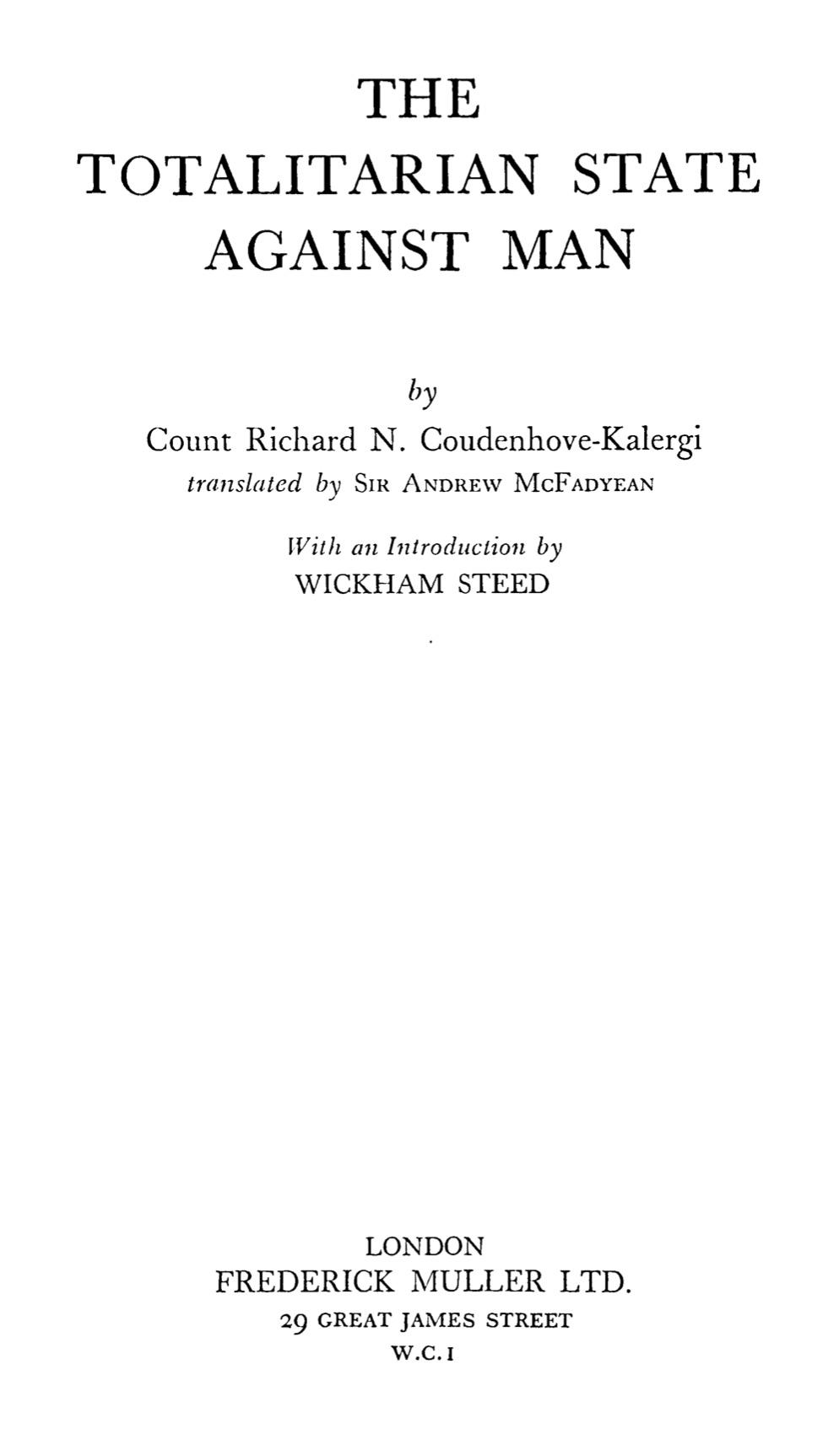 Hegel declared, “the ultimate end which has the highest right against the individual, whose highest duty is to be a member of the State ”. This doctrine Coudenhove-Kalergi shows to be the root of political evil.

Hegel was, indeed, the foster-parent of the Totalitarian State idea, and the parent of the modern reaction against freedom. To his influence can be traced the form of Russian Bolshevism as of Italian Fascism and of German Nazism. Mussolini’s dogma that “the State is an Absolute” is merely an echo of Hegel’s error. Some knowledge of the philosophical antecedents of this totalitarian heresy may, indeed, be needed before the full force of Coudenhove-Kalergi’s demolition of it can be appreciated. His doctrine runs:

This creature of man plays the part of an intermediary between God and man ; this artificial machine sets itself up as a natural organism; this servant of mankind parades itself as mankind’s master...

To these idolatries Coudenhove-Kalergi makes cogent reply. He affirms with truth that “the least of men is immeasurable and infinite, a true child of God”. Every man constitutes a world for himself, lives his own life, and dies his own death. Ten million human beings remain always ten million individuals, ten million separate worlds, even if they are living in the best of all States. For this reason, Coudenhove-Kalergi argues, the State as collective being, as super-man, as god, is an invention, a myth, a dangerous lie. The State, he declares, is an insurance company raised to the rank of an idol by its beneficiaries. “ We would fight against this idolatry, but not against the insurance company; not against the State, but against the deification of the State, the most fatal heresy of our age.”

BORN of a European father and a Japanese mother, I have been accustomed since my childhood to interest myself in questions which transcend all differences of civilisation and race and move men and humanity.

As the author of philosophical works I have always made it my object to seek out the primitive forms and forces which underlie life’s manifold phenomena.

As founder and leader of the movement which aims at a federation of the States of Europe I have had to grapple for a decade and a half with all the problems which are to-day uniting or dividing human beings.

I have thus had occasion to discuss fundamental questions of modern politics, culture, and economics with men of all peoples and all classes; with Europeans, Asiatics, and Americans; with kings and presidents, dictators and democratic statesmen; with leaders of industry and finance, workmen and peasants; with clerical, military, and academic dignitaries; with philosophers and artists, inventors and teachers, journalists and writers; with Liberals and Fascists, Conservatives and Communists.

This book is the distillation of such studies, ideas, and conversations. Its object is to introduce clarity into the confusion of demagogy and lying which to-day so obscures the grave problems of our time that even politicians can only with difficulty recognise the forces and ideas Which underlie the events and changes of our day.

Further, it attempts to indicate to all men of good will a way into a better and a clearer future out of the labyrinth of unsolved problems which vex our age.

This book is therefore intended for all men and peoples Who are seeking an answer to the riddle of our destiny.