Home Books The Russian Church Since The Revolution (1928) by G.P. Fedotoff

The Russian Church Since The Revolution (1928) by G.P. Fedotoff

The Russian Church Since The Revolution (1928) 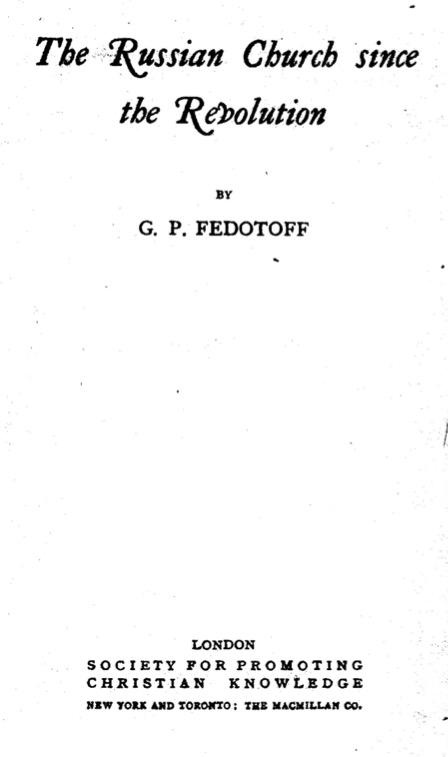 After a total suspension of news from Russia lasting between twenty-four and forty-eight hours, news reached England of the Revolution and the abdication of the Tsar. I remember going to my club and witnessing the enthusiasm of the members: Have you heard the glorious news from Russia?" My suggestion that it was a great disaster was received with pitying incredulity, and for months afterwards the censorship imposed upon the Press the obligation of "writing up" the Revolution.

Three months later, in a postcript to Birbeck and the Russian Church (S.P.C.K., 1917), I attempted to appraise the effect on the Church of the great change in its position. But neither I nor any other individual at that time could foresee the extent of the catastrophe or could believe that it presaged the most ferocious attack upon Christianity that the world has ever seen.

The surviving Bishops of Russia generally speak with quiet confidence of the future - they know their people, and the failure of the Bolsheviks, to tear Christianity out of their hearts is evident; the frontal attack on the Church has been largely abandoned.

The methods now followed are more sinister, if less direct. In the first place, all training of candidates for the ministry has been rendered impossible; what will happen when clergy and sacrament alike disappear?