The Role of Power in Nonviolent Struggle (1990) by Gene Sharp

The Role of Power in Nonviolent Struggle (1990) 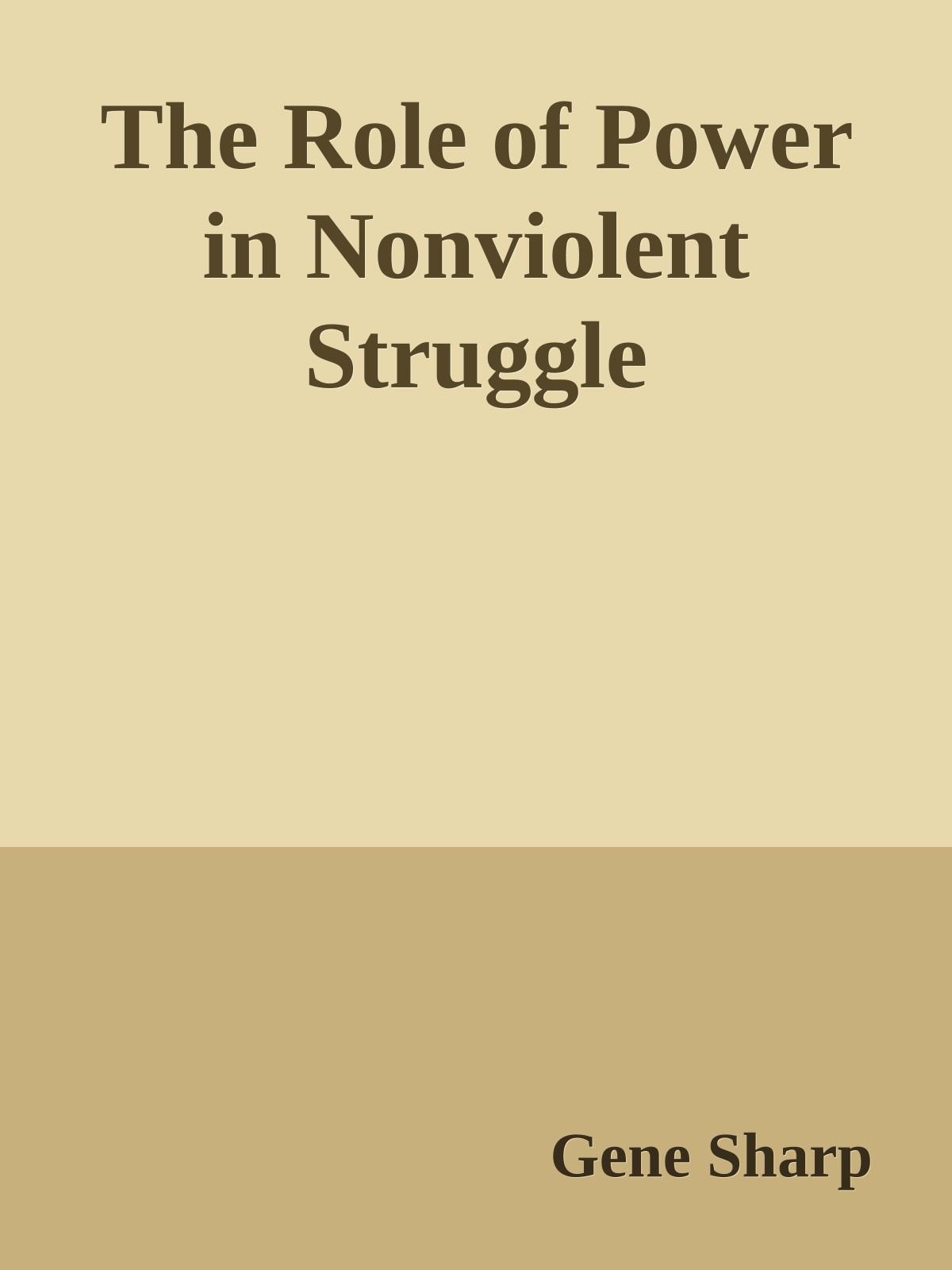 Nonviolent struggle is based upon the very nature of power in society and politics. The practice, dynamics, and consequences of nonviolent struggle are all directly dependent upon the wielding of power and its effects on the power of the opponent group. This technique cannot be understood without consideration of this important element in its nature.

Nonviolent struggle is a political technique that needs to be understood in its own right, not explained or assessed by an assumption of its close association or identity with quite different phenomena. This technique of action uses social, psychological, economic, and political methods of applying sanctions, that is, pressures or punishments, rather than violent methods? The technique includes nearly two hundred identified methods of symbolic protest, social non-cooperation, economic boycotts, labor strikes, political noncooperation, and nonviolent intervention (ranging from sit-ins to parallel government). These many methods are also called the "weapons" of nonviolent action.

The nonviolent technique is not to be confused with the important but separate phenomena of religious and ethical beliefs that espouse abstention from violence . Those beliefs may be shared by the same persons or movement using nonviolent action. However, far more frequently the practice of nonviolent struggle has been conducted by people and movements that lacked a principled commitment to non- violent means. They had previously used violence or would be will- ing to do so in the future in other circumstances. Under the current conditions, however, people were willing to follow a grand strategy of nonviolent struggle for a particular purpose. They were willing to use these nonviolent weapons in place of violence, and to maintain non- violent discipline, even though they were not committed to those means in other possible situations. The overwhelming reason for this choice of nonviolent means in conflicts has been that reliance on this type of struggle would increase the chances of their being successful in the current conflict.

The broad population that feels itself to be negatively affected by a policy or action of the opponent group may be called the "grievance group." This body may be concerned with limited issues, a broad policy, or may even repudiate the whole regime. The group actually participating in nonviolent struggle is smaller than the general grievance group, although the size of the population and the number and types of institutions that participate in the nonviolent struggle will vary widely.

Power is an integral part of nonviolent struggles. These conflicts cannot be understood or waged intelligently without attention to power capacities and power relationships. "Power" is used here to mean the totality of all influences and pressures, including sanctions, available to a group or society for use in maintaining itself, implementing its policies, and conducting internal and external conflicts.

Power may be measured by relative ability to control a situation, people, and institutions, or to mobilize people and institutions for some activity. Such power may be used to enable a group to achieve a goal; to implement or change policies; to induce others to behave as the wielders of power wish; to oppose or to maintain the established system, policies, and relationships; to alter, destroy, or replace the prior power distribution or institutions; or to accomplish a combination of these.

Political power may be possessed by governments, the State, institutions, opposition movements, and other groups. Such power may be directly applied, or may be a reserve capacity, having influence merely by its existence. For example, power is present in negotiations as well as in war.

In order to understand the role of power in nonviolent struggles it is necessary to look at the nature and dynamics of the power available both to the opponent group and to the nonviolent group.