Home Books The Revolution Was (1944) by Garet Garrett

The Revolution Was (1944) by Garet Garrett 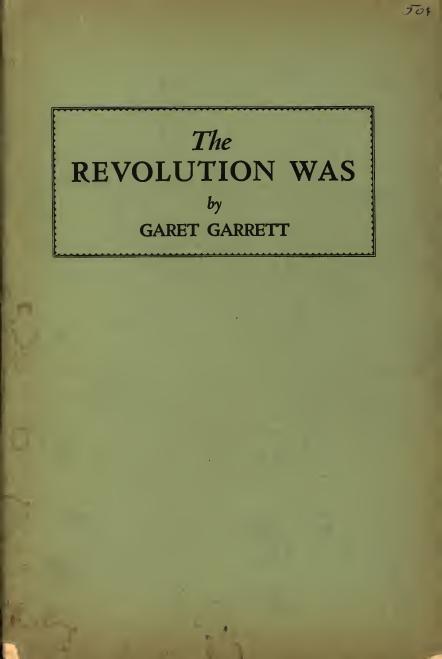 Explains how Roosevelt's New Deal and The Great Depression was used to enact a "silent revolution" in the USA which went by unnoticed.

"There is no comfort in history for those who put their faith in forms; who think there is safeguard in words inscribed on parchment, preserved in a glass case, reproduced in facsimile and hauled to and fro on a Freedom Train.

"We have crossed the boundary that lies between Republic and Empire."

"Garrett's three trenchant brochures are indispensable to anybody who wishes to understand 'the strange death of liberal America' and desires to do something to check these dolorous and fateful trends in our political and economic life."

"His keen perception and his forceful direct language are unsurpassed by any author."
— PROFESSOR LUDWIG VON MlSES, economist, 1952

"This triad is must material for those who would be informed of the past, aware of the present, and concerned about the future."
— STATE SENATOR JACK B. TENNEY, California, 1952

"The most radical view of the New Deal was that of libertarian essayist and novelist Garet Garrett..."
— Professor Murray Rothbard, economist and
historian, 1992.

"Today, 60 years after Garet Garrett's perceptive and prescient writings, we can easily agree with his diagnosis of our national malady. It is internationalism. By reading him today we can more fully understand not only how we went wrong but perhaps gain clues how we may extricate ourselves.""

— WA CARTO, founder of the Institute for Historical Review.

Garet Garrett was born in 1878 in Pana, Illinois. An accomplished journalist and financial expert by his thirties, he was a member of the editorial board of the New York Times, executive editor of the New York Tribune, and chief editorial writer for the Saturday Evening Post. Before publishing Burden of Empire (as The People's Pottage, in 1952), Garrett wrote several successful novels on business and financial themes, and a history of the 1929 crash (A Bubble That Broke the World, 1932); a biography of Henry Ford (The Wild Wheel, 1954); and a history of the American republic up to and including its demise (The American Story). He died on his farm in Tuckahoe, New Jersey in 1954.