The Plot Against South Africa (1989) by Klaus D. Vaque 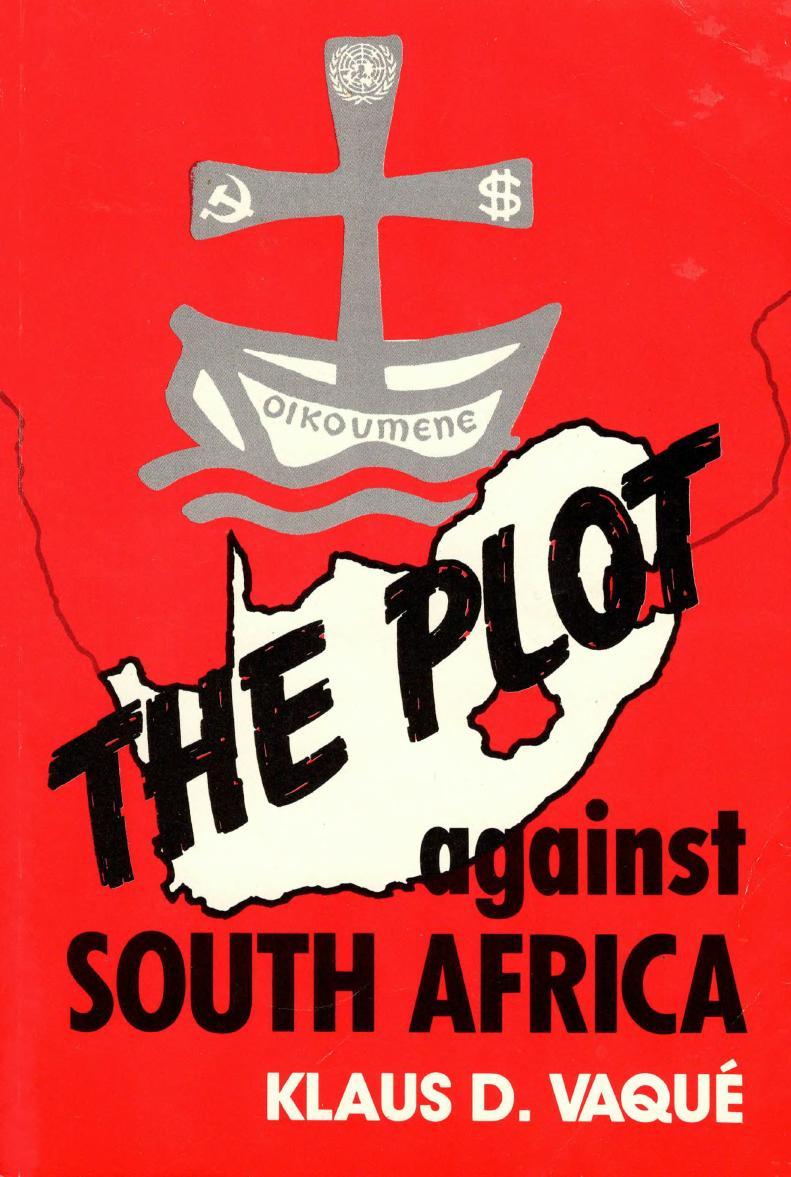 At some time or other most of us will have tried to put a jigsaw puzzle together; baffling little pieces that in the end form a clear coherent picture of a landscape or what not. The hardest thing about it is the beginning. The more pieces that get put in place, the clearer and more comprehensible the whole picture becomes. Many people never get past the beginning and in frustration give up trying to work it out.

It is rather like that with most of us in our attempts to make something of political events in the world. We can see only the separate bits, which often make no sense. And we are astounded at what seems to us the ignorance of many politicians displayed by their attitudes and responses to certain things, so that in our amazement we are compelled to wonder how such fellows could ever have reached high office.

To many South Africans, for example, it is inexplicable that their country should now be threatened with worldwide sanctions, where the apartheid policy of "separate development", ostensibly the greatest evil of this country, has in fact for years been undergoing demolition at an increasingly rapid rate. They cannot understand why an international world press, and consequently so-called world opinion, should damn them root and branch, while they have demonstrably achieved the highest standard of living for their black compatriots in all Africa, built schools and universities for them and given them the best medical care available.

Nor can they understand why the governments of Great Britain and America helped the marxist dictator Mugabe into power in neighbouring Rhodesia, now Zimbabwe, in very fishy circumstances and by manipulated elections, after simply rejecting the moderate black Bishop Muzorewa who had already been democratically elected. And now Mugabe is waging a genocidal war against the Matabele people, which so far, according to trustworthy estimates', has caused the loss of fourteen thousand lives. Yet Mugabe continues to receive support, while South Africa is constantly accused of all manner of violations of human rights.

Many South Africans find it an impenetrable mystery that "friendly" Western governments, such as Great Britain, should send military officers to train former FRELIMO terrorists in Mozambique next door to enable the communist government there to cling to the reins of power.

They really cannot understand why the big international banks should refuse any further credits to South Africa, the soundest and most reliable payer in Africa, and demand immediate repayment of all outstanding credits; which has had the inevitable effect of plunging the country into its deepest depression since the thirties; while at the same time granting thousands of millions to communist states and banana republics in South America and black Africa without the faintest prospect of ever being repaid.

It is completely incomprehensible to them that the World Council of Churches in Geneva should stab in the back what many missionaries regard as the most Christian nation in the world, while giving moral aid and comfort and financial support to marxist-controlled "liberation movements" through the device of their Programme to Combat Racism, which is then used to wage a terror war against the god-fearing Boers.

Taken separately, all these and many more are the little pieces of a worldwide political jigsaw puzzle that many find baffling and few can make out as a coherent whole; for they are only fragments of a world- revolutionary drama, which unknown to the ordinary peoples of the world towards the end of this our century is heading at an ever accelerating speed for its undeclared goal. This confusion and apparent incoherence of events, however, is not accidental; it is managed by powerful forces behind the scenes. As Benjamin Disraeli (1804-1881), a former Prime Minister of Britain, put it:

"The world is ruled by persons who are quite different from what those who cannot see behind the scenes think."

Solzhenitsyn calls them "the powers of evil" which have now gone over to the final attack. Particularly since the beginning of this amazing century they have by craft and stealth plunged mankind into a succession of wars and bloodshed unprecedented in all human history. In the course of the years, as the jigsaw puzzle gradually took shape, it became clearer and clearer to me that there was a huge design being put into effect behind the scenes of the world stage, whose purpose is to change that world completely, with all its old established orders. It is a conspiracy with the objective of exploiting and enslaving all mankind and achieving atheistic totalitarian domination of the world; in fact, of establishing a world government, to which all the peoples of the earth shall be forced to submit.

Since of course the nations of the earth would never willingly submit to such a plan, an enemy-image, an "East-West confrontation", had to be created. It is perfectly obvious that the instrument of the conquest and subjection of the nations is imperialistic soviet communism, which the conspirators themselves created with their instigation of the October Revolution in 1917 and have ever since kept in being with enormous credits, shipments of grain and the technical and military know-how of the West.

South Africa is merely a new pawn in this cynical game of chess, which is now being put through the revolutionary wringer so that another and particularly important obstacle may be got out of the way to the New World Order, as they call it. The concentrated attack on South Africa now taking  place everywhere is, therefore, as we shall see in later chapters, not just a matter of getting rid of apartheid, more human rights or votes for the black citizens of South Africa (however desirable that might be) but plainly and simply to install a socialistic-marxist black regime which would be firmly anchored in the camp of the One-Worlders, that band of internationalist conspirators. We shall hear more about them too.

It is in the very nature of the case that a conspiracy should work away secretly and covertly; nevertheless it is inevitable that now and again, here and there, some incident should give the game away and allow the alert observer to get a glimpse through the thing, and with further study to discern the total design.

The principal evidence of the existence of a deliberate conspiracy to destroy the anti-communist and pro-Western countries is to be found in the continuity and similarity of events in different countries, where "revolutions" and subversions have all followed an identical pattern. We need think only of Cuba,Vietnam,Iran, Nicaragua, Cambodia, Rhodesia, Mozambique, Angola, the Philippines and others. We shall say more about these later.

And it is hardly conceivable that the similarities of these events could be purely accidental, when the same factors and the same external influences operated decisively.

As Franklin Roosevelt (who undoubtedly knew what he was talking about) said:"Nothing happens by accident in world politics. Everything is well prepared, carefully planned and deliberate."

South Africa, and with it the rest of the free world, is confronted with an enemy who exerts perilous influences and powerful blackmailing pressures on all the governments of the world with diabolical cunning and deception through manipulation of the mass media that he controls, and with almost unlimited financial resources at his disposal. By these means governments can be induced to pass measures and carry out "reforms" that often entail their own destruction, as we have seen from other examples.

After reading this book, those who have hitherto identified the arch- enemy of human civilization and liberty exclusively in Soviet communism will look to the West rather than to the East for the enemy, to New York rather than to Moscow; for it is there that the centres of power and the faceless conspirators are to be found.

When I - in spite of all of the imperfections and shortcomings of South Africa - in the first part of this book stress the more positive aspects and achievements of this great country and its white Afrikaner people, then it is done deliberately for the following reasons:

First, because I consider it urgent and necessary to present a more  balanced and realistic picture of South Africa than is being held up to the reader in other countries; even at the risk of being accused of onesidedness. I also believe that the ordinary man has been so overstuffed with negative reporting about this country that for the sake of simple fairness it is high time to show the other side as well. After all, there are two sides to every coin.

Secondly, I would like to point out the absurdity that the world-wide attack against South Africa should be aimed at "racism" or "improvement of human rights" when this country has achieved by far the greatest accomplishments in Africa on all sectors of living standards, schooling, medical care and other civilizing amenities for its black citizens, as we shall see in later chapters.

The self-appointed apostles of morality should logically begin by accusing Uganda, Ethiopia, Angola, Zimbabwe and most other African states - not to speak of the communist countries - where conditions prevail that are not even remotely comparable to those in South Africa.

And thirdly, I wish to warn over-trustful South Africans of all races not to be under any illusions about what is really happening. Their fate, and perhaps that of the rest of the free world, is at stake. Their course of action in the years ahead and their firm resolve to stand up to the fraudulent powers of darkness will determine whether this outpost of civilization in Africa shall become yet another victim of the internationalist conspiracy or not.

I pray to God that the peoples and the politicians of South Africa may be imbued with the wisdom to recognize the real enemy behind the mask of communism. Only if they can see through this greatest political intrigue of our century will they be able to make an effective stand against the enemy. If this book can provide a modest contribution to that end it will have fulfilled its purpose.