A highly-critical first-hand exploration of how the mainstream news media industry operates. 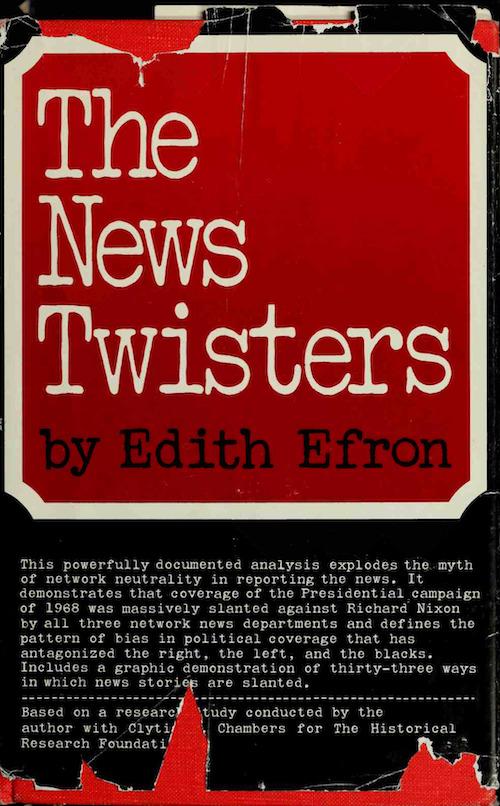 Text from the book cover and inside-jacket

This powerfully documented analysis explodes the myth of network neutrality in reporting the news. It
demonstrates that coverage of the Presidential campaign of 1968 was massively slanted against Richard Nixon by all three network news departments and defines the pattern of bias in political coverage that has antagonized the right, the left, and the blacks. Includes a graphic demonstration of thirty-three ways in which news stories are slanted.

THE NEWS TWISTERS, as its distinguished read- ers say on the back cover of this book, is a "bomb- shell" and a "blockbuster." Its initials—TNT—are not a coincidence. A powerfully documented expose of bias in network news, it explodes the myth of network fairness and reduces the networks' claim of political neutrality to rubble.

TNT, written by Edith Efron, a nationally known analyst of network news patterns, asks the primal question about the bias crisis: Why have charges of bias come from every polar group in the U.S. spectrum—save from a fragment of the white liberal world?

TNT goes, for its answers, not to social theorists but to network transcripts. Based on an original meth- od of analyzing news stories for bias, and a two- year study of prime-time network coverage of the 1968 Presidential campaign and its major issues, TNT reveals that the wide-spectrum political antagonism to the networks was inevitable.

TNT slashes through the conventional political line- ups on the network bias issue—uniting all of them in one scholarly yet suspenseful analysis. It con- firms Republican charges of a calculated assault on Richard Nixon. It confirms the multiparty "Silent Majority" charges of left-liberal bias. It confirms black-minority charges of insidious racism. And it confirms New Left charges of distortion and "censorship."

TNT demolishes the networks' claim that these charges from mutually hostile groups contradict each other and emerge from "selective perception." TNT demonstrates that all these bias charges are consistent, and that they are a direct response to the biased selectivity of the newsmen.