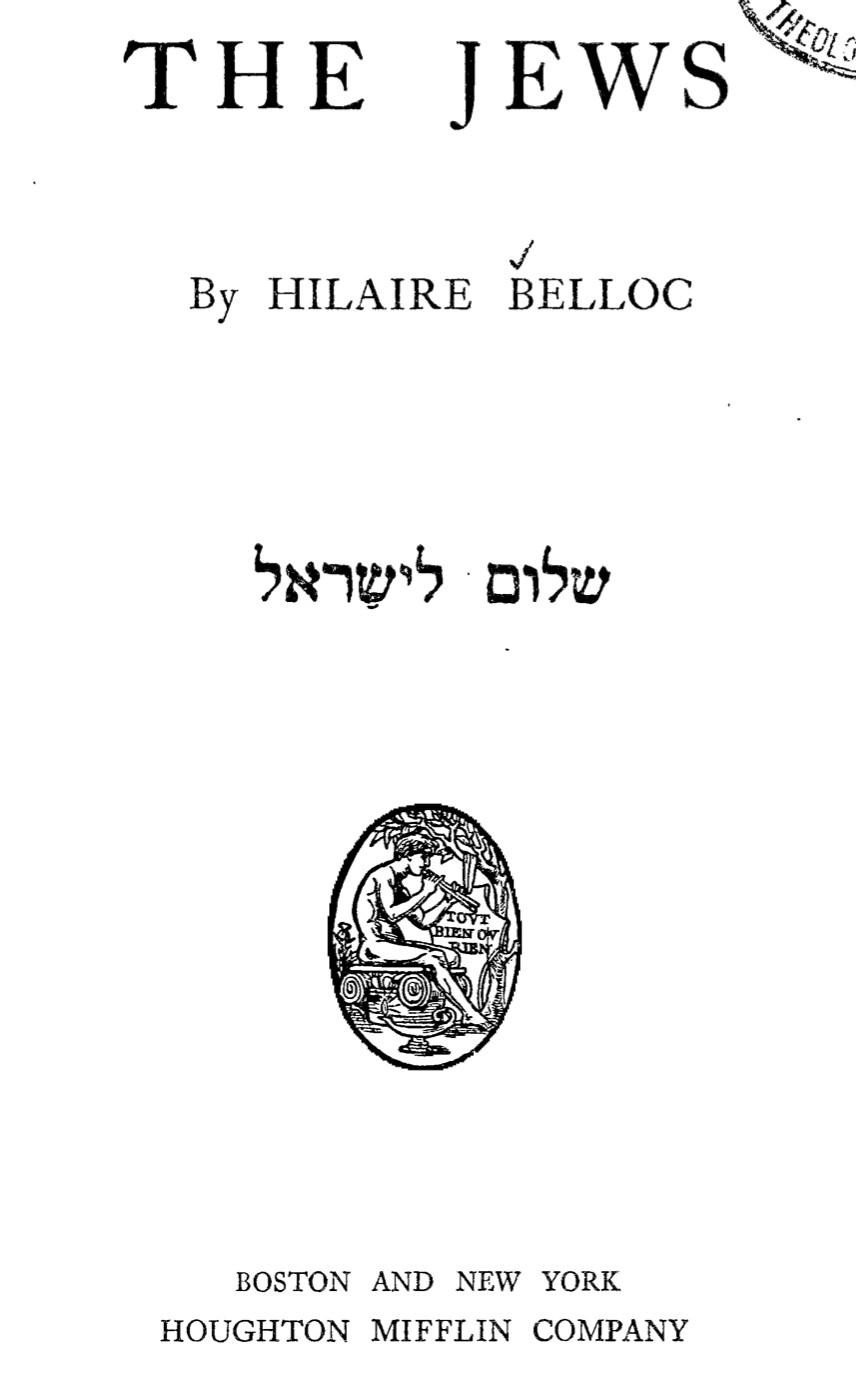 The object of this book is more modest, I fear, than that of much which has appeared upon that vital political matter, the relation between the Jews and the nations around them.

It does not propose any detailed, still less, any positive legal solution to what has become a press¬ ing problem, nor does it pretend to any complete solution of it. It is no more than a suggestion that any attempt to solve this problem ought to follow certain general lines which are essentially different from those attempted in Western Europe during the time immediately preceding our own. I suggest that, if the present generation in both parties to the discussion, the Jews and ourselves, will drop convention and make a principle of discussing the problem in terms of reality, we shall automatically approach a right solution.

We have but to tell the truth in the place of the falsehoods of the last generation. Therefore, of the three principles upon which this essay reposes, the principle that concealment must come to an end seems to me more important than the principle of mutual recognition, or even the principle of mutual respect. For it may well be that my judgment is at fault in the matter of Jewish national conscious¬ ness ; it may well be that I exaggerate it, and it is certain that one party to a debate cannot be possessed of the full knowledge required for its settlement; the other side must be heard. But neither my judgment nor the judgment of any man can be at fault on the value of truth and the ultimate evil consequences of trying to build upon a lie.

The English reader (less, I think, the American) will often find in my sentences a note that will seem to him fantastic. The quarrel is already acute here in London, but it has not here approached the limits which it has reached long ago elsewhere; and a man accustomed to the quieter air in which all public affairs have, until recently, been debated in this country, may smile at what will seem to him odd and exaggerated fears. To this I would reply that the book has been written not only in the light of English, but of a general, experience. I will bargain that were it put into the hands of a jury chosen from the various nationalities of Europe and the United States it would be found too moderate in its estimate of the peril it postulates. I would further ask the reader, who may not have appreciated how rapidly the peril approaches, to consider the distance traversed in the last few years. It is not very long since a mere discussion of the Jewish question in England was impossible. It is but a few years since the mere admission of it appeared abnormal. The truth is that this ques¬ tion is not one which we open or close at will in any European nation. It is imposed successively upon one nation after another by the force of things. It is this force of things, this necessity for national well-being, and for the warding off of disorder, which has thrust the Jewish question to-day upon a society still reluctant to consider it and still hoping it may return to its old neglect. It cannot so return.

I will conclude by asking my Jewish, as well as my non-Jewish, readers to observe that I have left out every personal allusion and every element of mere recrimination. I have carefully avoided the mention of particular examples in public life of the friction between the Jews and ourselves and even examples drawn from past history. With these I could often have strengthened my argument, and I would certainly have made my book a great deal more readable. I have left out everything of the kind because, though one can always rouse interest in this way, it excites enmity between the opposing parties. Since my object is to reduce that enmity, which has already become dangerous, I should be insincere indeed if from mere purpose of enlivening this essay I had stooped to exasperate feeling.