The Jewish Question and the Key to Its Solution (1908) 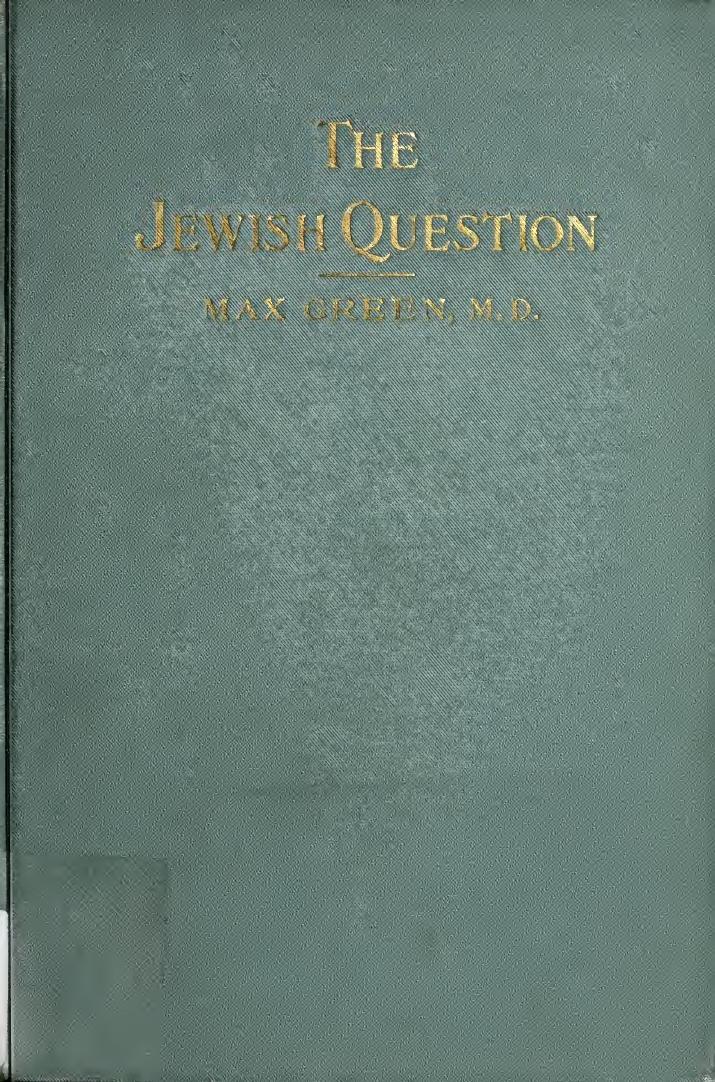 PREFACE TO THE SECOND EDITION

That a second edition of this work is called for within six months of its first issue, is a matter of deep gratification to the writer. The kind and warm appreciation with which the volume has been received both here and abroad, encourages him in the hope that his humble effort may contribute to a speedy solution of the great problem of his people. The writer has used the opportunity to thoroughly revise the book and improve it in many ways. To make the work accessible to the millions of his Yiddish speaking brethren on both sides of the Atlantic, a Yiddish and Hebrew version has since been prepared, which is now being published. Philadelphia,

The writer of this volume is a physician; he is neither a professional writer, nor a theologian. However, years of study and contemplation of his people's problem, entitle him, he believes, to respectfully present his views before his people. Although not fortunate enough to be among the leaders of the great movements now going on in the midst of Jewry, he has had the opportunity of observing them all from the vantage-ground of objectivity, and so is perhaps, more able to consider them with impartiality. As a physician, moreover, accustomed to the daily work of diagnosis and treatment, he may have been able to approach his people's case with the modern scientific methods applied in the treatment of bodily ailments.

Among the Jewish physicians, in this country, the writer, we believe, is the second one to offer a volume on the Jewish question. While we agree with our distinguished New York colleague* on many points in the diagnosis of the case, we cannot help being at variance with him as regards the treatment. Dr. Fishberg sees the remedy in gradual assimilation, in the gradual loss of the Jew among the nations. But assimilation is certainly not the burden of our message. To look to assimilation as a remedy is to fail to appreciate the many and repeated lessons in the long history of our people. It means also to have lost the value of the Jew's highest possessions.

The national reawakening of the Jew, the great movement Zionward, the revival of the Hebrew tongue, and the appearance on the scene of the new Jew, who although Socialistic in his tendencies, is so unlike the assimilating Socialist of yesterday, all these the writer cherishes as precious facts. He sees in it the coming of the great Jew of tomorrow, who, speaking the language of Moses and Isaiah, will again become imbued with the spirit of our own, and real, Prophets. The young Jew cultivating the Hebrew tongue must go for his models of style to the Prophets and Psalmists, and, sooner or later, he is bound to discover that the so-called prophets^ of today have added, and can add, nothing to the justice and righteousness which those of old have proclaimed.

The writer is painfully conscious of the present unpopularity of his standpoint. It is certainly always more pleasant to stand on the popular side. He feels, however, that no unkind criticism can come from those who will approach his representation of the problem with earnest and unprejudiced minds. To them the motto of our ancient sages is not unknown: "Accept the truth from whomsoever gives it."

The book is intended, of course, for the people whose problem it considers. We trust, however, that it may also prove of some value to Christian readers. Is not a Christian, if true to his religious profession, also an Israelite ? Child by faith of the first Hebrew, Abraham, he needs must be a Hebrew in spirit. As such, the problem of his brothers of the ancient stock of Abraham cannot but be of the highest interest to him.

Those familiar with the works of Edersheim will know the writer's indebtedness to him. Although our points of view differ somewhat, we should never have been able to get through the labyrinth of Rabbinical literature without the guidance of that great scholar. The quotations, however, as the Appendix will show, are all taken at first hand, and, with the exception of two or three passages, have all been carefully copied from the original works. The same may also be said of the English renderings, all of which have been written with the original in hand.
We also must express our obligation to that treasure-house of Jewish lore, the Jewish Encyclopedia.

In the Biblical texts, the Revised Version was used as standard, but it was found necessary in some cases, for the sake of clearness, or in conformity with the object in view, to deviate somewhat from that version. In every case, however, careful comparison was made with the original. A few texts have only been paraphrased. These will be recognized by the absence of quotation marks.

In conclusion, the writer wishes to express his heartfelt thanks to the dear friends, without whose aid and encouragement this volume would never have been written or published.