The Jew and Human Sacrifice - Human Blood and Jewish Ritual, an Historical and Sociological Inquiry (1909) by Hermann Leberecht Strack

The Jew and Human Sacrifice : Human Blood and Jewish Ritual, an Historical and Sociological Inquiry (1909) 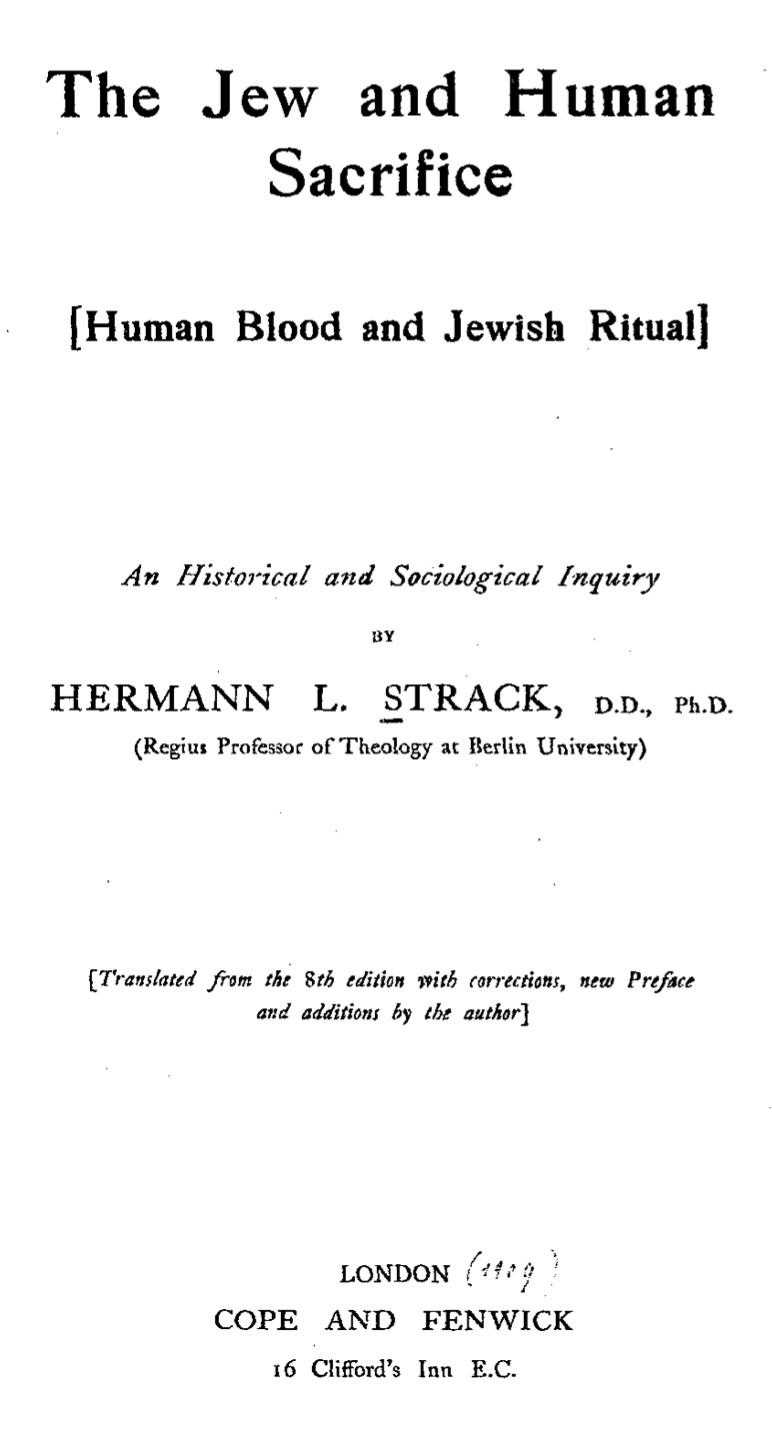 EVERY year, especially about Easter-time, there is a revival of the accusation that the Jews, or, if not all the Jews, certain Jews, make use of the blood of ChriStians for purposes of ritual. The charge is bound to be often repeated, so long as the replies to it are limited to the contradiction and exposure of the falsity of the reasons brought forward...... That is why I discuss the accusation in connection with the significance of blood as regards religious belief, and particularly as regards the superstitious of humanity at large.

I expressed my opinion on the question, whether the Jews use Christian blood for ritual purposes, as far back as 1882, the year of the Tisza-Eszlar trial, (12th August, No. 32). Further investigations (apropos of the Bernstein case, v.p. 144 sq.) convinced me more than two years ago, that, whilst I was correct in my negative answer to the charge, it was possible, and even necessary, to base it upon a deeper foundation. I am now compelled to publish the results of my fresh researches by the renewal of the controversy about ritual murder in consequence of the assassination of an eight year old girl in Corfu during the night of the 12th to 13th April this year (v.p. 213 sq.) ... I have made it my special business to let the facts speak for themselves, and have ...... almost confined myself to quoting, without alteration, the actual statements in the sources of information I have utilised : so anybody who wishes can arrive at an unbiassed judgment for himself.

The facts I have had to bring forward are, for the greater part, of a very loathsome kind. But, in order to cure the terrible disease of superstition, we must Erst of all know the disease.. ', . My exhortation to our Christian priesthood, to our whole Christian people is: Up and gird yourself for battle, not only against unbelief, but also against superstition! When German Christendom, free from superstition, stands firm in true belief in the crucified Saviour, risen from the dead, the question, so far as concerns Germany, whether Christian blood is ritually employed by Jews, will be exploded and futile, for more reasons than one.