The Cause of World Unrest (1920) by Howell Arthur Gwynne 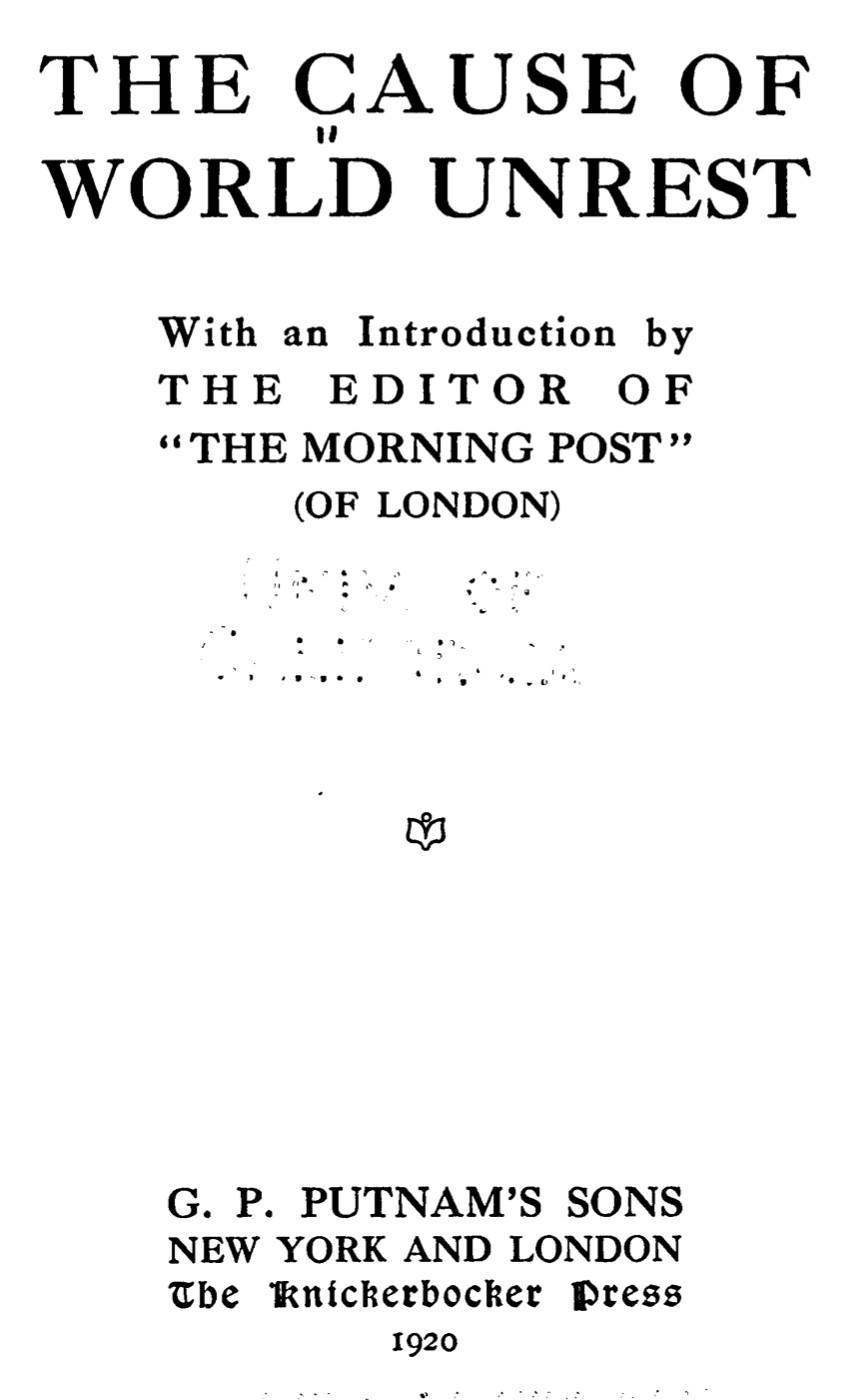 PREFACE TO THE AMERICAN EDITION

The difficulty in arriving at an accurate understanding of the problem of the Jews lies in the fact that there is a distinct Jewish religion and a distinct Jewish race. Where one ends and the other begins, or whether both mean one and the same thing, are subjects which are discussed in the following pages. We Gentiles, especially those of us who are of Anglo-Saxon origin, exact and yield the utmost tolerance in matters of religion. We have accepted the theory of citizenship which pays no regard to a man's religion but only asks of him, in return for the rights of his citizenship, a proper sense of its duties. Both in America and in the British Empire, we accord naturalization with freedom and we do not question the patriotism of the naturalized but take this for granted. Yet in moments of national gravity, when the State is in danger, especially from a foreign foe, we are inclined to watch with some degree of natural suspicion those in our midst who are of enemy origin.

There have been innumerable occasions when the loyalty of a new citizen to his new State has been admirable: on the. other hand, both here and in America, we have found that race instincts have been stronger than oaths of allegiance.

But in the case of the Jews, we find a people which has preserved both its religious and its racial ideals intact through many generations of cruel persecution. A race which has persisted in spite of such terrific pressure, constantly applied and often without mercy or justice, must be acknowledged to be a great and virile nationality in the mere fact of its persistence. But when we consider that this race has not merely persisted, but has achieved enormous power and influence in every civilized country, our admiration is easily aroused. Yet there is another side to the picture. How are you to regard these strangers in your midst? Are they Americans, Jewish Americans, or American Jews? The answer to this question is the solution of the Jewish problem.

Jews will, however, reply with assurance that they are not a race but a religion and that to differentiate between them and other religious bodies is sheer prejudice and bald Anti-Semitism. In some cases this claim is justified. There are in England Jewish families which have lived here for centuries and their devotion to their country is beyond question. It is necessary to distinguish, therefore, between those Jews who have definitely adopted a single nationality and those to whom the Jewish nationality is the only one that counts. How is one to distinguish? There again lies another great problem in this greater problem of Jewry in the world. Roughly speaking, the only way to mark out a line which would separate the good Jewish citizen from the bad Jewish citizen is to apply the political test. As a rule, though it is not without exceptions, a Jew who is politically active in a country is also racially active. But there are, of course, many Jews who are indifferent to the politics of the country in which they live and yet are ardent Jewish nationalists. In a word, be- cause the Jews can and do possess a dual nationality, they must remain suspect from the point of view of the man who acknowledges exclusive allegiance to a single country. This suspicion, which seems to me to be natural and by no means exaggerated, goes by the name of Anti- Semitism.

Are the great mass of Jews working towards a definite goal or are they mere ordinary citizens against whom envy, suspicion, and long-dated religious animosity have provoked an unfair prejudice? The answer to this question will be found in this book. Lately there has been published both in America and England a translation of a work entitled "The Protocols of the Elders ofZion." It is difficult to say whether or not it is a genuine document.

I am quite sure that, if it had been published in these countries ten years ago, it would have been received with incredulity and, perhaps, contempt. But today, after our experience of the War, the Peace Conference, and the doings of the Jews in Russia, it has received everywhere a great deal of earnest study and consideration. Many of its prophecies are being fulfilled before our eyes and, because of this, we are justified in giving to it a greater credence than could have been possible ten years ago. Jewish writers and newspapers have denied with indignation the authenticity of the protocols. But even if indisputable proof were adduced tomorrow that they are a forgery, there would still be asked the same question which the protocols have provoked and are provoking every day. Have the Jew a foreign policy of their own with a definite end in view?

It would be difficult to deny to that section of Jewry which is best described as political, a definite national policy. There is nothing inherently wrong or improper in this. All that we Gentiles ask is that acknowledgment should be made that such is the case. When that is made clear, we can then judge whether or not such policy is to our advantage and we can act accordingly. Yet many Jews attempt to deny that they have any political ambitions apart from the interests of the country in which they live. This denial can carry no weight, as the reader will acknowledge after reading these pages. And it becomes incumbent upon us therefore to study the nature and scope of this Jewish policy in order to see how far it is compatible with our own national policies. This book is an attempt to give an outline of the political aims and objectives of political Jewry. But a word of warning is necessary. Political Jewry does not comprise all Jewry. There are many Jewish citizens both in America and here who differ from the rest of us only in their religion. A blind Anti-Semitism directed against all Jews is both bad policy and an act of injustice to Jewry.

But while we must be just, we must also be firm in our determination not to allow a duality of national policy in one and the same citizen.