Home Books The Case for Germany: A Study of Modern Germany (1939) by Arthur Pillans Laurie

The Case for Germany: A Study of Modern Germany (1939) by Arthur Pillans Laurie

The Case for Germany: A Study of Modern Germany (1939) 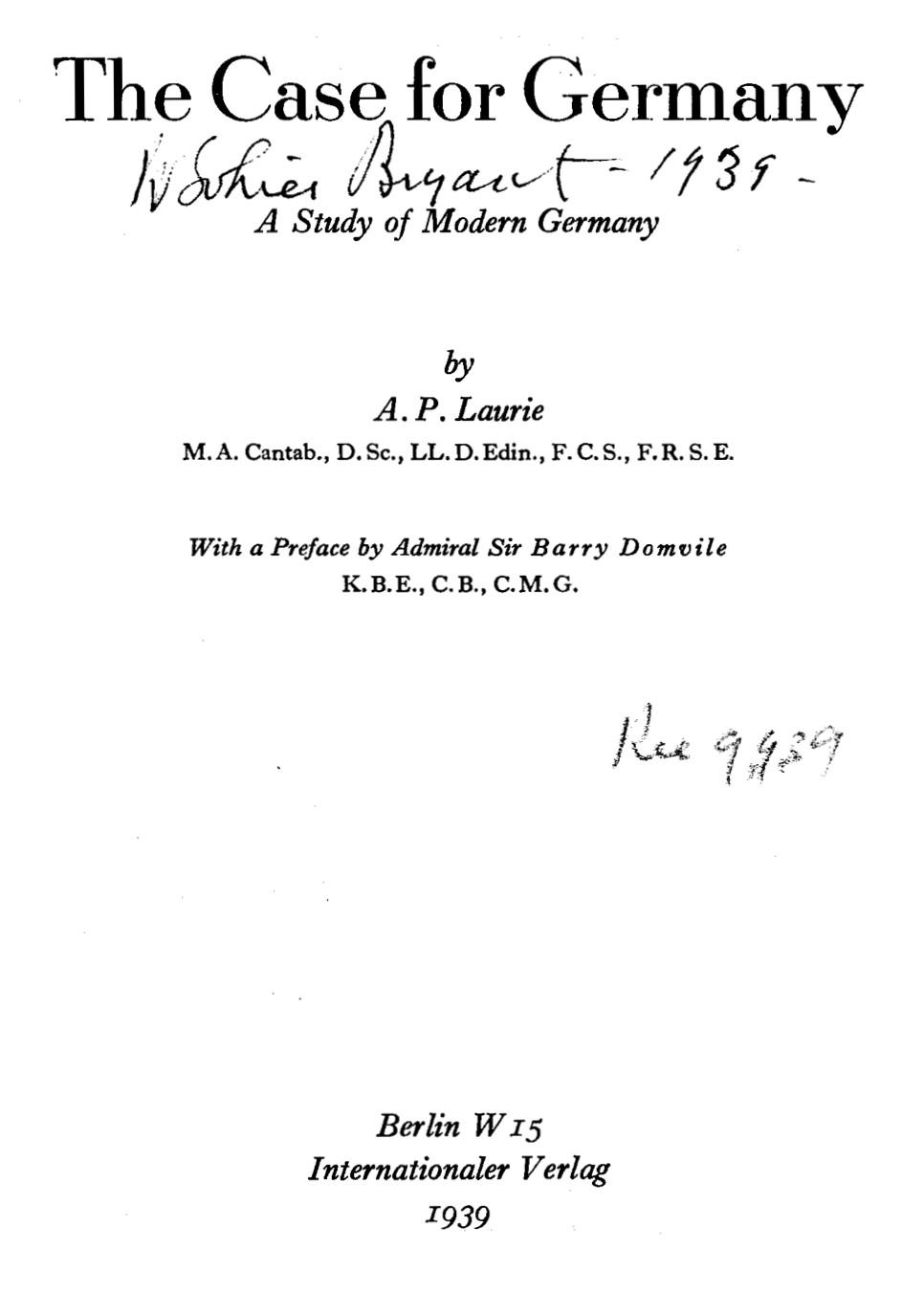 It is with admiration and gratitude for the great work he has done for the German people that I dedicate this book to the Fiihrer.

There are two sides to every question. You have read one side in our Press for six years. This book gives the other side.

It is a great pleasure to me to introduce the public to Dr. Laurie's valuable book on modern Germany. He is best known to the world as a brilliant scientist, but he has found time in the intervals of his work to pursue with ardour the task upon which every sensible member of the British and German races should be engaged-namely the establishment of good relations
and a better understanding between these two great nations.

Dr Laurie knows full well that this friendship is the keystone to peace in Europe-nay, in the whole world.

He is one of the small group who founded the Association known as "The Link", whose sole aim is to get Britons and Germans to know and understand one another better. He is one of the most zealous workers in this good cause in the country.

He writes of the National Socialist movement with knowledge and great sympathy.

The particular value of this book lies in the fact that it is written by a foreigner, who cannot be accused of patriotic excess in his interpretation of the great work done by Herr Hitler and his associates. I recommend this volume with confidence to all people who are genuinely impressed with the desire to under- stand one of the greatest-and most bloodless-revolutions in history.

"As we advance in our social knowledge, we shall endeavour to make our governments paternal as well as judicial; that is, to establish such laws and authorities as may at once direct us in our occupations, protect us against our follies, and visit us in our distresses; a government which shall repress dishonesty, as now it punishes theft; which s I show how the discipline of the masses may be brought to aid the toils of peace, as the discipline of the masses has hitherto knit the sinews of battle ; a government which shall have its soldiers of the ploughshare as well as its soldiers of the sword, and which shall distribute more proudly its golden crosses of industry-golden as the glow of the harvest
-than it now grants its bronze crosses of honour-bronzed with the crimson of blood."

"All front fighters fought side by side and went through an inferno. They are all comparable to the heroes of the ancient world. It was the manhood of the nations in their prime who fought and experienced the horrors of modern war.

In another war the flower of the nations' men and women will have to might. Europe will be destroyed if the best in all of the nations are wiped out. A new conflict will exceed even the ghastly tragedies of the Great War.

I believe that those who rattle the sables have not participated in war. I know that war veterans speak and think differently.

They energetically desire to prevent another convict. I hope that the men who are standing before me can contribute to preserve the peace of the world-a peace of honour and equality for all.

Let us not talk of prestige as between the victors and the defeated. This is my one request: Forget what has divided the nations before and remember that history has advanced."