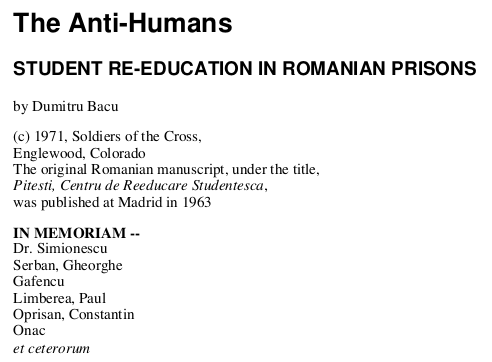 The author of this book, a Romanian born in Greek territory, went to Romania for his university education and there became a member of the anti-Communist organization that flourished in that nation before and during the tragic and fratricidal Second World War. After the Bolshevik conquest of Romania, the Soviets, undoubtedly on orders from their masters, maintained a pretence that their occupation was merely temporary and further disguised their purposes by keeping on the throne as King of Romania the legitimate heir, a young man who was merely a puppet in their hands, but served to give to the people an illusive hope that Romania, though devastated and impoverished, might again become a free nation. In this hope, of course, the Romanians (like many other captive peoples) were encouraged by the governments of the Western nations that had won the military victory. Those governments, especially in the United States, maintained a pretence that they were not the servants of the Bolsheviks' masters, and, whenever they deemed it expedient to administer a little verbal paregoric to their own population, manufactured oratory about "defending the Free World" and "containing Communism. " Americans, who were so charmed by those phrases that they did not notice what their own government was doing, cannot blame the Romanians (or the others) for having supposed that the official verbiage was an indication of national policy.

During the early years of Soviet occupation, therefore, the Romanian people entertained delusive hopes of eventual liberation, and the author of this book accordingly remained in Romania, his true fatherland. When he was at last arrested and imprisoned on suspicion of holding opinions inimical to Bolshevism, he, luckily, suffered only the excruciating tortures and hardships that are normal in what is called a Great Society. During his imprisonment, however, he had by chance an opportunity to learn of an experiment conducted on a select group of young men, and he had the acumen and patience to discover precisely what that experiment was. In this book he discloses for the first time the facts about a practice of which the peoples of the West still know nothing.

Bacu speaks only of what he knows -- of what he witnessed with his own eyes and learned from the lips of men who had, despite themselves, been stripped of their humanity by an infallible scientific technique. His subject, therefore, is what the Bolsheviks secretly did to human beings in the prison at Pitesti from 1949, when the experiment began, to 1951, when it seems to have been temporarily discontinued for some reason unknown.

What is described in these pages is not, however, an isolated event. Everyone who has had experience in military intelligence dealing with the Bolsheviks, or who has made a close study of information that is available from little known but authentic sources, will recognize in Bacu's pages a detailed description of a technique that
the implacable enemies of mankind have used in many lands -- perhaps in all countries that are officially Communist -- for many years.