The Surrender of an Empire (1931) by Nesta Helen Webster 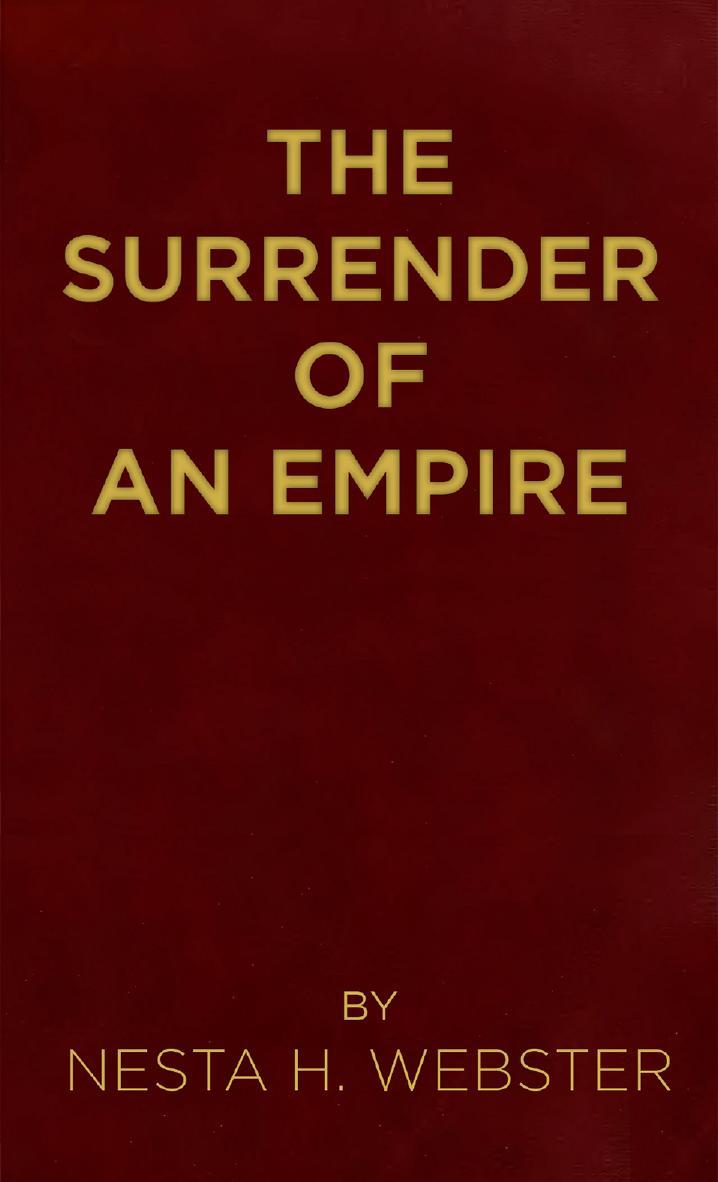 IN the study of every war there are two aspects to be considered the nature and force of the attack and the organisation of the defence.

Great Britain has now been at war continuously for sixteen years, at first with Pan-Germanism and later with the world force we now know as Bolshevism. The successive books I have devoted to the study of revolutionary movements have dealt solely with the attacking forces, with the doctrines, aims and methods of Socialism, Communism and the powers at work behind them. I have endeavoured to describe the marvellous organisation that has been set in motion by the enemies of the existing social order, and to show something of the nature of the people composing this vast army of destruction.

But the time has come to turn to the other aspect of the situation and to consider the quality of the defence. Superbly organised as the attack has been throughout, how long could it have been maintained if adequate resistance had been put up at the outset? Could Bolshevism have been nipped in the bud in 1918 as the Netherlands Minister demanded and as everyone at that date thought it must be before long ? In France the violence of the first great Revolution had spent itself in five years; in ten, Napoleon had taken the tormented country in an iron hand and stamped out-temporarily at any rate-the smouldering embers of the class war. Yet though for thirteen years we have been told incessantly that the Soviet regime was tottering to its fall, the despots of the Kremlin still hold sway over a helpless people, the dreaded Cheka still tracks down its victims far beyond the .Russian borders, and blood still flows in village streets where luckless peasants dare to defend their property and the symbols of their faith.

Advocates of Bolshevist theory would have us believe that there must be some inherent virtue in a regime that has lasted so long amidst the execrations of the civilised world. But execrations avail nothing against an organised despotism. They availed nothing in the case of France. Only a strong man could save the situation.

Unhappy Russia has produced no Napoleon, and in this mass attack on civilisation only one country has produced a man capable of grappling with the invading force of Bolshevism and of freeing his country from its deadly power. Everywhere except in Italy the peoples and their governments, as Monsieur Coty has expressed it, have seemed "paralysed, petrified before the monster, like people in the fable before the Gorgon's head" (Contre le Communisme, p. 14).

It is this inability of the civilised world to hold its own against the Soviet Power, rather than any enduring qualities in the Soviet regime, which has ensured its continuance up to the present time. The same disinclination to face realities, the same lack of organisation, and, worse still, the same treachery behind the lines on the home front which prolonged the war against Germany, have given to Bolshevism a new lease of life each time that it was about to fall. This strange phenomenon has occurred in every country-in Italy as well, up to the Fascists' march on Rome. All nations and all governments have shown weakness. It is therefore not my intention to represent Great Britain as singular in this respect. But because I have lived through what has taken place in my own country, and because its fate is of more concern to me than that of any other, I feel impelled to bring before those of my fellow-countrymen who care for England, the fatal consequences to which the policy of surrender to the forces of disruption has led,

In the following pages I shall endeavour to show how, from the beginning of the Great War up to the present moment, our worst foes have been those of our own household who- some through blindness, some through inertia, some through fear and some through perfidy-have weakened our resistance to the two most formidable enemies our country has ever had to face.