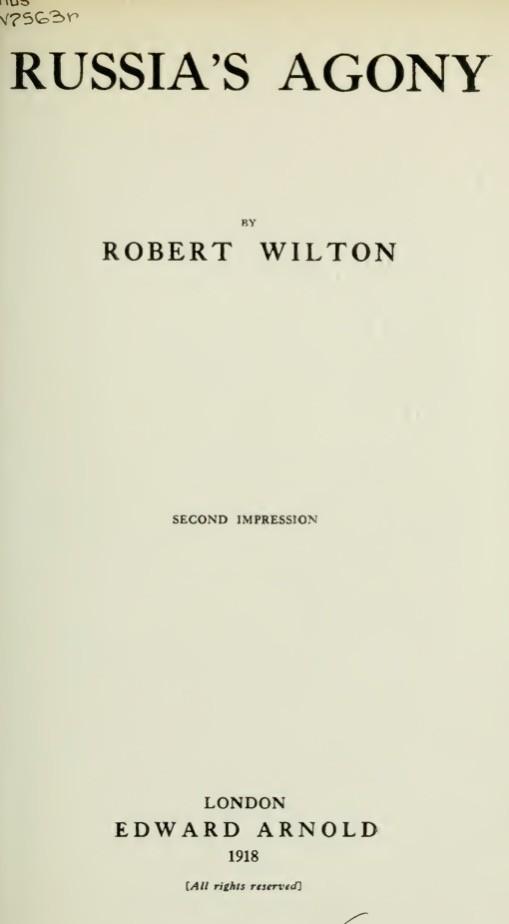 This book is a living record of personal experience of Russia among the Russians dating back nearly half a century. I claim no merit for it other than sincerity and freedom from race or party bias. I have no interest to serve except my British birthright, which is perhaps dearer to me bceause of my long exile. And in this feeling of love and reverence for England I associate Russia as the land of my childhood and France as the home of my dearest ties.

During the past fourteen years I have been an eye- witness of events in Russia, and able to study at first-hand the manifold aspects of Reaction and Revo- lution, as each in its turn was exploited by our relent- less foe. I was the only non-Russian civilian who participated in all the phases of the collapse of Soeialism as a national force in July last during the short-lived offensive and disastrous retreat of the armies in Galicia, which was also the death-knell of the Revolution. The men who have figured in Russian affairs during that long period are personally known to me, and thanks to my relations with the Army, I have been able to study the Russian soldier under all conditions of service.

The temptation to relate all I knew in book form has often been very strong, because few people realized more clearly how little was known about the Russians outside, and how much harm this ignorance caused to our relations with them. But the whole truth could not be told during the Old Regime, and I preferred not to produce a halting narrative-a half-truth. The obstacles to a frank state- ment of Russia as she was and as she is having been removed, I have lost no time in presenting her ease to my fellow-countrymen and allies according to the best of my knowledge and understanding without fear or favour.

My conclusions are set forth in the closing chapter. I do not propose to deal with them here, except to call attention to the character and lessons of Socialism as exemplified in the Russian Revolution. They are of momentous significance to every thinking man and woman of the Allied nations--to the working-man equally with his employer. They closely affect the great issues that we, through our blindness to the responsibilities of nation- hood, have been called upon to solve at such great cost of blood and treasure. Socialism has ever promised an easy path, but we have seen whither it has led Russia. No organization of the masses-not even the election of a popular Constituent Assembly-could there save Socialism from the dominance of Extremists and conse- quent Anarchy.

When the heroic struggle of the Nations for Freedom and Independence has drawn to a close, and war let us hope-becomes unknown for a long time, Russia, strengthened by her ordeal, will continue to engage our interest and attention. \Ve cannot do without her for many reasons. She is destined by the operation of natural and economic laws to figure as one of the greatest-if not Ihe greatest markets and food-producers in the world. So we would do well to study her more closely, and to neglect no opportunity of adding to our know- ledge of the Russian people. This message applies more particularly to us and to our American cousins.

In popularizing knowledge of a people allied to us by the strongest of ties, I have tried to follow in the foot- steps of my Chief, to whom my thanks are due for his inspiring example. To him and to the Editor and Manage- ment of The Times I am beholden for many facilities extended to mc in the production of this book. I also have to thank the Management of the Daily lllirror for the loan of' some excellent photographs.

In the rendering of Russian names and words I have adopted the simplest method of transliteration and accentuation available. Only the New Style is used in dates, and equivalents in sterling are given at the normal rate of exchange.