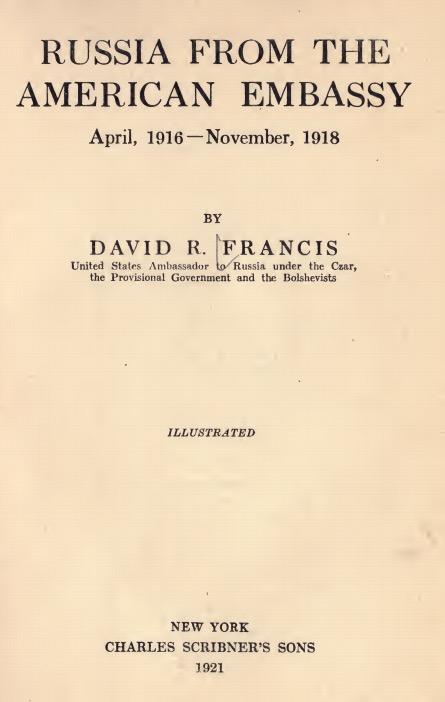 My commission as Ambassador to Russia was dated March 9th,1916. As I was so long in regaining my health and strength after leaving Russia, I offered to resign the Ambassadorship three or more times, but each time the Secretary of State or the Acting Secretary dissuaded me from presenting my resignation. I have drawn no salary as Ambassador since the 26th of April, 1919, but since then I have held myself subject to being sent back to Russia as American Ambassador in the event a stable government was established there. At no time was there any likelihood of our recognizing the Bolshevik Soviet Government. My resignation as Ambassador to Russia was presented on the 3rd of March, 1921, but I have not had advice of its acceptance up to the present writing. It will be seen, therefore, that my services have covered five years.

During this period I was credited to the Monarchy of Russia thirteen months. I represented the UnitedStates with the Provisional Government of Russia for eight months. I remained in Russia from the inception of Bolshevik usurpation and until within five days of the Armistice, when a surgical operation necessitated removal to a hospital in London.