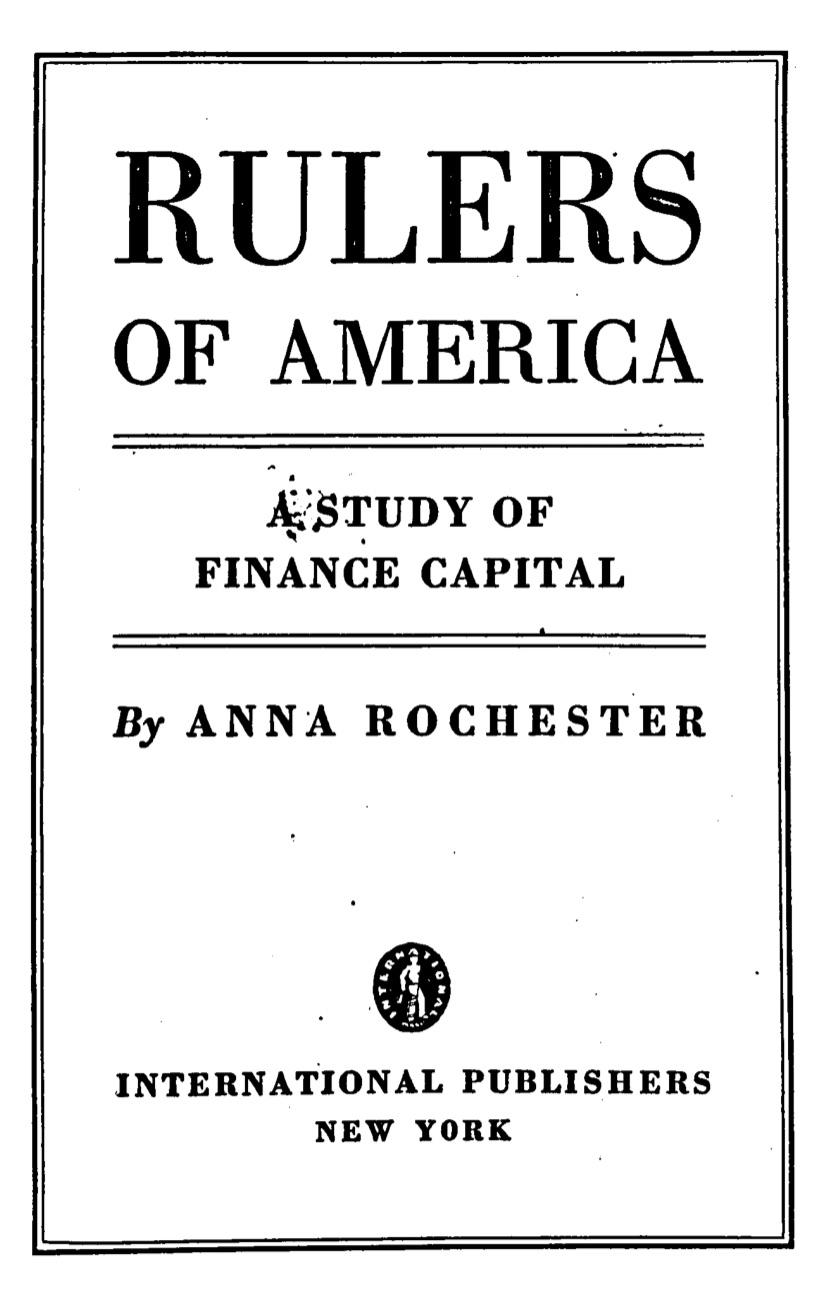 James W. Gerard, lawyer and former ambassador to Germany, stated in August, 1930, that this country was ruled by 59 financiers and corporation officials. His list was both too long and too short. For he made no distinction between the much smaller number of actual rulers and their chief lieutenants. And, of course, he omitted scores of secondary men who are responsible and important executives within the chief financial empires. But Gerard’s list spread forth as front page news the fact that financial control had continued, unshaken by Standard Oil exposures, the Pujo Report^ Supreme Court decisions, post-war regulating commissions, and the firstly ear of the great economic crisis which began in 1929.

Since then various Senate investigations have piled up fresh evidence of the power and the methods of the inner Wall Street rulers. As this book is completed, Morgan partners are appearing before the Nye Committee investigating the munitions industry. The chief news of the day includes facts on the part played by the Morgan firm in 1914-15 in promoting the war boom and the war loans which tied American business interests to the cause of the Allies and led to irresistible pressure for America’s entering the World War.

Financial rulers are important, not as picturesque figures, strong in their lust for wealth and power, but as the heads of the economic empires in which American capitalism reached its peak of development. To sketch their empires is part of our task, but that is not enough. We must raise certain basic questions. What is the essential pattern of control in the United States? What are the underlying trends from which it developed? What is the effect of this control in the life of the people? Will power pass from the financial rulers through their inner collapse?

In working toward an answer to such questions we are concerned primarily with economic facts. And since material on wealth and income and the general condition of the working class is relatively abundant, we have focused attention in this book on the structure and pattern of finance-capitalist control. Its relation to poverty and to the workers’ movement is indicated.

Of course every selection and analysis of facts reflects a writer’s understanding of economic theory and his sympathies in the clash be* tween capitalism and socialism. The present book is based on the economic and political teachings of Marx as developed for the imperialist era by Lenin. It attempts to show the broad outlines of capitalist structure in the United States and illustrates for this country the basic argument presented by Lenin in his Imperialism, the Highest Stage of Capitalism.

Part I, “The Rulers and their Domain,” describes the principal financial groups and outlines the principal ways in which they exercise control and the effect of the development of finance capital on the distribution of income in the United States.

Part II, “Control in Selected Industries,” gives some details of their grip on nine industries, with special reference to the confused interplay of monopoly and competition.

Part III, “Capitalism in Crisis,” reviews the facts about American foreign investment, colonies and spheres of influence and analyzes the economic crisis-depression against the background of the general crisis of capitalism.

This study is sponsored by the Labor Research Association which has, at every stage of the work, given counsel and help. The writer has also had invaluable assistance from several persons who do not share the writer’s views. Special acknowledgment is due to Elsbeth E. Freudenthal who aided in the research and the checking of material and herself wrote three Of the chapters on selected industries, and to the staff of the Economics Division of the New York Public Library without whose patient courtesy and knowledge of original sources the writer would have been unable to locate much of the necessary material.