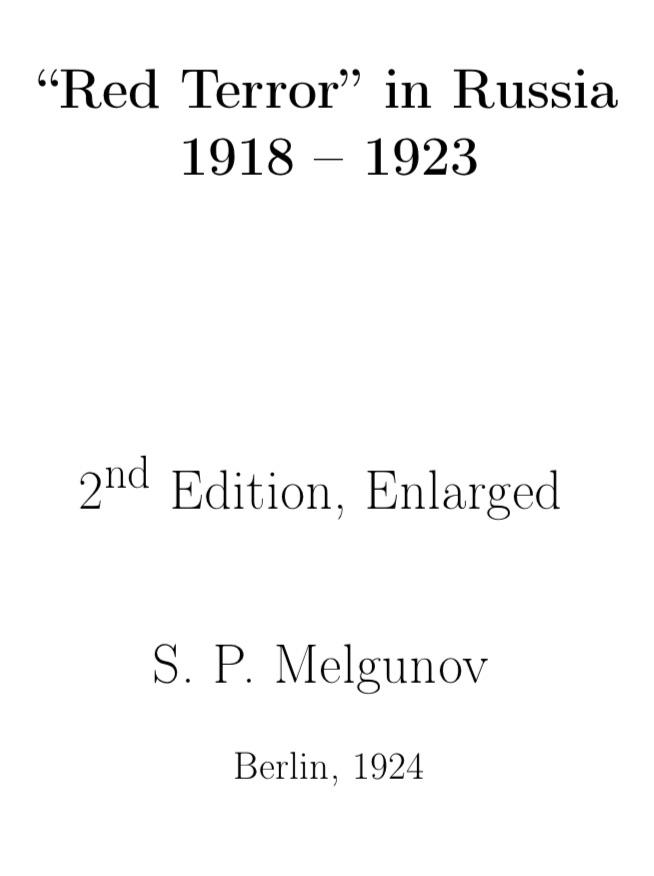 The works of S. Melgunov are not a popular reading matter, not now, not in Europe and North America. They are not nearly so well known as the works of A. Solzhenitsyn such as “Gulag Archipelago”, “Red Wheel” or “Cancer Ward”. Published in 1924 last time, “Red Terror” was translated to English and published by Hyperion Press only in 1975. It appears to be out of print, never re-printed since.

I came across “Red Terror” when researching material for an article on contem- porary religious, political and ethnic terrorism in the 21st century and did use many quotes from S. Melgunov’s writing. But also I realized that it was my civil duty to the peoples of Europe and North America to translate his book into English for the very first time.

The motivation for translating originated from realization, that many methods of the Bolsheviks are being more and more applied in today’s Western hemisphere: cyn- ical lies in mass media, confiscation of property, disarming of population, alienation of the young generation, re-defining the language. Even though I was intimately fa- miliar with the methods of communist regime in Russia, the book was en eye-opener in many areas. I even recognized some of the facts and could correlate them to the stories my grand-mother told me, even though she was only 8 years old when “Red Terror” 2nd edition was published in Berlin. Her stories were from the more recent late 1920s, but they were frightfully similar: searches by night, arrests, disappearance of people, executions, tips by the informants, poverty and suppression of rights.

Then there were Soviet era movies, such as “Ours among them, theirs among us”1: rittmeiser Lehmke telling Che-Ka operative Shilov that “you will return this gold, but your own will shoot you for that!” Only after reading “Red Terror” I realized what message the movie was trying to covertly convey: the story of captain Schastny – the saviour of Baltic navy from capture by German fleet (see p. 37).

One of the sources that S. P. Melgunov extensively quoted from – “Vessel Of Death” – is worth adding to this book as an appendix. At some point I will probably translate the entire “Che-Ka” almanac if time and resources permit.

Reviewing the book “Red Terror in Russia...” by S. P. Melgunov one cannot help but notice a grave injustice.

While Jewish holocaust was widely recognized, condemned on personal and in- stitutional level and lead to virtual banning of organizations (Nazi party, neo-Nazi affiliations, assemblies), press, symbols and even gestures, the more numerous, wide- spread and just as systemic democide by the communist party did not result in any kind of prosecution whatsoever. While Mossad was hunting down and even kidnap- ping the Nazi and their collaborators around the world, the crimes of communism were shoved under the rug. Soviet Union remained a recognized country for over 70 years that followed. That country was ruled by the Political Bureau of the Communist Party Central Committee (and not by the Soviets of the People’s Deputies as they would want us to belive – the soviets were powerless puppets). In other words that was a Communist party ruling the country. Thus the world recognized Communist party as a legitimate government despite multi-million genocide it committed.

One after another the “enlightened” democracies of the world first turned a blind eye and deaf ear to the plight of Russian population, than basically embraced thuggish psychopathic communist regime by recognizing Bolshevik government. While red terror was ravaging Russia and millions were executed in cruel and grotesque manner, tortured, intentionally starved to death, deprived of medical assistance, raped, robbed of all property, exiled to remote areas with severe cold climate, the world celebrated demise of a powerful emerging competing economy that Russian monarchy was.