Home Books On the Protocols (1943) by Ezra Pound 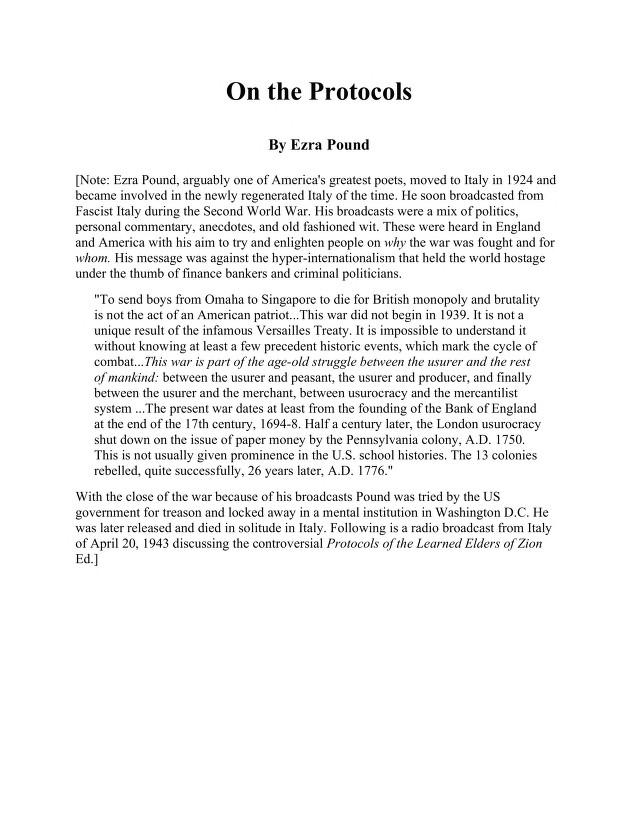 Ezra Pound, arguably one of America's greatest poets, moved to Italy in 1924 and became involved in the newly regenerated Italy of the time. He soon broadcasted from Fascist Italy during the Second World War. His broadcasts were a mix of politics, personal commentary, anecdotes, and old fashioned wit. These were heard in England and America with his aim to try and enlighten people on why the war was fought and for whom. His message was against the hyper-internationalism that held the world hostage under the thumb of finance bankers and criminal politicians.

"To send boys from Omaha to Singapore to die for British monopoly and brutality is not the act of an American patriot...This war did not begin in 1939. It is not a unique result of the infamous Versailles Treaty. It is impossible to understand it without knowing at least a few precedent historic events, which mark the cycle of combat...This war is part of the age-old struggle between the usurer and the rest of mankind: between the usurer and peasant, the usurer and producer, and finally between the usurer and the merchant, between usurocracy and the mercantilist system ...The present war dates at least from the founding of the Bank of England at the end of the 17th century, 1694-8. Half a century later, the London usurocracy shut down on the issue of paper money by the Pennsylvania colony, A.D. 1750. This is not usually given prominence in the U.S. school histories. The 13 colonies rebelled, quite successfully, 26 years later, A.D. 1776."

With the close of the war because of his broadcasts Pound was tried by the US government for treason and locked away in a mental institution in Washington D.C. He was later released and died in solitude in Italy. Following is a radio broadcast from Italy of April 20, 1943 discussing the controversial Protocols of the Learned Elders of Zion.