New Lies for Old: The Communist Strategy of Deception and Disinformation (1984) 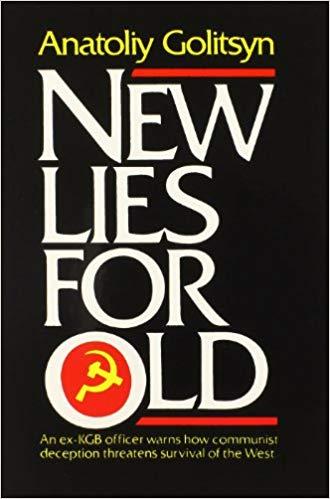 In 1984, Golitsyn published the book New Lies For Old, wherein he warned about a long-term deception strategy of seeming retreat from hard-line Communism designed to lull the West into a false sense of security, and finally economically cripple and diplomatically isolate the United States. Among other things, Golitsyn stated:

The "liberalization" would be spectacular and impressive. Formal pronouncements might be made about a reduction in the communist party's role: its monopoly would be apparently curtailed. An ostensible separation of powers between the legislative, the executive, and the judiciary might be introduced. The Supreme Soviet would be given greater apparent power, and the president of the Soviet Union and the first secretary of the party might well be separated. The KGB would be "reformed." Dissidents at home would be amnestied; those in exile abroad would be allowed to return, and some would take up positions of leadership in government.

Sakharov might be included in some capacity in the government or allowed to teach abroad. The creative arts and cultural and scientific organizations, such as the writers' unions and Academy of Sciences, would become apparently more independent, as would the trade unions. Political clubs would be opened to nonmembers of the communist party. Leading dissidents might form one or more alternative political parties.

There would be greater freedom for Soviet citizens to travel. Western and Unitized Nations observers would be invited to the Soviet Union to witness the reforms in action.

Angleton and Golitsyn reportedly sought the assistance of William F. Buckley, Jr. (who once worked for the CIA) in writing New Lies for Old. Buckley refused but later went on to write a novel about Angleton, Spytime: The Undoing of James Jesus Angleton.