National Security Through Civilian Based Defense (1985) by Gene Sharp

National Security Through Civilian Based Defense (1985) 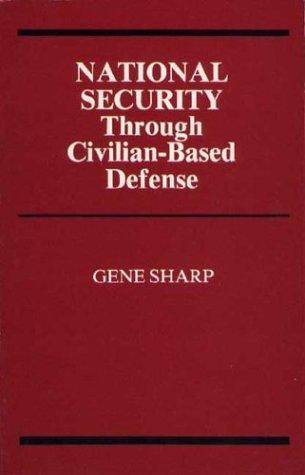 Many people are now convinced that we need alternatives to present military deterrence and defense policies. The alternatives are usually still sought within the context of military assumptions and means, and so far only rarely beyond them. The search for alternatives is important and needs to be intensified. Present policies, with their serious limitations, would retain few supporters if superior substitute policies existed and were widely known.

Therefore, rather than dissipating our energies arguing about the merits and demerits of present and impending policies, or about the moral adequacy of just war and pacifist positions, we ought to focus primarily on developing effective alternatives and spreading public awareness of them.

This booklet is about one such alternative: civilian-based defense, that is, national defense against internal usurpations and foreign invasions by prepared nonviolent noncooperation and defiance by the population and the society’s institutions. The aim is to become able to deny attackers their objectives, to become politically unrulable by would-be tyrants, and to subvert the attackers’ troops and functionaries to unreliability and even mutiny. Such a prepared capacity, accurately perceived, would provide a different type of deterrent: facing such defense capacity, rational would-be aggressors would choose to stay away!

This policy has reached the level of governmental studies in several European countries. In North America it is receiving growing attention.

Civilian-based defense is not a panacea, nor a doctrine for which believers are sought. We all need to think for ourselves about its ap- plication, problems, and potential. We need to suggest to others, if we agree, that it merits investigation. On the basis of greater knowledge and understanding, the policy might be rejected as ineffective or inapplicable. It might, however, be found to provide the basic capacity to enable us to solve both the problems of aggression and of war.

This booklet has been prepared in response to expressions of need for such a brief publication on alternative defense conveyed to me during lecture trips in various parts of the country, from Maine to New Mexico. This booklet is only an introduction to civilian- based defense. Persons who find this of interest are strongly urged to study also the publications recommended for further reading. A newsletter and other educational projects on the policy are being undertaken by the Association for Transarmament Studies, 3636 Lafayette Avenue, Omaha, Nebraska 68131.

The main essay of this booklet was originally published in War/Peace Report (New York), April 1970, and was included in my Exploring Nonviolent Alternatives (Boston: Porter Sargent Publishers, 1970). The original title was “National Defense WithoutArmaments.”Theessayhaslargelystoodthetestoftime, and has needed only the addition of several substantive discussions and slight editing for this edition.

“Research Areas and Policy Studies on Civilian-based Defense” is a further revision of two previously published papers on the topic: (1) “Research Areas on the Nature, Problems and Potentialities of Civilian Defense” in S.C. Biswas, editor, Gandhi:Theory and Practice, Social Impact and Contemporary Relevance: Proceedings of a Conference. Transactions of the Indian Institute ofAdvanced Study, Volume Eleven (Simla: Indian Institute of Advanced Study, 1969), pp. 393-413; and (2) “Research Areas on Nonviolent Alternatives” in my Exploring Nonviolent Alternatives, pp. 73-113.

Several aides to thought, study, and action have been added to increase the usefulness of this booklet.