Migration of British Capital to 1875 (1926) by Leland Hamilton Jenks 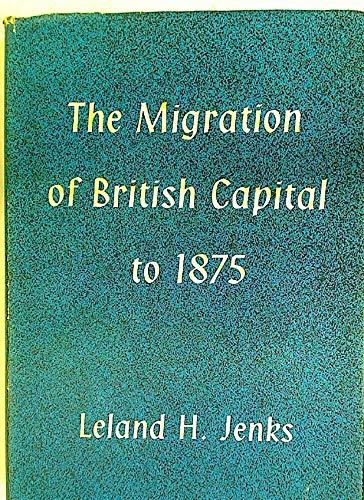 Marcus Aurelius, who set the fashion for acknowledgments, was able to trace with brevity yet with care the qualities of which his meditations were the fruit to the friends who had most intimately affected his character and molded his attitude toward life. Were I to begin to enumerate the persons to whom I am conscious that some aspect of this book is due, the patience of the publisher would be soon exhausted. I can only say that in bringing my materials to some sort of literary unity, the imaginative sympathy of Mr. Walton H. Hamilton of the Robert Brookings Graduate School, first secretary of the Amherst committee, has been a constant inspiration.

The insight of Dr T. E. Gregory of the London School of Economics aided me while in London to some, understanding of British finance. A long-continued interchange of ideas with my friend and former student Dr. Edward S. Mason, of Harvard University, has been invaluable in clarifying my fundamental economic conceptions.

The manuscript has also had the benefit of the criticism of Professors C. J. H. Hayes, R. L. Schuyler, E. R. A. Seligman, and Dr. James W. Angell, of Columbia University; Professor Paul H. Douglas, of Chicago University, second secretary of the Amherst committee; and Dr. Charles O. Hardy, of the Institute of Economics, who first showed me the interrelation of history and economics. Chapter III has been read by Professor Arthur Cole, of Harvard ; Chapter VIII by Mr. Edgar Speyer, of New York City; and Chapter IX by Mrs. Margaret Briscoe Hopkins, of Amherst, Massachusetts. I am under obligations to the Macmillan Company and Macmillan & Company, Ltd. for permission to use extracts from Sir Henry Drummond Wolff's Rambling Recollections. And I wish finally to say to some young mar who were from 1923 to 19^5 students of mine in Amherst College, that, in delaying, they helped mature this book.