Merchants of Death: A Study of the International Armament Industry (1934)

A rare-book exposing the truth about the industry which powers the global war-machine. 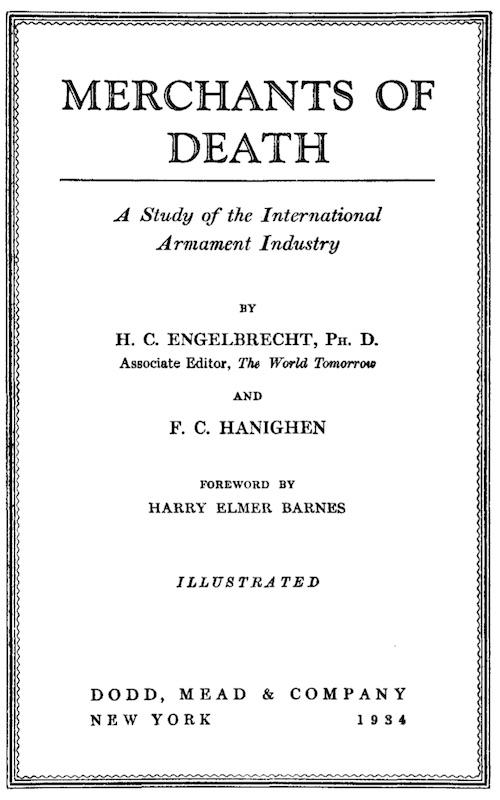 IT is an unmitigated pleasure for me to commend this study of the international armament industry to the civilized reading public. In several important ways this book is an outstanding contribution to the literature of history and the social sciences.

In the first place, it points out a great gap in our knowledge of a branch of technology and industry and makes a valiant beginning at filling it. The evolution of firearms has played a very important part in the destiny of modern nations. Yet, for no generation or country is there a thoroughly satisfactory monographic treatment of the evolution of the firearms industry therein. There has been no end of writing on the wars which have been fought, but little or nothing is told us about the reason why soldiers in the Spanish-American War were more effectively armed than those of General George Washington, and even less is told about the source of armament supplies in the various wars. Histories tell us that the Prussians were armed with the "needle gun" in the War of 1866, but not one history professor in a dozen could explain what the "needle gun" actually was or indicate the transition from the muzzle loading to the breech loading muskets.

In the second place, this study reveals illuminating information with respect to the organization and sales methods of a very considerable industry. The propaganda and high pressure salesmanship which has characterized contemporary business finds its prototype in the activities of armament manufacturers long before our generation.

There is no denying the importance of wars, particularly wars waged with contemporary methods of devastation. Wars may be a menace to the race, but their increasing ravages only make them more significant in at least a negative sense. If wars can no longer make any considerable constructive contribution to human life, they have become increasingly potent in their capacity to dislocate society and to destroy civilization. In his latest book, Mr. H. G. Wells has given us a vivid and appalling forecast of the horrors of the next world war. The technology of armaments con- trols the material sinews of war. As the effectiveness and deadliness of armaments has increased; war has become more devastating and demoralizing. Nothing could be more helpful than a systematic history of the armament industry in enabling us to understand why mankind needs to busy itself particularly today in bringing the material technique of mass murder under control if we wish to preserve the semblance of modern civilization. This is the third outstanding merit of this book.

A fourth characteristic of this volume will commend itself to thoughtful readers, namely the comprehensive and complete character of the treatment given to the armament industry. Here is a satisfactory history of its development, an outline of its achievements, a delineation of the methods which have been followed by leading armament firms, an exposure of the degradation of ethics which has accom- panied the efforts of the armament moguls to market their products, and an indication of the bearing of the whole his- torical study upon the outlook for world peace.

Not less impressive than the comprehensiveness of the work is the sane and reasonable tone which pervades the whole study. Most accounts of the armament industry have been written by men and women who possess all the fervor of the valiant crusader against war. It is no disparagement of the usefulness and courage of the ardent pacifist to point out that this crusading psychology does not always supply the best background for a sane perspective on the causes of war. When a professional pacifist cuts loose on the armament industry, he frequently gives the impression that the armament makers constitute the chief menace to peace. By thus obscuring much more powerful factors which make for war, such writers render at least an indirect disservice to the cause of peace.

Dr. Engelbrecht and Mr. Hanighen do not fall victim to this temptation. They thoroughly expose all the evils of the armament industry, but they remain at all times conscious that broader forces, such as patriotism, imperialism, nationalistic education, and capitalistic competition, play a larger part than the armament industry in keeping alive the war system.

In another respect also is their reasonableness conspicuously apparent. They expose the corruption, graft and dis-loyalty of the armament makers with a thoroughness suffi- cient to gratify the most determined pacifist. At the same time, they make no effort to portray these armament pirates, their lobbyists and salesmen, as peculiarly depraved members of the human race. They recognize that they are no more corrupt than, for instance, our own great investment bankers. If British tank-masters hastened to sell Russia tanks while their government was about to break off diplomatic relations with Russia, so did Mr. Mitchell and Mr. Wiggin sell short the stock of their own banks. If British airplane companies were ready to sell aircraft to the Hitler government, so did Mr. Sinclair and his associates make vast profits at the expense of their own stockholders.

Even in the armament industry the bankers have set the pace for chicanery. Few armament manufacturers have duplicated J. P. Morgan, Sr.'s sale of defective arms to John C. Fremont during the Civil War. When it comes to economic corruption, John T. Flynn's book on Graft in Business presents a far more sorry record than does this present volume. Moreover, even though the armament makers have played a prominent part in encouraging wars, rebellions and border raids, they never exerted so terrible an influence upon the promotion of warfare as did our American bankers between 1914 and 1917. Through their pressure to put the United States into the War these bankers brought about results which have well nigh wrecked the contemporary world.

Armament makers and bankers alike are the victims of human cupidity. The only way in which the armament makers are at all unique is that they are engaged in an in- dustry where the death of human beings is the logical end and objective of their activity.

The calmness and sanity everywhere evident in this book will make its message and implications all the more devastating. The authors can rarely be charged with any over-statement or exaggeration. All in all, the book is a conspicuous contribution to industrial history, contemporary ethics, international relations, and the peace movement. It is bound to have a civilizing effect upon all intelligent and fair-minded readers.