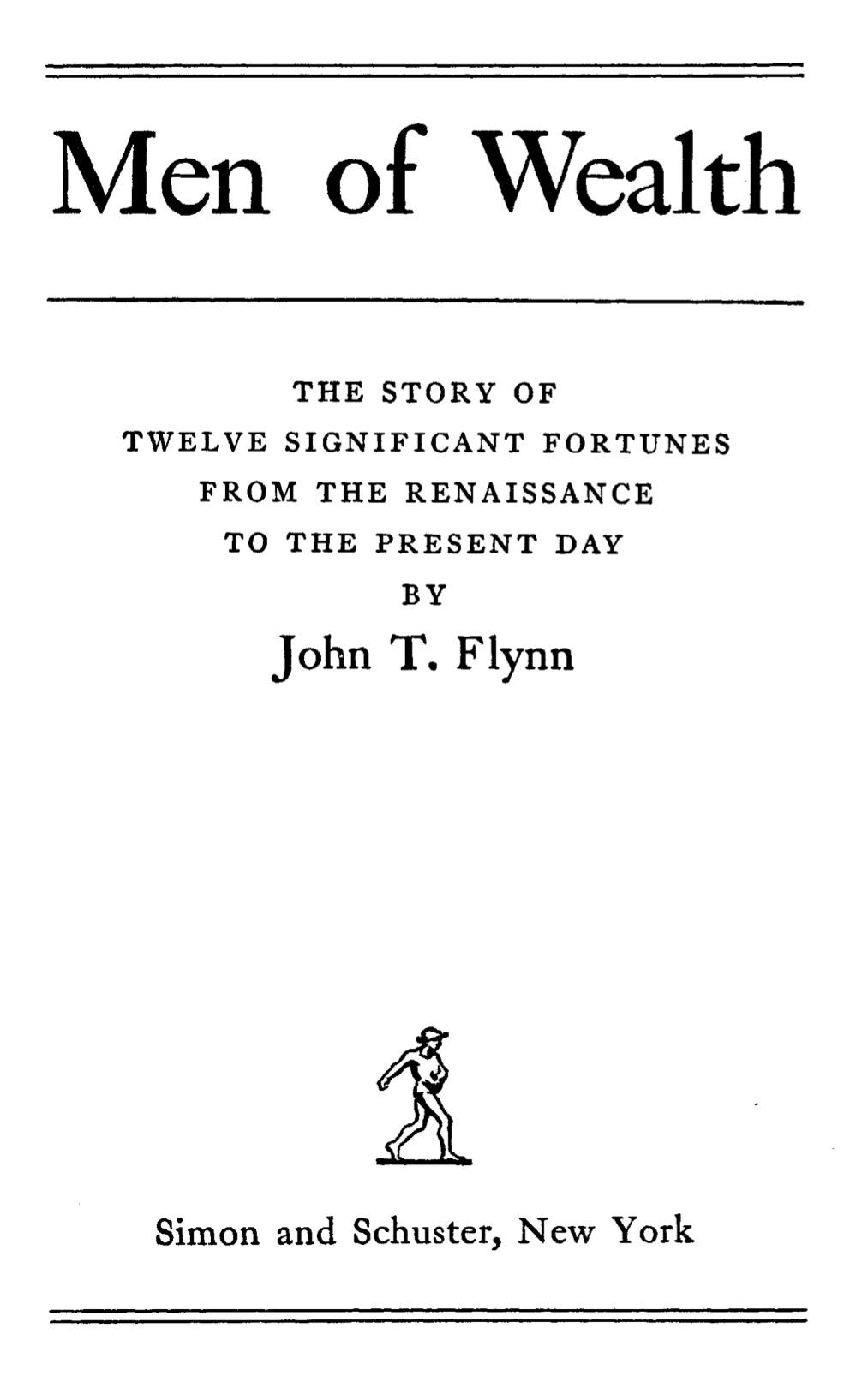 WHAT FOLLOWS IN this volume is obviously a series of biographical essays. They present the outlines of the lives of eleven men and one woman. They are offered as twelve significant fortunes since the Renaissance.

It would have been a simple matter to have made a somewhat different selection. I might have chosen one of the Medici or Sir Thomas Gresham or Jacques Coeur instead of Jacob Fugger in the dawn of the capitalist system. At a later period I might have written of the Brothers Paris or Samuel Bernard rather than John Law. I might have chosen Ouvrard, the financier of the French Revolution and Napoleon, as well as the Rothschilds. What excuse, someone will ask, can there be for including Cornelius Vanderbilt and not John Jacob Astor, Mark Hanna and not Carnegie, Hetty Green but not Jay Cooke or Jay Gould? And what reason can there be for leaving out Henry Ford and Andrew Mellon and the du Ponts?

In the course of the book I hope to make plain to the reader my reason for these choices. After all, the cast of characters of this or any other work having the same end must be determined upon some central principle of selection. I might have selected merely the dozen largest fortunes, in which event I would have left out not only Mark Hanna and Robert Owen, but J. Pierpont Morgan and, indeed, almost all of the others save perhaps Rockefeller, Vanderbilt, and Hetty Green. In fact, upon this standard of choice, it may be that Rockefeller alone could have been included.

Generally, what I have had in mind was to write of those figures in the history of wealth whose fortunes were, upon the whole, fairly representative of the economic scenes in which they flourished and whose methods of accumulating wealth offered the fairest opportunities to describe those methods. I have also tried to place these money-makers in certain important eras, putting more emphasis upon the latest. Having chosen Mr. Rockefeller as obviously the most important from any point of view in the period between 1870 and 1911, it was not possible to include Andrew Carnegie or Philip Armour or any of the oil barons in this country or Europe, however great the temptation. Having decided upon Vanderbilt I could not, without duplication, have added Gould or Huntington or Hopkins or Harriman or a score of other4 railroad kings.

Having chosen my subject my aim has been to make, as clearly and vividly as possible within the limits of a single essay, a picture of the economic system of the time; the means by which wealth was produced and the devices by which large amounts of it were siphoned off into the strongbox of the man of wealth. I have made, in part at least, one or two departures from this standard of choice. Hetty Green was selected because I wished to include at least one miser's fortune and one woman's fortune and happily she combined both. As for the omissions, I have left out several men whose lives I was sorely tempted to examine. Among them there was at least one Oriental fortune. There were one or two immense land fortunes. I omitted them because, after all, I felt they belonged not so much to the times in which they appeared as to a departed or at least a vanishing system of economic life. In the case of Mr. Ford—and this will hold for several others—I did not include him in obedience to a rule I made before I began my studies: that I would deal with the fortune of no living person.

I have been guided not merely in my selections but in the method of treatment by my conceptions of the means by which wealth is created and the mechanisms by which it is drawn off into the hands of rich men.

No man working with his own hands, upon materials of his own possession and creation, with tools of his own fabrication, can produce enough to make himself enormously wealthy. The problem of becoming rich consists in getting a fraction—large or small—of the produce created by the collaboration of many men using all these energies.

The whole history of wealth accumulation consists in tracing the devices by which one man or a small group of men can get possession of this fraction of the produce of many men. In the beginning, when there were no machines, no money, no intricate inventions of credit, no man could establish a right to a share of the products of other men save through a simple and bald assertion of ownership over the materials and the men. Landownership and human slavery were the first instruments of the acquisitive. And as no man could acquire dominion over enough land and
enough men to become rich save by an assertion of divine political power, we find the first rich men were kings.

As society grew and developed, men became individually more productive, on the one hand, and, on the other, the invention of money and credit enabled private individuals to establish claims upon the labor of ever-larger groups of men. We may say that the whole history of the art of accumulating wealth is the story of the invention of machines and the invention of the instruments of credit. Indeed, the two forces that distinguish the older world and its appalling scarcities from the newer world and its growing abundance are technology and credit.

Scientists and scholars slowly added one scrap of knowledge to another, one mechanical device to another, gradually wresting from the earth its undreamed-of resources and multiplying the productivity of men. At the same time businessmen were slowly discovering and perfecting the devices of credit. They began with the simple transaction of lending a quantity of grain out of one crop to be repaid out of the next. They invented money as a measure of value. They got around to making loans of money. Then they reduced the money-loan transaction to a written record and then to a written record that could be negotiated. The layman who takes modern business methods for granted scarcely dreams of the immense advances made with this dynamic energy of credit. At first, when one man loaned a hundred drachmas to another,
the drachmas had to be in existence before they could be loaned. We have proceeded so far that now we have the modern miracle of the bank loan in which money is actually created by the very act of lending it, so that we have the phenomenon of a nation using for its money the debts of its people.

My aim has been to present the histories of these men and their times as nearly as possible in terms of our own day. We are apt to think of the problems of our time, with its depressions, its armies of unemployed, its farmers crying for higher prices, its burden- some debts, its social devices for dealing with poverty, its programs and plans, as unique in history. We may suppose that the strata- gems by which our bewildered leaders have sought to elude fate and social disaster are quite new and untried. But it is not possible to wander through the market places and bourses and forums and slums of old cities and, indeed, ancient ones, without being struck by the parallels between their crises and our own. We shall see depressions in Florence, and France struggling against debt in the days of Louis XV, poverty tormenting farmers and workers in the Middle Ages and their sovereigns and premiers conferring and programming vainly against forces they did not understand which were changing their societies. We shall see businessmen and public officials quarreling about monopoly and government control and taxes and public debt and workers' claims and government spending. We shall behold economic messiahs with their gospels of peace and plenty all through the eras of Fugger and Law and Rothschild down to our own day. Men have been muttering about the same social ailments, the same disturbances, the same indignities and irritations for untold centuries.

These parallels, of course, can be pushed too far. The temptation is great. And because this will be evident I am eager at the outset to make it clear that I have faithfully sought to use no material that I have not laboriously examined and for which there is not ample support in history.

One further point. In the course of these several histories of rich men, questions have arisen and points have come to my mind which, it seemed to me, ought to be noticed. And yet I could not quite see how this could be done without interrupting the narratives with discussion that would serve only to distract the reader. I have attempted to solve this problem by including between some of the chapters certain interchapters in which I have offered brief observations on such of these questions and points as have in- terested me. The reader will find them in the interlogues so arranged that if he is sufficiently interested he may peruse them, and if he is not he may skip them without losing any of the essential parts of the twelve histories that follow.