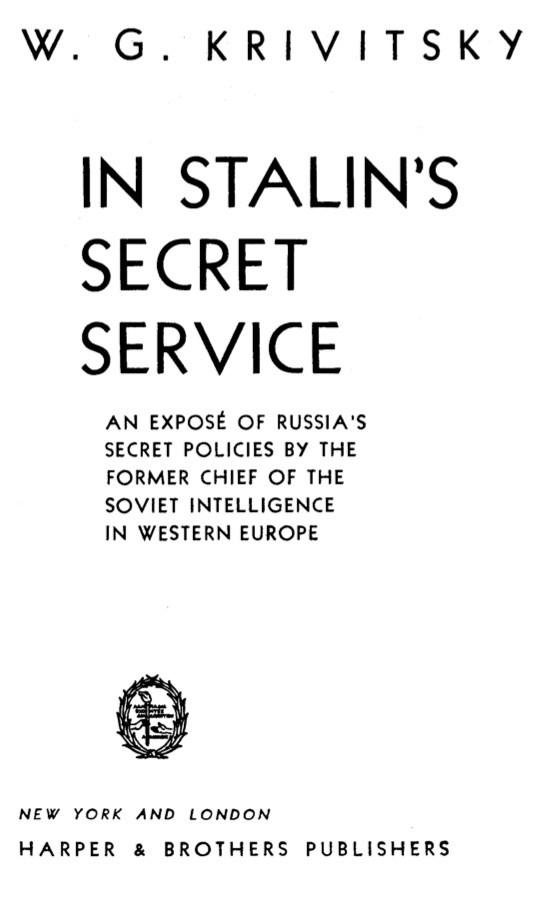 THE evening of May 22, 1987, I boarded a train in Moscow to return to my post in The Hague as Chief of the Soviet Military Intelligence in Western Europe. I little realized then that I was seeing my last of Russia so long as Stalin is her master. For nearly twenty years I had served the Soviet government. For nearly twenty years I had been a Bolshevik. As the train sped toward the Finnish border I sat alone in my compartment, thinking of the fate of my colleagues, my comrades, my friends-arrested, shot or in concentration camps, almost all of them. They had given their entire lives to build a better world, and had died at their posts, not under the bullets of an enemy but because Stalin willed it.

Who is there left to respect or admire? What hero or heroine of our revolution has not been broken and destroyed? I could think of but few. All those whose personal integrity was absolutely above question had gone down as "traitors, spies," or common criminals. Pictures flashed through my mind-pictures of the Civil War when these same "traitors" and "spies" faced death a thousand times without flinching; of the arduous days that followed of industrialization and the superhuman demands it made upon all of us, of collectivization and famine when we barely had the rations to keep us alive. And then the great purge-sweeping all before it, destroying those who had labored hardest to build a state in which man should no longer exploit his fellow man.

Through the long years of struggle we had learned to repeat to ourselves that a victory over injustices of the old society can only be attained with moral as well as physical sacrifice, that a new world can not come into being until the last vestige of the habits of the old has been destroyed. But could it be necessary for a Bolshevik Revolution to destroy all Bolsheviks? Was it the Bolshevik Revolution that was destroying them, or had that revolution itself long since perished? I did not answer these questions then, but I asked them ...