I Testify Against The Jews (1953) by Robert Edward Edmondson 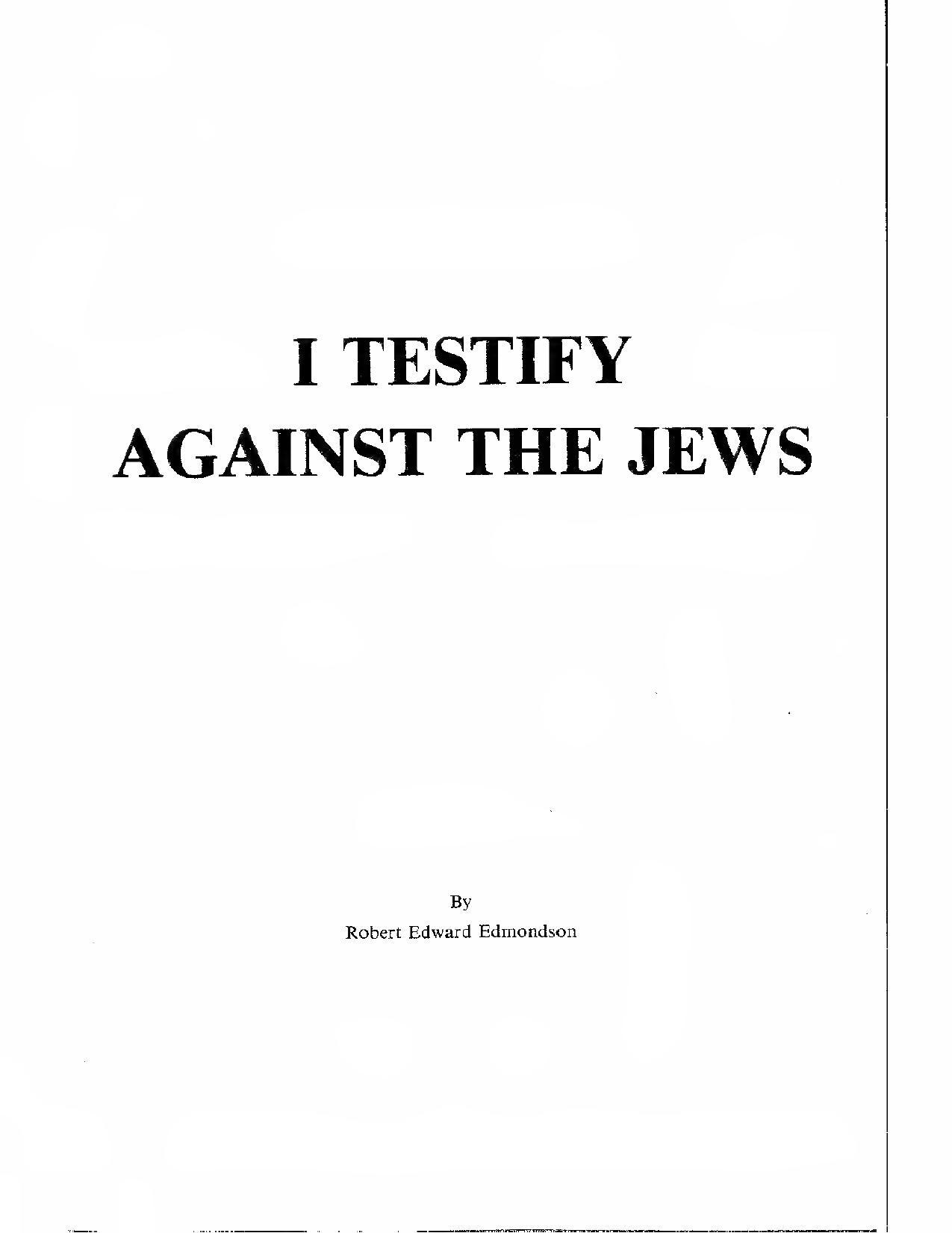 This book is humbly dedicated to ‐

Marian Louise Edmondson, who, defying dual terror, faithfully stood beside her husband - to die before her time February 22, 1952, a heart attack victim. I hear testimony that she justified her existence by word and deed.

To "The Twenty Immortals,” that inspired band of fearless American lawyers, who, embattled in a courtroom of the Nation’s capital in 1944, went far beyond the Call of Duty in behalf of The Constitution versus the New Deal might, and in defence of impoverished Innocence ~ AND WON! And received the deserved judicial high-honor tribute: "You have maintained the highest traditions of your profession."

And to that magnificently courageous company of "fire-tested" men and women communistically smeared by New Dealer dominated newspapers of the Nation as "Crackpots of the Lunatic Fringe,” who, sacrificially hazarding all they held dear, enemy-hounded from pillar to post, with high morale and indomitable spirit, gave back blow for blow ‐ I take off my hat in reverential salute to rare individualistic valor.

With a veneration for Truth, a zeal for Principle and an unquenchable love for and loyalty to our immortal Constitution I hereby hail them with congratulatory felicitations on the ineluctahle fact that thEy alone in prophecy nearly two decades ago forecast, with incontestable accuracy, today‘s fulfilling exposures of direful socialistic subversions, which those heroic unsung militant Christian soldiers then envisioned and, cherishing no "passion for anonymity" (like their "invisible enemy") they patriotically broadcast signed warnings, to awaken unsuspecting countrymen to the imminence of the greatest danger ever menacing The Republic.

I would not be true to them nor to myself were I to fail, in the current crisis, to "stand up and becounted" publicly ‐ For The Republic!

To Them All: HONOR! PEACE! HAPPINESS!

"Inspection of the alleged libelous documents in this case will show the court that they are the result of mature study of the literature and press of the world. The defendant will have the right to occupy the time of the jury to read into the record a mass of material withOut end. There is no telling how many months trial might consume. It would develop racial and religious antagonisms that would rock the foundations of the community.”

The foregoing court argument was made May 2, 1938, by Defence Counsel Wise for Robert Edward Edmondson following backdown dismissal pleas by five amicus curiae, whose leadership is credited with having instigated a communistic misleading sectarian indictment, a violation of state and national guarantees of freedom of the press, and which petitions were succeeded On May 10, 1938, by an unconditional formal dismissal of the case by N. Y. judge Wallace.