Home Books HOLOCAUST AFFIRMERS - Their Ideologies, Their Methodologies, Their Antecedents, Their Raison D'être (2008) by Alexander Baron 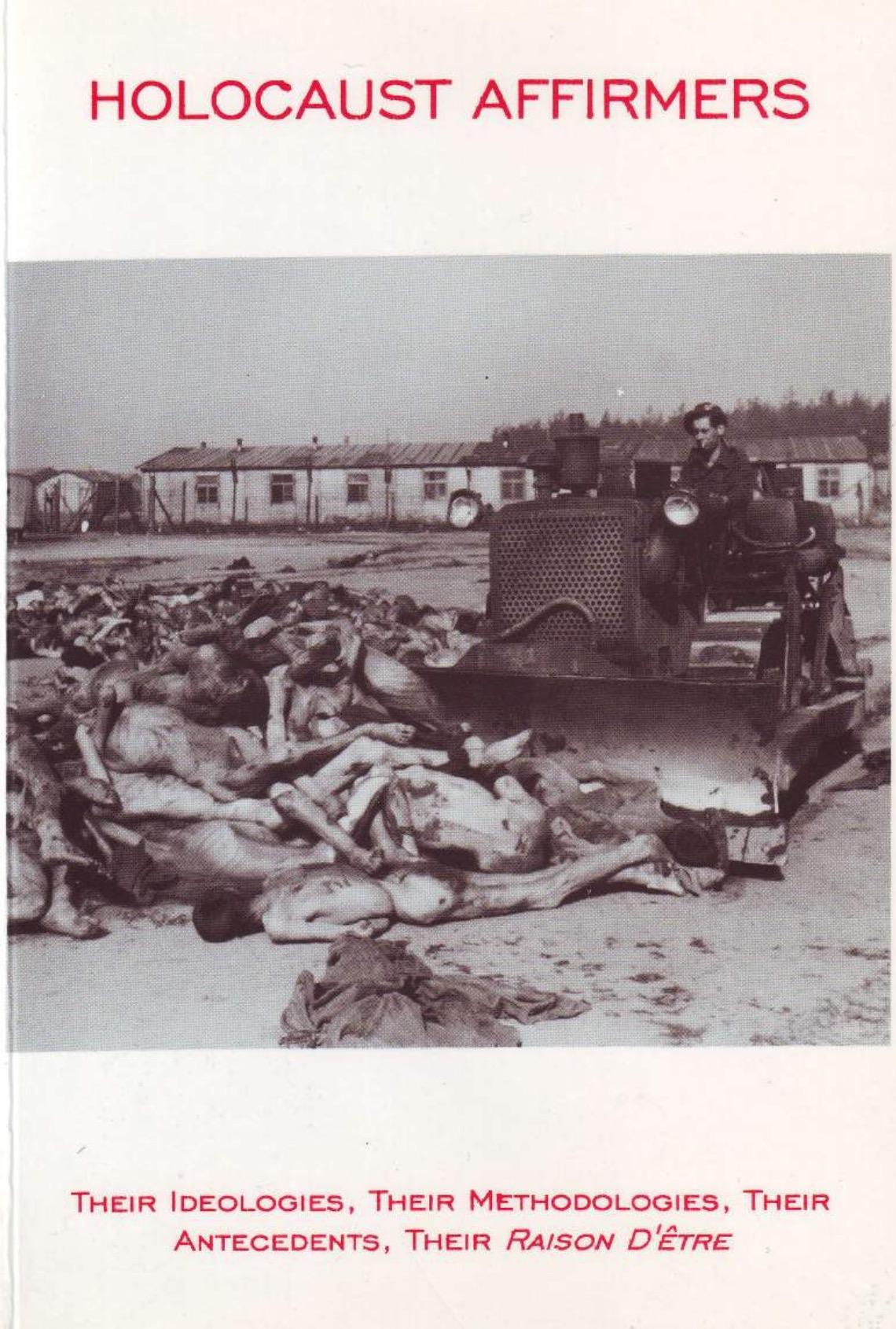 Over the past few years the subject of (so-called) Holocaust Denial has become a major issue in the Western media. Almost universally the men (6) referred to pejoratively as Holocaust Deniers have been portrayed as neo-Nazis, anti-Semites, cranks, or even as agents of a sinister international conspiracy hell bent on rewriting the history of the Nazi era in order to restore the Third Reich. Many people have been misled by the media propaganda about Holocaust Deniers and Holocaust Denial, primarily because the campaign against them has been well-orchestrated and the stories related about them have had a certain consistency. However, people who have probed behind the media propaganda have often come to radically different conclusions.

Although both are covered peripherally, this short study is about neither Holocaust Denial nor those who, for many reasons promote it. Rather it is about what we might call Holocaust Affirmers, in particular the people who actively oppose Holocaust Denial and those who accept the stories of survivors, Jewish organisations and other vested interests more or less uncritically. The current writer accepts that many of the criticisms levelled at so-called Holocaust Deniers have some, often a lot, of validity. Many of them do have far right and/or anti-Semitic antecedents, a few of them are outright Nazis, and at times some of them have placed ideology on a higher plane than truth. But there are always two sides to every coin, and in this short monographI propose to examine the other side, that of the Holocaust Affirmers.

I do not propose to limit this study of Holocaust Affirmers simply to their active opposition to Holocaust Denial, but to cover their various ideologies, their methodologies, and their antecedents in all their attacks on academic freedom, freedom of speech and individual liberty. And their raison d'atre. For the biggest fallacy in the manufactured controversy over Holocaust Denial and Holocaust Deniers is not the presumption of the bad faith of the Deniers, but the presumption of the good faith of the Affirmers.

A Note On Terminology

The term Holocaust Denier (usually denier with a lower cased) as popularised by Deborah Lipstadt is clearly a term of abuse. There are those who consider the term Exterminationist to be a term of abuse, including most Exterminationists. It seems that many of them object in particular to being represented as the other side, albeit the orthodox and accepted side, of a legitimate debate. Revisionists and the public at large are constantly reminded that there is no debate. The fact though is that, however much they may protest, there is a debate, a very real debate, and one which they have now given legitimacy to, however reluctantly, by their being dragged kicking and screaming to the debating table. The very fact that books such as AUSCHWITZ: Technique And Operation Of The Gas Chamber. have been written, indeed have to be written, means that a defacto debate exists.

I have used the term Holocaust Affirmers in this book as a mild pejorative. I used this term for the first time in my book HOLOCAUST DENIAL: NEW NAZI LIE or NEW INQUISITION? (9) As far as I know this is the first time it has ever been used, although I have no intention of attempting to popularise it.

One final point, this book is intended for distribution on both sides of the Atlantic. Some English words have slightly different spellings in the United States. In Britain, the word centre is spelt thus rather than center, and defence thus rather than defense. In this book I refer to the Wiesenthal Center and to the Jewish Defense League.

Alexander Baron is an independent researcher into the Holocaust, Zionist mischief-making and disinformation generally. He is the author of HOLOCAUST DENIAL: NEW NAZI LIE or NEW INQUISITION?,and Holocaust "Revisionism" And Fraud.