The History and Nature of International Relations (1921) 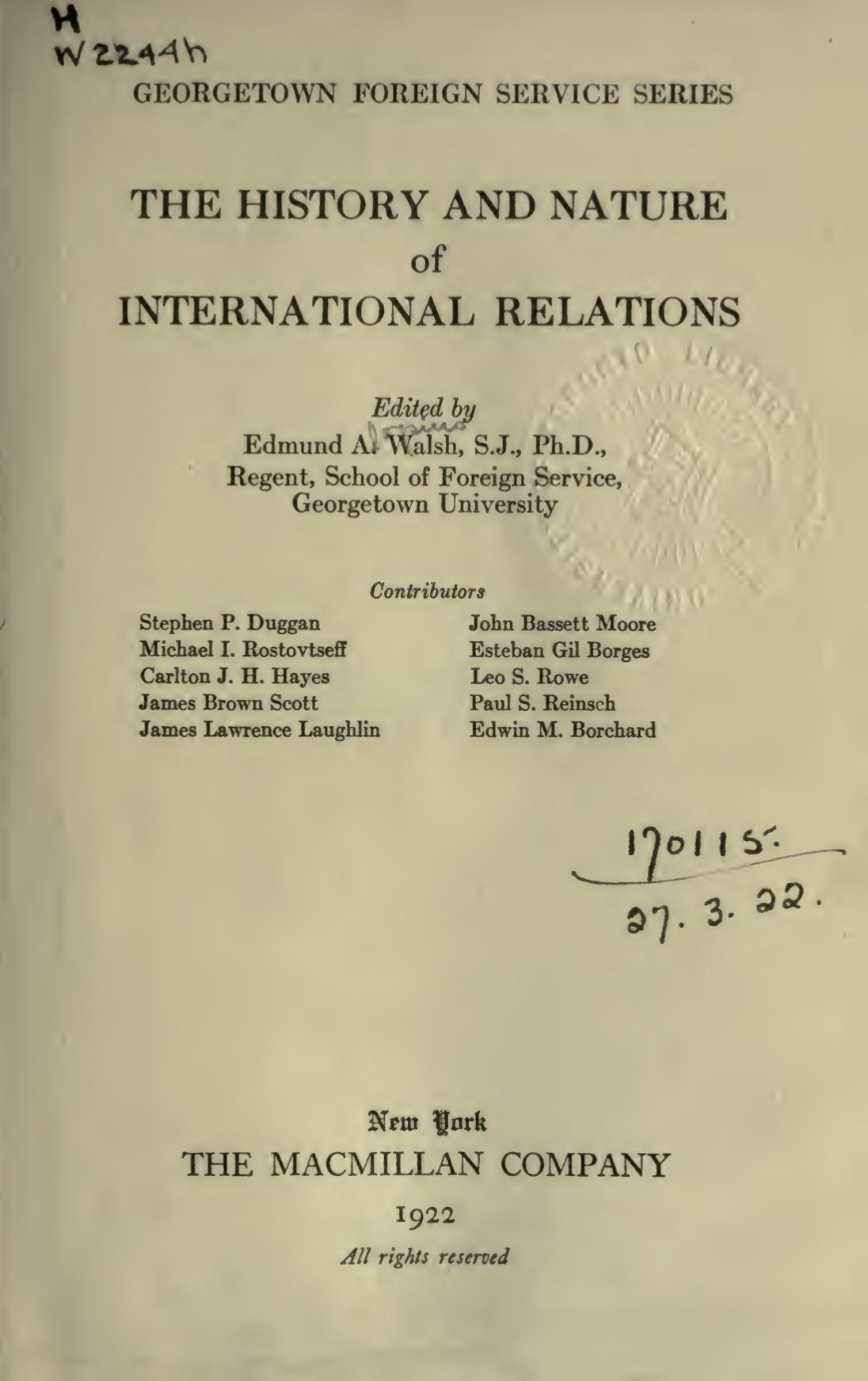 In order to afford the students of the School of Foreign Service of Georgetown University an opportunity to supplement and illustrate their classroom work by a rapid survey of the principal phases in the history of relations between sovereign states from the earliest antiquity down to our own times, the authorities of the School have undertaken to invite, each year, a number of distinguished scholars, each a master in his respective field, to deliver a special course of lectures on international relations.

The first fifteen of these lectures articulated into an organic whole and entitled "The History and Nature of International Relations," were delivered in the Auditorium of the National Museum, Washington, D. C, and were open to the general public. The presence, in gratifying numbers, of the general public on alternate Friday evenings during the winter and spring of 1920-1921 furnished abundant proof of the growing interest now being manifested by thoughtful Americans as well in theories of Political Science as in the actual conduct of our foreign relations.

The present volume reproduces such of the lectures as have been judged likely to prove of permanent value both for students of the School of Foreign Service and for general readers seeking authoritative guidance through the tangled maze of world politics.

Whether or not it is because the centre of political gravity in international affairs is to be found near, if not conterminous with the centre of financial gravity, it is beyond dispute that the Capital of the United States, at the present time, has become the focal point of interest for the civilized world. It was, therefore, never more imperative than at the present juncture to foster scientific study of the principles and practice of international relations and even of such preambles of the science of government as a right understanding of the origin of civil society and its first postulate, authority, since foreign policies will naturally be largely influenced by the philosophy underlying the decisions of those who direct the destinies of states.

The gunfire of an irresponsible fanatic at Sarajevo, seven years ago, unloosened elemental forces that not only swept crowns and thrones into the discard but tore the veil of respectability from a certain type of imported philosophy extremely popular in American universities, during the last two generations, but not professed so confidently since August, 1914. The "scrap-of-paper" solution of embarrassing difficulties arising out of international obligations is a logical through brutally expressed corollary of the metaphysics that would substitute expediency and the pragmatic sanction for the ethical basis of jurisprudence. It is hoped that the present volume will clear a satisfactory approach to the detailed studies of the various aspects of international relations which this series will present from time to time.

In conclusion, the Editor begs to express to the Regents of the Smithsonian Institution the thanks of the authorities of the School of Foreign Service for the use of the Auditorium of the National Museum; acknowledgment of great indebtedness is likewise made to Dr. Constantine E. McGuire of the Inter-American High Commission for his untiring labors in arranging the details of the course, to Dr. J. Franklin Jameson, Department of Historical Research of the Carnegie Institution of Washington, for his gracious words of introduction on the occasion of the first lecture, and to Mr. Thomas H. Healy, Secretary of the School of Foreign Service, into whose capable hands was entrusted the important but thankless task of correcting the proofs of this publication.