Also here is the pamphlet "No More German Wars" published a year later as a follow-up.

"A PLAN FOR PERMANENT PEACE AMONG CIVILIZED NATIONS!" 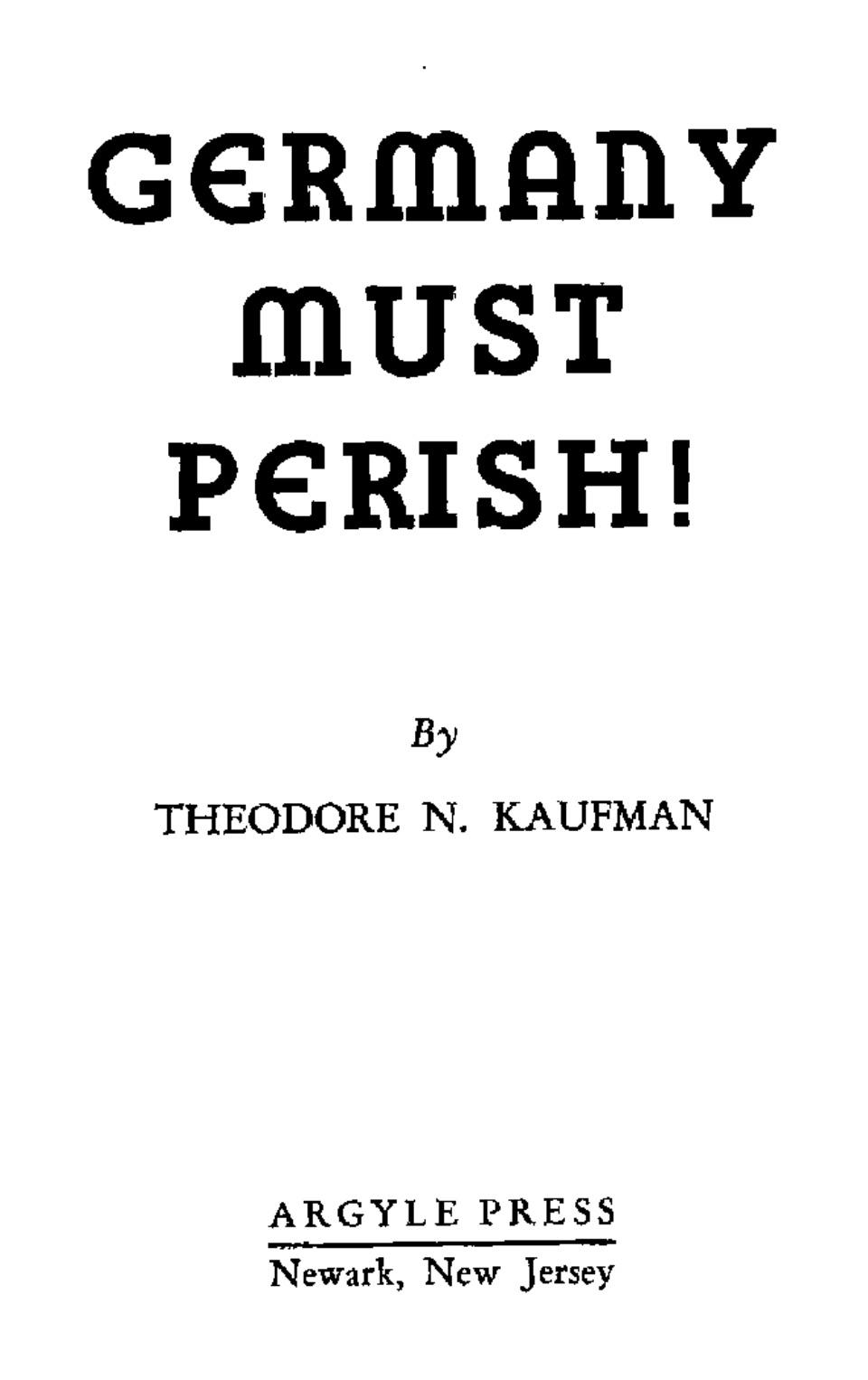 This March 1941 book written by a New Jersey Jewish-German émigré-caused a storm in Germany and America with its open advocacy of the physical extermination of all Germans and Germany itself. This was to be achieved through a process of mass sterilization, and the physical dismemberment of that country.

Arguing that Nazism was in fact just another expression of militant Germanism, the author said that the Germans would never change and the only way to end the ongoing struggle was to end Germany and the German people. Because of Kaufman's claimed links to the policy advisors of the American president, Nazi Propaganda Minister Joseph Goebbels used the book to help encourage Germans to fight to the last.

Ironically, significant sections of Kaufman's book, despite being dismissed as the work of a loner, came true. At least 12 million Germans were expelled from their land following the end of the war, and their deportation became the single largest transfer of any population in modern European history, and one-third of German territory was ethnically cleansed of Germans and permanently seized. Although the sterilization plan was never implemented, the collapse in the German birth rate, predicted by the author, has occurred, and even this part of the plan seems set to become reality.

As the author wrote:

"Of course, after complete sterilization, there will cease to be a birth rate in Germany. At the normal death rate of 2 per cent per annum, German life will diminish at the rate of 1,500,000 yearly. Accordingly in the span of two generations that which cost millions of lives and centuries of useless effort, namely, the elimination of Germanism and its carriers, will have been an accomplished fact."

Extract from: Revelations from Goebbels' Diary by David Irving:

A crucial episode in the “Final Solution,” as far as Goebbels is concerned – and this has been very little highlighted – came in 1941 with the publication in the United States of a strange little book, Germany Must Perish!, by an American named Theodore N. Kaufman. In it, Kaufman – who was, presumably, a Jew – recommends the castration of the entire German people, so that the Germans would literally perish within one generation. “Germany must perish forever!,” wrote Kaufman. “In fact – not in fancy.” Published at a time when the United States was still officially not at war against Germany, this book was given respectful, even laudatory attention by Time magazine, The Washington Post, and other periodicals.

Goebbels seized with delight on this nasty propaganda diatribe against the German people, with all its Freudian undertones. “This Jew (Kaufman) has done a disservice to the enemy,” Goebbels commented. “If he had composed the book at my behest he couldn’t have done a better job.”

Goebbels looked into the feasibility of having a million copies of a German translation printed up and distributed to German soldiers. He shelved the project because his lawyers pointed out that the project would violate US copyrights. You may laugh but, as he wrote in his diary, the reasoning was that if Germany violated American copyrights, America might feel justified in violating Germany’s very valuable copyrights. He had to wait another few months until certain historical events in Hawaii resulted in American copyrights not being so valuable after all.

Kaufman’s book figures in Goebbels’ diary as being the turning point that justified, in his mind, adopting a much more radical solution to the Jewish problem.

In August 1941, he went to show Hitler Germany Must Perish in translation, and persuaded him to agree to a plan by which every German Jew would be fitted out with a yellow Star of David badge with the word Jude. Goebbels argued that the Jews had to be tagged, and Hitler agreed. It’s interesting to note – and this can’t be emphasized enough – that again and again it’s Goebbels who goes to Hitler with radical plans, and Hitler agrees. It’s never Hitler initiating these plans. This is true even when the diary appears to indicate otherwise, as in the case of Kristallnacht and other episodes when, for reasons of politics and posterity, Goebbels felt it necessary to write: “The Führer fully endorsed what I had done.”