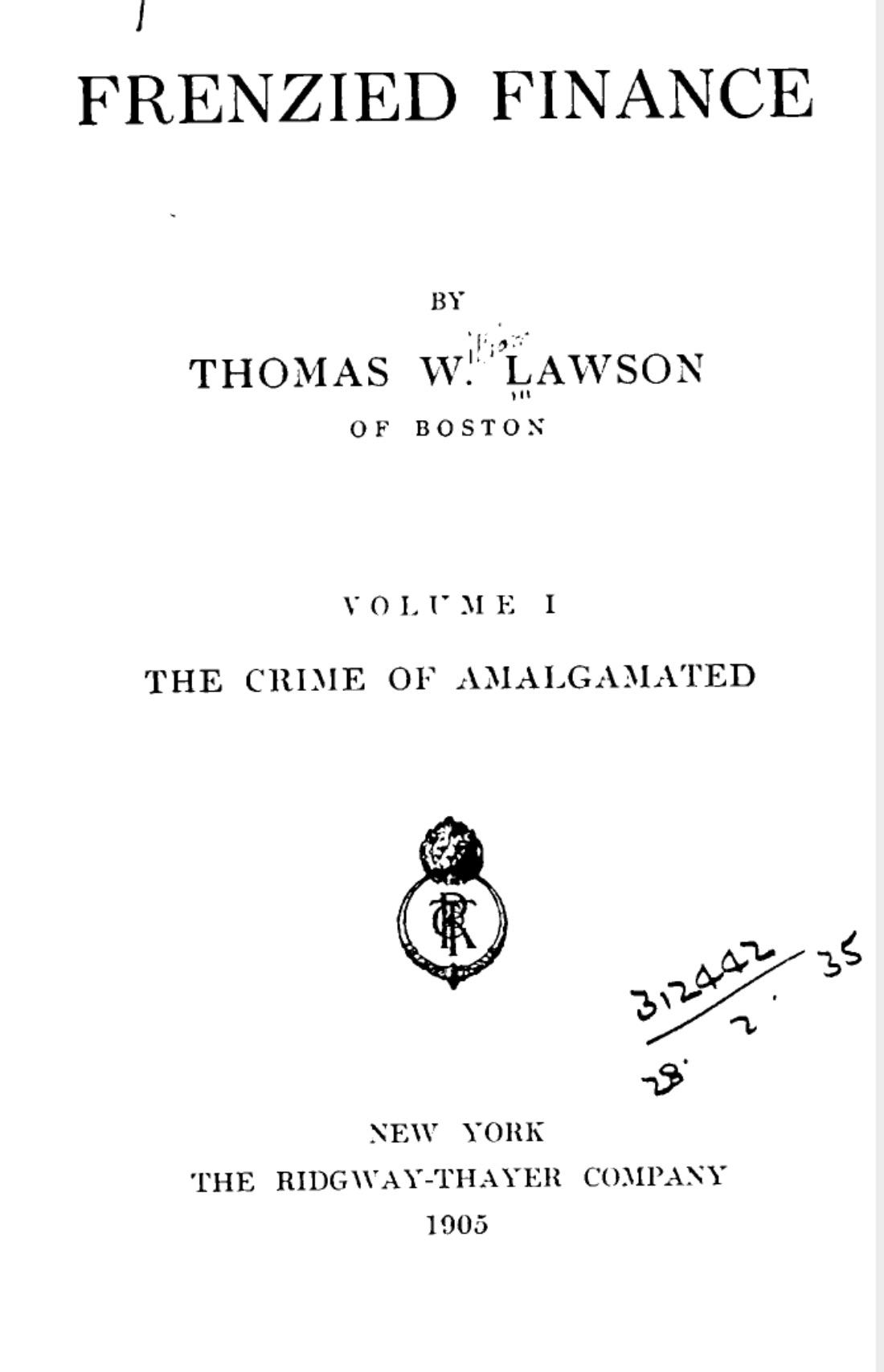 TO MY AUDIENCE SAINTS, SINNERS, AND IN-BELIEVERS

BEFORE you enter the confines of “Frenzied Finance,” here spread out‐for your inspection, at least; enlightenment, perhaps‐halt one brief moment. If the men and things to be encountered within are real‐did live or live now‐you must deal with them one way. If these embodiments are but figments of my mind and pen, you must regard them from a different view-point. Therefore, before turning the page, it behooves you to find for yourself an answer to the grave question:
Is it, the truth that is dealt with here? In weighing the evidence remember:

My profession is business. My writing is an incident. “Frenzied Finance ” was set. down during the twenty-fifth and twenty-sixth hours of busy days. I pass it up as the history of affairs of which I was a part. The men who move within the book’s pages are still on the turf. A period of twelve years is covered. So far, eighteen instalments, in all some 400,000 words, have been published. The spigot, is still running. I have written from memory, necessarily, While it is true that fiction is expressed in the same forms and phrases as truth, no man ever lived who could shape 400,000 words into the kinds of pictures I have painted and pass them off for aught but what they were. The character of my palette made it mechanically impossible to shade or temper the pigments, for the story was written in instalments, and circumstances were such that often one month’s issue was out to the public before the next instalment was on paper. Considering all this, the consistency of the chronicle as it stands is the best evidence of its truth.

In submitting it to my readers I desire to reiterate:

It is truth‐of the kind that carries its own bell and candle. Within the narrative itself are the reagents required to test and prove its genuineness. Were man endowed with the propensity of a Munchhausen, the cunning of a Machiavelli, the imagination of Scheherezade, the ability of a Shakespeare, and the hellishness of his Satanic Majesty, he could not play upon 400,000 words, or one-quarter that number, and make the play peal truth for a single hour to the audience who will read this book, or to one-thousandth part the audience that has already read it in Everybody’s Magazine.

Such as the story is, it is before you. If in its perusal you fathom my intentions, my hopes, my desires, I shall have been repaid for the pain its writing has brought me. At least you will find the history of a colossal business affair involving millions of dollars and manned by the financial leaders of the moment. It is a fair representation of financial methods and commercial morals as they exist in America at the beginning of the twentieth century. As a contemporary document the narrative should have value; as history it is not, I believe, without interest. As a message it has had its influence. Indeed, it is not an exaggeration to say that no man in his own generation has seen such a crop come forth from seed of his own sowing since the long by‐gone days when the wandering king planted dragons’ teeth on the Phoenician plain and raised up an army of warriors.