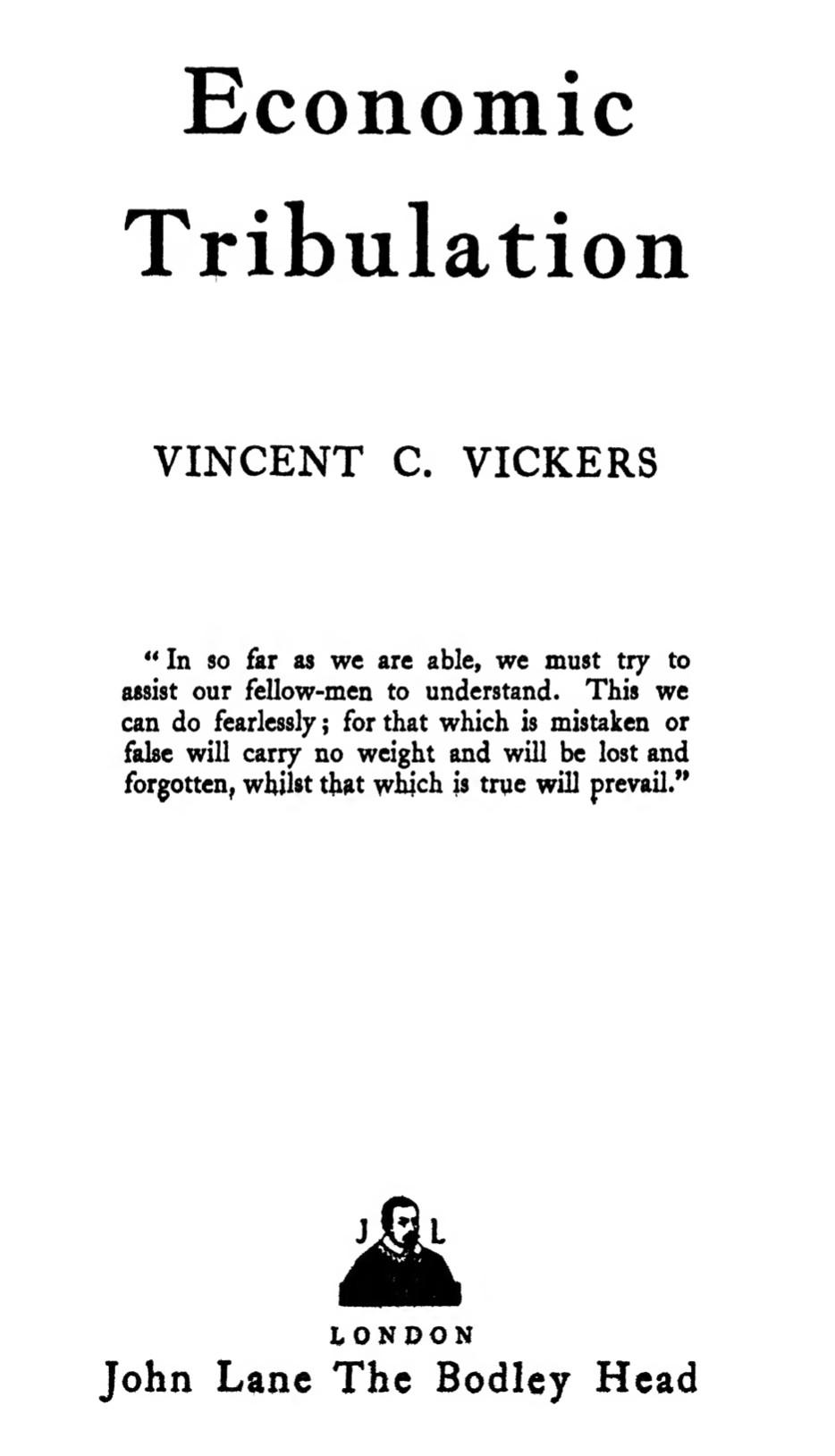 “In so far as we are able, we must try to assist our fellow-men to understand. This we can do fearlessly ; for that which is mistaken or false will carry no weight and will be lost and forgotten, whilst that which is true will prevail.”

VINCENT CARTWRIGHT VICKERS was born on 16th January 1879, and educated at Eton and Magdalen College, Oxford. He was DeputyLieutenant of the City of London, a director of Vickers, Limited, for twenty-two years, and a director of the London Assurance from which he resigned in January 1939. In 1910 he was made a governor of the Bank of England, and resigned this appointment in 19 I 9. Later, he became President of the Economic Reform Club and Institute.

He died on 3rd November 1939, after a long illness during which, against time and with failing strength, he was working and writing on economics. A few days before his death he wrote: 'My keen desire to help up to the end has been the sole incentive which still enabled me to carry on perhaps a few weeks longer.'

It has therefore been my privilege to arrange my father's papers into the book which he labored to finish, and which represents only a part of his ceaseless work towards national and international economic stability and his single-minded convictions of its attainment.

I who write this, need no proof of the importance of the money system upon the very lives of the people and even to the future existence of the British race, so long as that system fills the position which it now holds in our National Economy.

There are many thousands of well-educated men and women who, I believe, endorse my views in their entirety. But even for the most zealous of money reformers to attempt to write upon so vast and momentous a subject as our monetary system and the management of our national finances, such attempt would appear doomed to failure unless it were supported by great financial experts whose names were a by»word in the country. The next best alternative was that the author should himself be qualified by past experiences to express an opinion worth reading.

I therefore decided to take the unprecedented course of offering to my readers my own qualifications for putting down before the British people the very precarious condition of our monetary system as it exists in this country today; that this our money system forms the most important part of our economic system, and that the nation's economic system forms part of our social system.

Ever since that day in I 926, when, not in arrogance but with humility, I felt it my duty to explain to the Governor of the Bank of England, Mr. Montagu Norman, that 'henceforth I was going to fight him and the Gold Standard and the Bank of England policy until I died'--(and well I remember the words of his reply)-I have been an ardent money reformer. Some few years afterwards I resigned my long directorship of Vickers, Limited; since when I have spent much time and money in advocating the necessity for a reform of the monetary system. This has naturally brought me into contact with most sections of the community; with Communists and those with axes to grind, with malcontents and debtors, and, in addition, with men and women who are honest and disinterested patriots. Not more than a tenth of my income is earned; the rest comes from investments in banks, Bank of England stocks, American and Canadian securities, etc., and, mainly, from British industrial securities. I am therefore a 'capitalist'--one who has seen better times---and content to remain in my present financial position, but most unwilling to have my present standard of living further reduced. I bear no ill-feeling towards my own class or any other class. I seek neither notoriety nor kudos. If someone can change my convictions I shall be only too ready to alter them. But in fifteen years nothing whatever has occurred to make me alter my views. I still believe that the existing system is actively harmful to the State, creates poverty and unemployment, and is the root cause of war.

This personal confession is merely to demonstrate that I have seen both sides of the picture. My opinions are based upon my own experience and knowledge. I am to-day in the unique position of being absolutely and entirely devoid of animosity and wholly dis- interested. I feel myself no longer under any restrictions whatsoever, except to guard against doing harm to my country or giving offence to anyone.