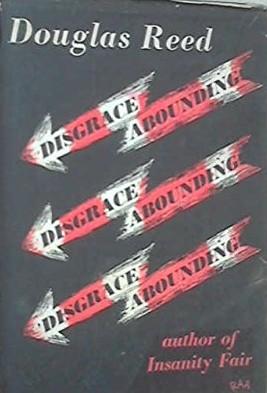 Douglas Reed (1895 – 1976) was a British journalist, playwright, novelist and author of a number of books of political analysis. He was The Times correspondent in South-eastern Europe during which he was witness to the prevailing political machinations and social conditions.

His book Insanity Fair (1938) was influential in publicising the state of Europe and Hitler’s “megalomania.” Its follow-up Disgrace Abounding (1939) suffered a different fate: Organised Jewry soon realised its truths were inconvenient to them and their cause and so ensured it was routinely condemned by the liberal press, reviewers and commentators.

Reed had witnessed the appalling conditions of the Christian people, especially the peasant, in what is now Ukraine and Moldova. Especially their condition of servitude to “the Jews.” Reed’s crime was that he reported it honestly, unlike many other Western observers who had witnessed the same evil but had reported the exact opposite. Reed reported on the dire conditions in Christian East Europe. The lands in which Khazarian Jews were a significant minority. The lands in which White Christians had a long, intimate relationship with “the Jews.”