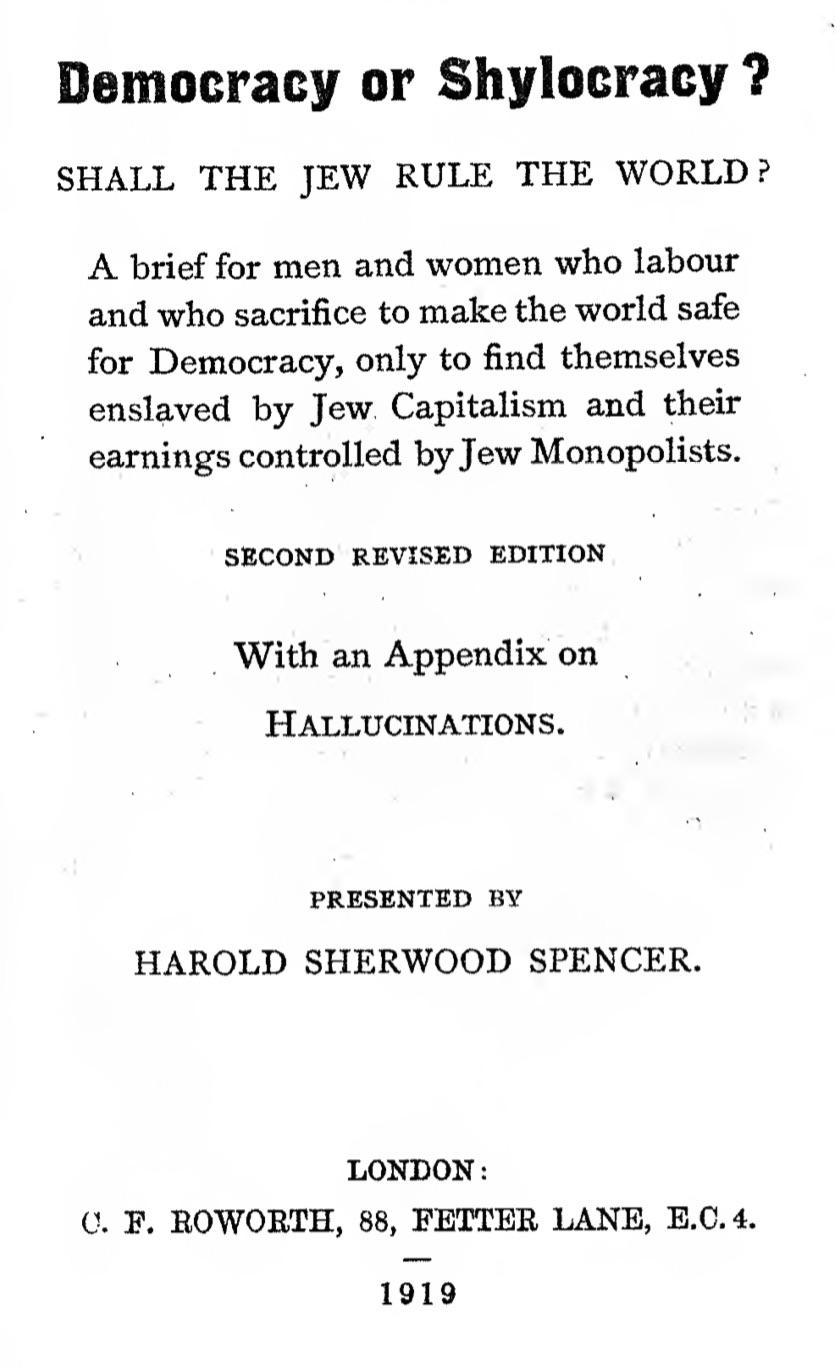 "The Jew and his Bank are to-day the masters of all Europe — of Education, of Civilisation, of Socialism : of Socialism above all, by means of which the Jew is going to tear up Christianity by its roots and destroy its Civilisation. And when nothing but Anarchy remains the Jew will put himself at the head of all. For while propagating Socialism among all the Nations, the Jews will remain united among themselves; and when all the wealth of Europe is dissipated there will still remain standing the Jew's Bank."

I hate him for he is a Christian;
But more, for that, in low simplicity,
He lends out money gratis and brings down
The rate of usance here with us in Venice.
. . . Cursed be my Tribe
If I forgive him !

I will have the heart of him if he forfeit : for were
he out of Venice, I can make what merchandise I will.

Hates any man the thing he would not kill ?

I stand here for Law.

... Tarry, Jew;
The Law hath yet another hold on you.
It is enacted in the laws of Venice,
If it be proved against an Alien,
That by direct or indirect attempts
He seek the life of any Citizen,
The party 'gainst the which he doth contrive
Shall seize one half his goods; the other half
Comes to the privy coffer of the State
And the offender's life lies in the mercy
Of the Duke only.

"There can be no doubt that Shylock was a Jew and not an Italian."

A brief for men and women who labour and who sacrifice to make the world safe for Democracy, only to find themselves enslaved by Jew Capitalism and their earnings controlled by jew Monopolists.

There is one enemy power against which our Government has never declared war, and that is the power wielded by the International financiers under the suzerainty of the Shylook of Frankfort.

We declare to the world that we are a Democratic Empire, fighting to make the world safe for Democracy. In truth, Britain is not a Democracy at all but a Shylock-racy, and the dancing puppets of Westminster, who move and talk as King Shylock pulls their strings, are merely political marionettes.

If Britain really wishes to be a Democracy, the British people will, on their own account, have to declare war on Shylock, and replace the political marionettes with something real and true to Humanity and not placemen of a Tribal purse.

This book makes no pretence at originality, and is submitted only as a brief of the case against Shylocracy. In the Cult of the Coin, much is due to Dr. Clarke, not only for personal inspiration, generous use of his letters and notes, also for that part of this brief which is taken entirely from the Call of the Sword.

A Desert People is largely a translation of Sombart, interwoven with data collected by George H. Shibley, Director of the Research Institute of Washington, D.C.

The No-Money Islands is from Arthur Kitson's recent exposure of the fraudulent character of our monetary standard.

The Victory is from a source known to all who acknowledge the teaching that man may believe in his heart that which his head has sanctioned.

The whole is presented in order that expression may be given to ideals now silently shaping in many hearts—ideals which in time will bind all men together in a common work for universal good.