Death - The Murder of General Patton (1993) by Stephen J. Skubik 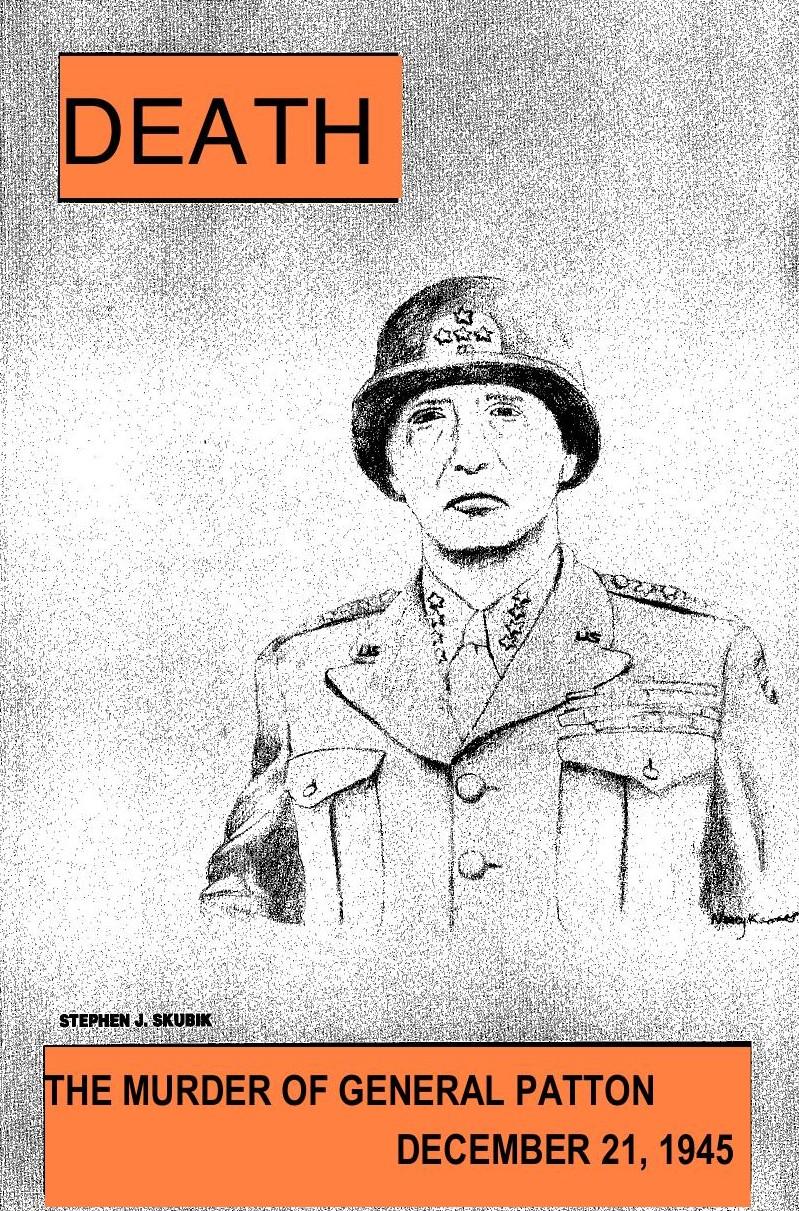 It is my intention to explain the circumstances which lead me to believe: that General George Smith Patton, Jr. was murdered, that the accident which took place on December 9, 1945 was set up by the Soviet NKVD (Narodny Komissariat Vnutrennildi Del) in collusion with the American OSS (Office of Strategic Services), that Patton died at the Heidelberg Military Hospital on December21 at the hands of an assassin.
It is impossible to prove who actually did the killing since no one at the hospital reported witnessing the murder. The trained NKVD assassin would have entered the room disguised as a hospital attendant.

It is not my intention to even try to prove that Patton was murdered. I wish only to refute the official line which military historians state that Patton's death resulted from a broken neck sustained in the auto accident near Mannheim.

Yes, the collision took place as they write, but it was a planned accident. Patton was disabled, but, by what means? Did an assassin fire a weapon at Patton as he sat in the back seat? A Douglas Bazata claims that he had been hired to assassinate Patton by General Donovan, head of the OSS. He charges that another agent NKVD or OSS beat him to the kill. He explains the kind of weapon which was used. l can not verify Bazata's story.

I have spoken to Bert Goldstein, one of Patton's body- guards during that time. Bert told me that Patton's lite was threatened, that he was vulnerable to the ever present danger. Bert states, that had the bodyguards not been removed Patton would not have been murdered. He is convinced that his favorite General was murdered.

I have also spoken to Robert Patton, who served with his cousin General Patton in North Africa, Sicily and Germany. He states that there are members of the Patton family who agree with him that the General was murdered. He told me that I should consider Colonel Charles Keegan as a conspirator in the murder.

Ladislav Farago, in his book THE LAST DAYS OF PATTON, provides significant detail about the accident and about the hospital scene, but even as he discusses the possibility of murder, he accepts the official story that Patton died of heart failure brought about by a broken neck sustained in the so-called accident.

Fred Ayer, Jr., Patton's brother-in-law, was a Counter Intelligence agent with the Federal Bureau of Investigation, in Germany. When he heard of the accident he said, "Accident hell. It was murder. Those communist sons of bitches killed him".

I was in the Third Army as a Counter Intelligence agent while Patton was the General. The CIC was involved with others in providing security for him. It was my informants from the Ukrainian Insurgent Army (UPA) who told me that Soviet Dictator Joseph Stalin wanted Patton assassinated and ordered the NKVD to kill him. The fact that UPA General Stepan Bandera was himself assassinated, and UPA/NKVD agent Ivan Malij was executed by the NKVD, lead me to believe that they were killed to silence them about the Patton assassination. .

I was given a bad time by NKVD General Davidov, who was head of the NKVD at SHAEF in Frankfurt, and by OSS General Donovan, because I reported about the Stalin order to the NKVD to kill Patton. Also my own life was threatened because it was thought that I knew too much. I was considered having "political dynamite". I suppose that had I beef allowed to investigate the Ukrainian intelligence reports of Patton's murder, I would have proof positive, one.way Or the other. But since I was denied the right to make such an investigation, I can only write of the circumstances which lead me to believe that the historians have not completed their research on the death of Patton.

Of course it may be too late to discover the truth about Patton's death, especially since so many records have disappeared. Also since so many of those people in the know have either died or disappeared, it can only frustrate historical researchers.

The main purpose of my writing what I experienced, what I knew and what I suspect, is to caution those who have accepted the official line about the so-called accident and the subsequent death of General George S. Patton, Jr. I say,
"Don't believe it."

My book is broken up into four parts. PART ONE deals with my own experiences in the Counter Intelligence Corps and my Ukrainian connection. PART TWO is a short bio- graphical sketch of George Patton as a boy, a man and a soldier. PART THREE is about Patton as a General serving under General Dwight Eisenhower. It was clear that Eisenhower was a long time friend of Patton's who eventually turned against him. PART FOUR deals with the death and suspected murder of Patton. In it, I explain why I believe he was murdered. I do not attempt to prove my contention because I cannot. All I can do is to theorize on how and by whom the murder was plotted and executed.

Steve had personal experiences with the NKVD, the Soviet Union's State Security Agency, during his work as a Special Agent with the United States Army Counter Intelligence Corps, in Germany from January through December, 1945.

He also dealt with the O.S.S., the Office of Strategic Services, led by General William "Wild Bill" Donovan, with whom Steve disagreed on a number of occasions in Germany. He objected to the O.S.S. recruitment of Communists such as Walter Ulbricht and Ho Chi Minh into the agency.

His arrest of Walter Ulbricht and his accusing NKVD General Davidov of plotting the murder of General George S. Patton, Jr., caused him much trouble with the O.S.S. and his superiors in the Counter Intelligence Corps.

His story about the murder of General George Patton in Heidelberg, Germany in December , 1945 is his recount of events which lead him to believe that the NKVD and the OSS colluded in the murder. He describes the coincidences such as the auto accident near Mannheim on December 9 just one day before Patton was to leave Germany: the death on December 21 at the Heidelberg Military Hospital as he was about to be moved to Beverly General Hospital: the presence in Germany of Soviet General Pavel Sudoplatov, head of theNKVD's external assassins during the time of the accident: and his being denied the authority to investigate the accident. Steve's contention is that such coincidences are highly suspicious.

Beside the suspicious coincidences, Steve had been in formed by the Ukrainian intelligence that Stalin had ordered the death of Patton because Patton was calling for war against the Soviet Union to force the Soviet armies back to Moscow. Patton's incursion into
Czechoslovakia in early May caused the Soviet Military High Command to threaten General Eisenhower with all out war.

Steve Skubik tells of how after General Eisenhower stood with Soviet Dictator Joseph Stalin on the tomb of Lenin, Eisenhower fired Patton as the Commander of the Third Army .

Steve became involved in national politics when he lived in Alexandria, Virginia from 1947 through 1981. He wrote the Republican Policy of Liberation in 1952, which called for the. dissolution of the Soviet Empire.

His political humor books, REPUBLICAN HUMOR; POLITICS IS FUN and HANDBOOK OF HUMOR BY FAMOUS POLITICIANS, show the lighter side of the author.