Home Books CONFESSIONS OF A BRITISH SPY AND BRITISH ENMITY AGAINST ISLAM (2016) by M.Sıddık Gümüş

CONFESSIONS OF A BRITISH SPY AND BRITISH ENMITY AGAINST ISLAM (2016) by M.Sıddık Gümüş

CONFESSIONS OF A BRITISH SPY AND BRITISH ENMITY AGAINST ISLAM (2016)

The Islamic World's "Protocols of Zion", supposedly published in Turkey, 1888. 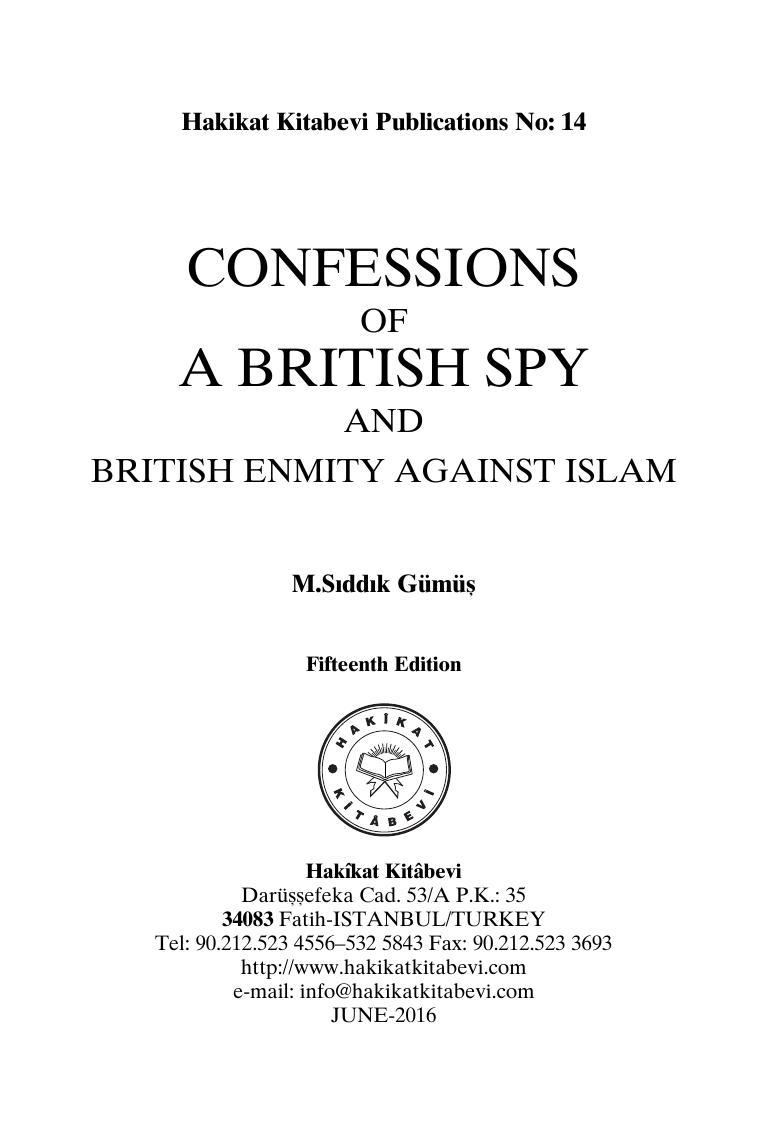 Allâhu ta’âlâ declared in the eighty-second âyat of Mâida sûra of Qur’ân al-kerîm, “The biggest enemies of Islam are the Jews and mushriks.” The first mischief contrived to demolish Islam from within was instigated by a Jew, namely Abdullah bin Sebe’ of Yemen. He established the Shiite sect against the Ahl as-sunna, the true Muslim group. From then on, Jews under the cloak of Shiite scholars in every century consolidated this sect. After the Ascension of ’Îsâ ‘alaihissalâm’ a number of corrupt Bibles were written. Most of the Christians became mushriks (those who believe in more than one god). Others became kâfirs (disbelievers) since they did not believe Muhammad ‘alaihissalâm’. These and the Jews were called Ahl-i kitâb (people with a heavenly book). When Islam was established, the hegemony of the priests, as in the Dark Ages, was abolished. They founded missionary organizations to abolish Islam. The British were the forerunners in this regard. A Ministry of the Commonwealth was established in London with a view to fighting against Islam. People who worked in this Ministry were taught the Jewish tricks. Contriving inconceivably vicious plans, they attacked Islam using all available military and political forces toward this end. Hempher, only one of the thousands of male and female agents employed and sent forth to all countries by this ministry, entrapped a person named Muhammad of Najd in Basra, misled him for several years, and caused him to establish the sect called Wahhâbî in 1125 [1713 A.D.]. They announced this sect in 1150.

Hempher is a British missionary who was assigned the task of carrying on espionage activities in Egypt, Iraq, Iran, Hidjaz and in Istanbul, the center of the (Islamic) caliphate, misleading Muslims and serving Christianity, by means of the Ministry of British Commonwealth of Nations. No matter how assiduously the enemies of Islam may strive to annihilate Islam, they will never be able to extinguish this light of Allâhu ta’âlâ. For Allâhu ta’âlâ declares as follows, as purported in the twelfth and sixty-third âyats of Yûsuf sûra and in the ninth âyat of Hijr sûra of Qur’ân al-kerîm: “I have revealed this Qur’ân to thee. Verily I shall be its protector.” Disbelievers will not be able to desecrate it, change it or defile it. They shall never extinguish that light. Allâhu ta’âlâ sent Qur’ân al-kerîm to His beloved Prophet Muhammad ‘alaihis-salâm’ piece by piece in twenty-three years through His angel named Jebrâ’îl. Abû Bekr “radiyallâhu ta’âlâ ’anh”, the first Khalîfa, had the 6236, âyats which were sent by Allâhu ta’âlâ, compiled, and thus the great book named Mushaf was formed. Muhammad ‘alaihis-salâm’ explained the whole Qur’ân al-kerîm to his As-hâb. The Islamic scholars wrote down whatever they heard from the As-hâb-i-kirâm. Thousands of books of tafsîr (explanation) thus formed were published in every country. All copies of Qur’ân al-kerîm existent throughout the world today are identical. There is not even a single literal or diacritical difference in any of them. For fourteen centuries Muslims worked in the lightsome way taught by Qur’ân al-kerîm and made progress in knowledge, in ethics, in science, arts, trade, and politics. They established great States. After the French Revolution in 1204 [C.E. 1789], European youth saw the immoralities, cruelties, robberies and mendacities being perpetrated by churches and priests, and, as a result, some of them became Muslims, while others turned into atheists. The farther away from Christianity, the more progress they made in science and technology. For Christianity was an impediment to worldly endeavours and progress. And some Muslims, reading the books written by these young people in order to criticize Christianity, and believing the lies and slanders which the British missionaries directed against Islam, became quite ignorant of Islam. As they were alienated from Islam, they began to decline in science. For one of the principal commandments of Islam is to work for worldly progress.

The British state policy is essentially based on methods of exploiting the natural riches of the world, particularly those in Africa and India, employing their inhabitants like beasts, and transferring all the resultant revenue to Britain. People who have had the fortune of attaining Islam, the religion which commands justice, mutual love and charity, pose an obstruction athwart to British cruelties and falsities.

We have prepared this book of ours in three sections:

The first section, which consists of seven parts, comprises the slanders of the British spy. They were designed by the British for the purpose of annihilating Islam.

The second section relates how the British insidiously put their treacherous plans into practice in Muslim countries, how they deceived statesmen, how they inflicted unimaginably bitter torments on Muslims, and how they destroyed the Indian and the Ottoman States. How the Jews and the British attacked Islam is reported with quotations from Hakîkat-ul-Yehûd, which was written by Fuâd bin Abdurrahman Rufâî and published by Mektebetussahâbetul Islamiyye in Kuwait-Safât-Salimiyya. This section of our book is corroborated with documents which will awaken those poor Muslims who are entrapped by the Wahhabis and will support the writings of the scholars of the Ahl as-sunna.