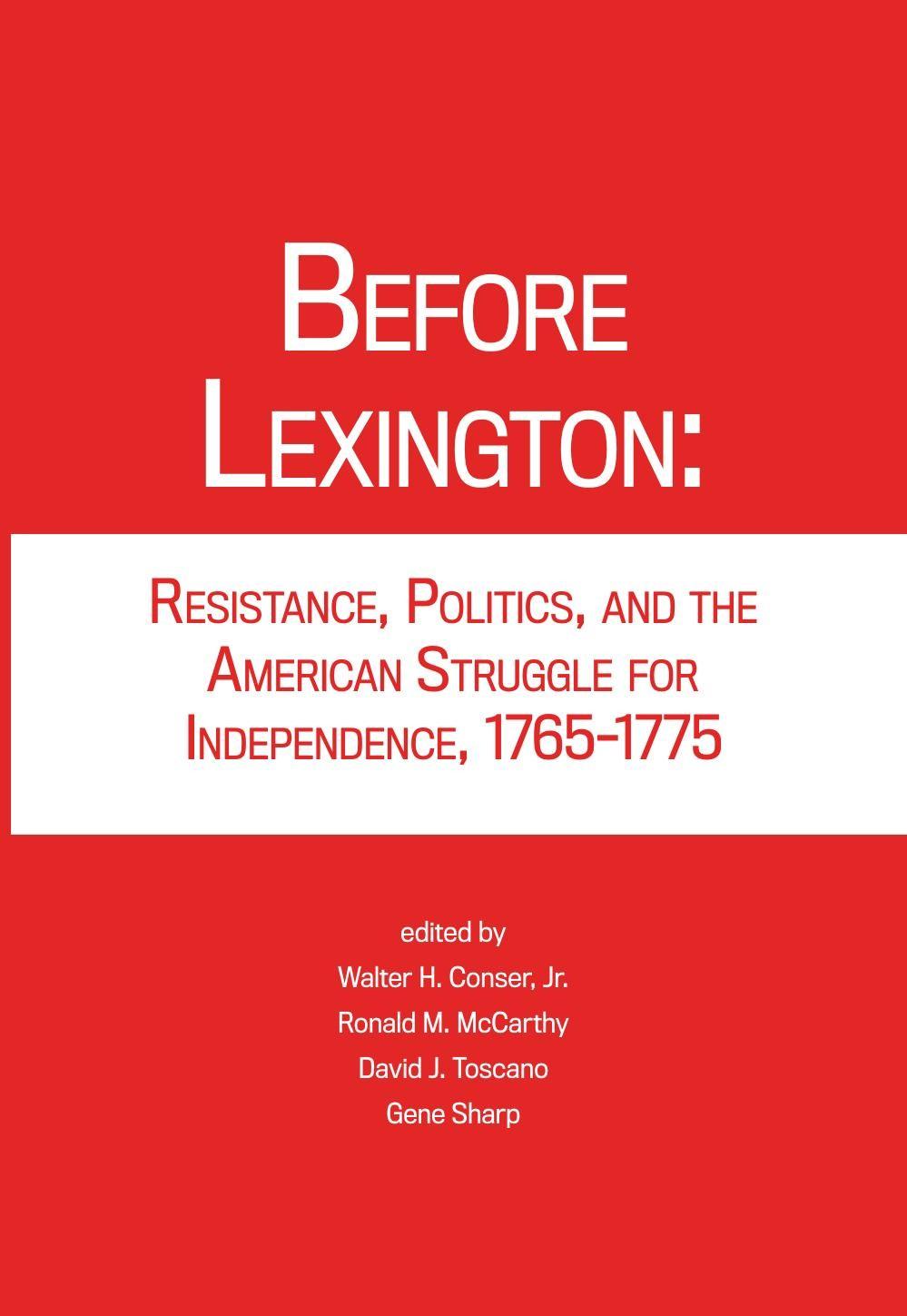 PREFACE TO THE 1986 EDITION

The struggle for American independence has captured the attention of American historians since the beginning of our history as a nation. Since the time that writers first began examining the conflict, scholars have presented their interpretations of the events of the period, suggested reasons for their occurrence, and explored the significance of the events in America from the end of the Seven Years’ War to the Treaty of Paris. Beginning with the resistance to the Stamp Act in 1765, these studies typically highlight the battles of Lexington and Concord and the exchange of shots between British soldiers and American colonists. In these interpretations, the events between 1765–1775 are not significant in themselves, but rather are only a prelude to the war.

Our book questions this assumption and suggests that these forms of resistance—primarily nonviolent ones— pursued by the American colonists from 1765 to 1775 were of fundamental importance themselves for the outcome of the struggle for independence, shaping the growth of new political, economic, and social institutions which could sustain truly independent self-government.

The editors’ interest in this decade began in the early 1970s, when we were involved in researching the use of nonviolent action as a pragmatic tool of civilian struggle. In our work, we discovered a large number of events in American colonial history—boycotts, nonimportation, noncooperation, and protest demonstrations of many kinds—all of which could be described as examples of nonviolent action. Indeed, the incidence and successes of nonviolent resistance seemed so significant that we were surprised that the subject had received so little attention. Although many scholars have described the decade in great detail, the richness and importance of the nonviolent activity was lost because of their emphasis on a seemingly inevitable rush toward war. This book demonstrates that the movement for independence was more complex than conventional analysis might have us believe.

Students of American colonial history are all too familiar with the many edited books in the field. Frequently in such studies, the articles are unconnected beyond a shared theme. This book is different. The chapters in this volume, most of which have never been published previously, relate integrally to one another and provide a complete narrative of the period. Our contributors are highly respected American and British historians whose writings are well known and whose scholarship is of the highest quality.

We recognize that no study is exhaustive or absolutely final. We realize that this book, if read carefully, is likely to spark scholarly controversy and argument. We welcome these discussions for we believe that such debate can clarify the issues explored in this volume and enhance the understanding of this critical decade in our history.

PREFACE TO THE 2015 EDITION

Important international political developments have taken place since 1986 when this book was first published. After several years of nonviolent struggle, a non-Communist government was established in Poland in 1989. In the same year, East Germans, who had organized massive non-violent demonstrations in major cities, watched the Berlin Wall crumble as did the Communist Party’s control. Parallel nonviolent struggles occurred in Czechoslovakia and removed its Communist leaders. The independence movements that swept the Baltic states of Latvia, Estonia, and Lithuania from 1987–1991 were also nonviolent. Similarly, the hardline coup in the Soviet Union seeking to oust Mikhail Gorbachev and restore a strong dictatorship in August 1991 failed in the face of massive nonviolent opposition. Other cases of nonviolent struggle in South Africa, the Philippines, Burma, Thailand, and Serbia, and later in Egypt and Tunisia, also made the news in both the United States and throughout the world.

Public awareness of vigorous, disciplined, and successful campaigns of nonviolent struggle has grown as a result of these experiences. Americans are often familiar with the use in their history of nonviolent action in the labor movement or the civil rights movement. Too few realize that because of the struggle during the years 1765–1775, Americans achieved de facto independence from the British through nonviolent means in a majority of the thirteen colonies.

Moreover, in the decades since 1986, many scholars have also published a variety of works on nonviolent struggle, including detailed studies of nonviolent campaigns bringing down dictators in Central America, nonviolent resistance against Nazi rule and control, or other struggles in the contemporary world. Additionally, research guides and bibliographies concerning the history, methods, and dynamics of nonviolent action as well as strategic studies of nonviolent conflicts have also appeared. This body of scholarly work is substantial and growing, though the need for further research is imperative.1

The editors of this book deliberately designed its structure to model a case study of nonviolent struggle. There are lengthy descriptive chapters on the resistance against the Stamp Act, the Townsend Acts, and the Coercive Acts taking place during 1765–1775.

Discussion of American developments is complemented by other chapters describing the responses by the British political and mercantile communities to the American nonviolent efforts. By focusing on both sides of this Atlantic world, one is able to see in detail the organization and implementation of the colonial resistance campaigns, the British perceptions and responses, and, finally, any subsequent strategic adjustments made by each side.

Additionally, the volume is divided between descriptive chapters, drawn from primary documents of the time period, and analytical chapters that evaluate the impact of each struggle. Here assessments of strategy and tactics, of commercial and political resistance, of the employment of ideological resources and third-party alliances, and of the significance of parallel governmental institutions come to the fore. Attention to description, grounded in contemporary sources, and to analysis, reflecting strategic issues, allows for a fuller understanding of these particular historical episodes.

As currently the only sustained examination of the nonviolent struggle for political independence by the American colonists, this volume demonstrates

• the campaign against the Stamp Act nullified its enforcement in America and brought about its repeal, despite face-saving statements to the contrary by British politicians.
• the nonimportation agreements utilized against the Townshend Acts in 1768–1770 reduced trade with Britain. The strategic lessons of the need for unified action were applied to the later campaigns of 1774–1775.
• by early 1775 the establishment by Americans of hundreds of grass-roots, participatory, and purposeful committees to enforce the Continental Association had shifted the balance of power in the colonies. These committees—varying in size but deliberate in action—in fact governed in most of the colonies.
• America was politically independent from Britain prior to the battles at Lexington and Concord in April 1775.
• colonial Americans adopted nonviolent struggle as a strategic decision regarding the most effective means of resistance; however, they did not have a thorough familiarity with the nature of this technique. They did not understand that British power was so completely undermined by 1775 that the British military response was one of desperation. Ultimately, the colonists saw no other way to respond except by their own military capacity.
• while strategic thinking by the Americans did take place, there was insufficient attention given by the Americans either to recognizing the importance of the shift from nonviolent action to military force or to anticipating the broader consequences of this shift. The reduction of mobilization among the population, the subsequent polarization of American society, the realignment from broad-based committee decision-making to that of the command structure of the military, and the diminution of third-party British support—all of these dynamics occurred within the context of the change from nonviolent to military struggle.Recognition of the significance of these insights is crucial for an adequate comprehension of the process of achieving American independence. Likewise, it enhances a fuller understanding of the role of nonviolent struggle in American history.