Home Books All These Things (1936) by Arthur Nelson Field

All These Things (1936) by Arthur Nelson Field 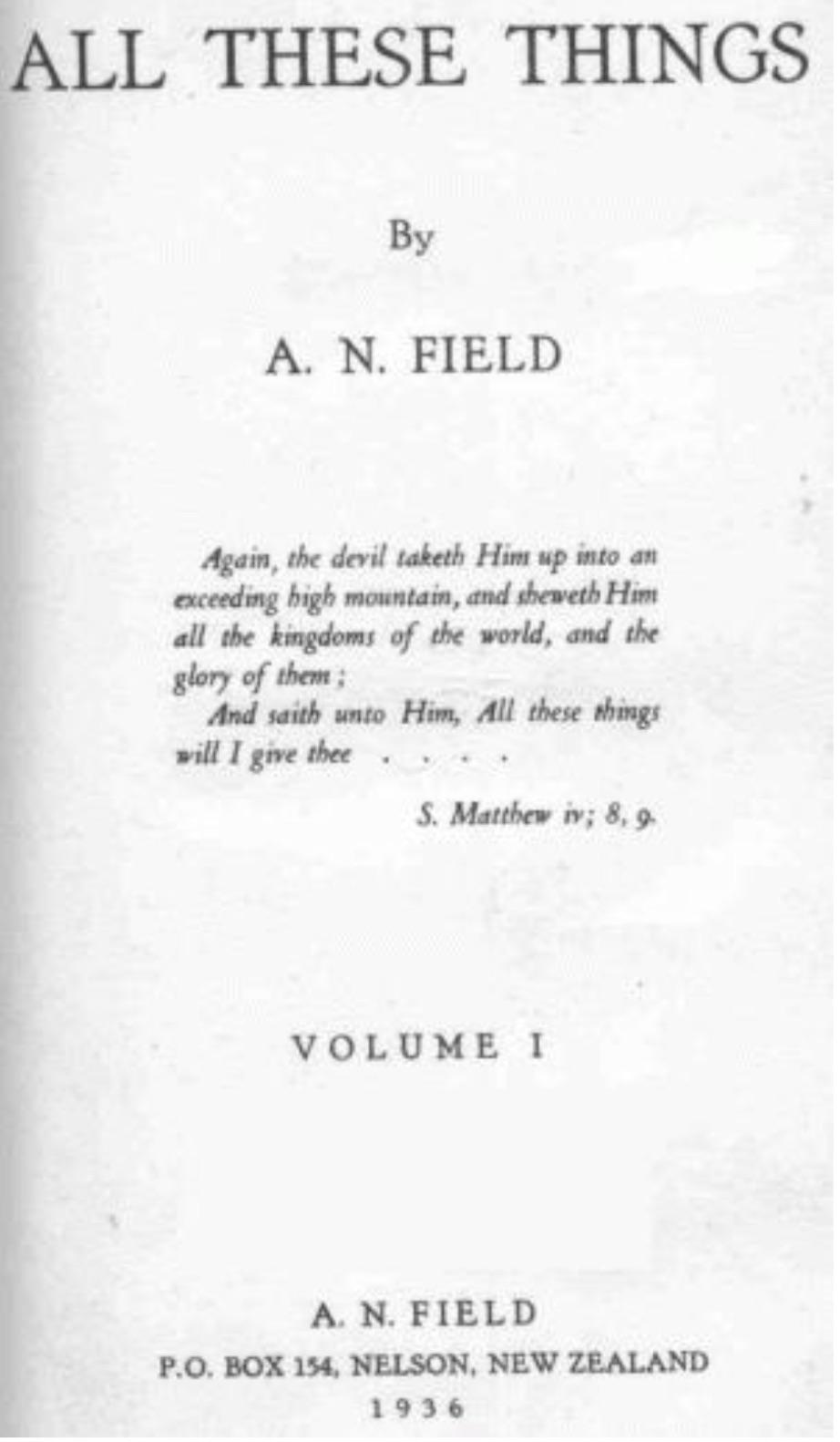 THIS book is an assemblage of matter from many different sources exhibiting the nature and interconnection of certain world forces operating in many lands and making for the overthrow of the existing social order and the disintegration of patriotism, religion, and morality.

These influences are felt almost every day by every intelligent person. It is commonly assumed that the changes in opinion, conduct, and institutions which are taking place are, on the whole, changes for the better: that they represent progress and evolution from a lower to a higher and freer form of life. It is further widely assumed that they are a spontaneous growth.

Such was the author's own view until he was led some years ago to investigate the personnel behind certain great financial institutions. The facts encountered at first appeared incredible to him, but the further he went the more complete was the confirmation of their truth. The matter then collected was published in 1931 in a former volume The Truth about the Slump.

Since then a large amount of matter has come to hand showing the operation of the same forces in other fields. A library of books might be collected dealing with different aspects of the subject, but as there appears to be nothing in the nature of a general conspectus covering the whole field it seemed that something of this kind might serve a useful purpose. The material collected to date has been drafted into twenty-eight chapters, of which the first seven appear in the present volume. It is hoped to publish the remainder of the material in later volumes completing the work.

The present volume is self-contained, but it is necessary to remind the reader that what is here presented covers only a small portion of the ground, touching on certain leading events during the past quarter of a century from 1912 to the present day. To bring the whole picture into perspective it is necessary to range much further afield.
Culled from a great variety of sources, the matter brought together is of varying degrees of validity. Writing in New Zealand, far away from the centre of events and the great libraries of the world, the author has had but limited opportunity of checking his matter to the full. He has, however, endeavoured to make some check of the general accuracy of every source used. These sources are named throughout, and the reader is thus in a position to proceed with independent check and verification on any point desired. In general, the further the research has been carried the more completely have the main facts been confirmed and amplified.

A great part of the activities described traces back to Jewish origin. This fact is quite inescapable; and it is quite impossible to arrive at any true understanding of the matters dealt with if it is ignored. At the same time it is necessary to remember that although certain Jews, or groups of Jews, are found engaged in activities detrimental to the interests of other races, it is unjust to jump to the conclusion that all Jews necessarily support or sympathize with the doings of these Jews. A fair-minded man should at all times be on his guard against drawing wide and sweeping inferences far beyond what any evidence will support. The truth can only be got at by proceeding on from fact to fact.

All that the author asks is that the reader, whatever his race, should temperately and calmly consider whether the unchecked operation of the forces herein described is likely to make the world a better or a worse place. A great aggressive power is at work in the world boring, undermining, and overthrowing. Every effort is made to prevent knowledge of what is happening from reaching the people. Only by that knowledge can the nations avert the dangers threatening them.

The publication of the remainder of this work will depend upon the reception with which the present volume meets. Readers desiring to secure copies of the second volume, or further volumes, are therefore invited to notify the undersigned.

Note the date of this page has been corrected to 1936 based on the Preface, although the filename/URL is 1934