Adl-Tabbatai (like the ADL and Sabbatai Zevi is probably just a cohencidence!)

Some snippets and notes and research.

TPV was created to give a platform to suppressed information that the mainstream media ignores or ridicules and in that sense it has been successful with more than 5,000 hours of such information broadcast from around the world 24 hours a day since November 2013.

Its major problems have come from not being able to attract advertising and sponsorship to pay ongoing running costs and because, in among the many thoroughly decent and committed people who have been involved, it has attracted some of the most poisonous, manipulating, me, me, me self-obsessives you could ever meet.

Certainly, I have rarely experienced so many such characters passing through one location. This has meant ongoing abuse from those who didn’t get what they thought TPV would give them and this has generated a lot of negativity and put off potential advertisers and sponsors.

To set up forums to seek to destroy something created to alert people to the nightmare that is unfolding for everyone – the ISIS situation in the Middle East is the start of a whole new deeply disturbing stage – has to be, in my view, an extreme form of mental illness.

I agreed when the idea for TPV was mooted to give it my full-time commitment as an unpaid volunteer until February 2014. This I did at great cost to myself financially and in terms of my health and I returned home to continue my other work on March 1st as I always said that I would.

TPV has struggled on since then financially with stalwarts like Richie Allen, who is totally committed to its ethos, and I have supported when necessary from afar. But I have now been told by the TPV director, Sean Adl, and his marriage partner, that my input is no longer required and that I should not ‘interfere’ in what Sean Adl calls ‘his business’.

In fact, it is and has always been The People’s business and everyone else involved have been purely custodians. This ethos has now been lost, not least because of people brought in who are clueless both about the ethos and the information that TPV was created to communicate.

I am also perturbed that a part-time bookkeeper that I brought in at the start because of her honestly and integrity has been fired in the last few days with a two-line email after the best part of a year of diligent work.

I will still be happy to appear on any show presented by Richie Allen, or outside contributors, because the information is what matters, lest anyone forget, but I wanted to make it clear that I am no longer attached in any way to TPV which is very sad, but there we are.
The saddest thing that the TPV experience has shown me is that the number of people who are totally committed to making a difference and putting personal and petty desires and prejudices aside to that end are still tragically few.

Me, me, me is the disease that got humanity into this mess and it is certainly not going to get us out of it.

"... former webmaster of http://Davidicke.com, he is one half of Londons first Gay married couple, he is also the man behind the short lived ‘The Peoples Voice’ streaming TV station." 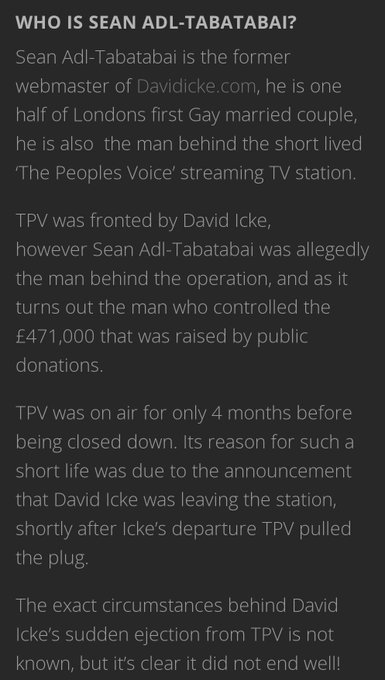 "But it was a meeting with David Icke — the former BBC presenter who announced that he was the son of God on Wogan in 1990 — that he describes as “the biggest step” to what he does now." 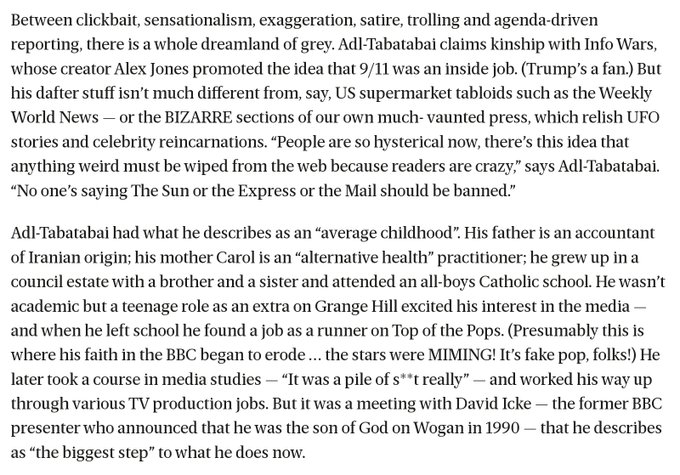 "Let’s start this little journey into David Icke’s “Twilight Zone” by first taking a close look at the BBC and how they do things. You will see why… promise! 🙂" 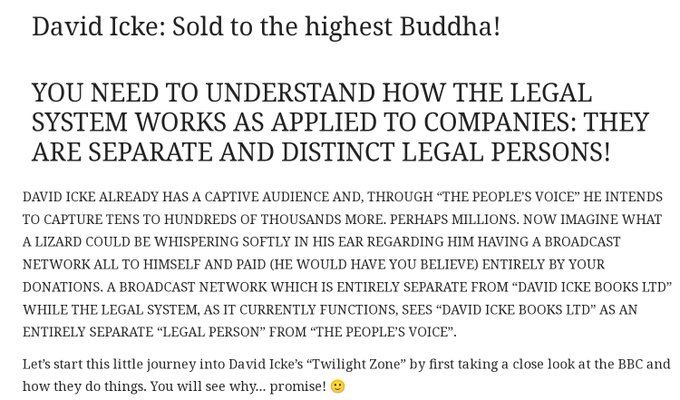 The future of TPV
!

"Mark Windows was to replace Sonia"

"Mistakes were made" so now there is https://ickonic.com

Companies House - Click "People" tab, David is not one of them but his sons are. It's a family business. 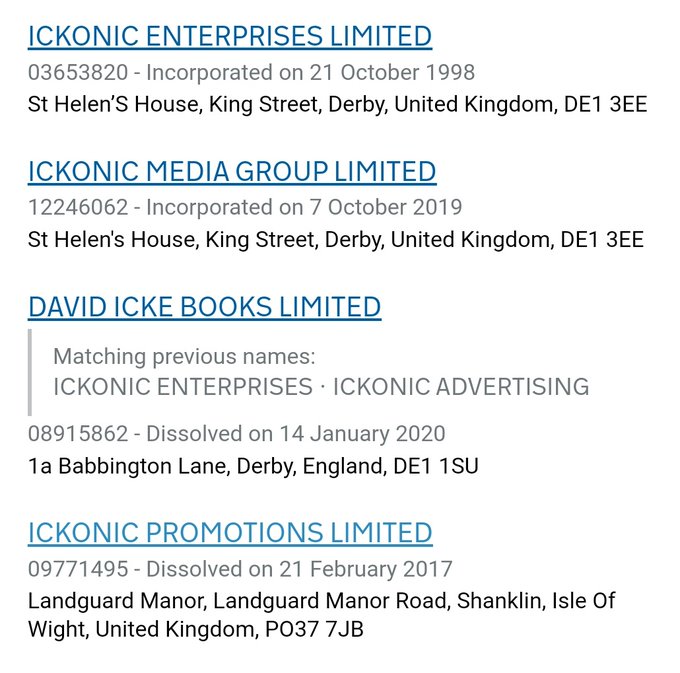